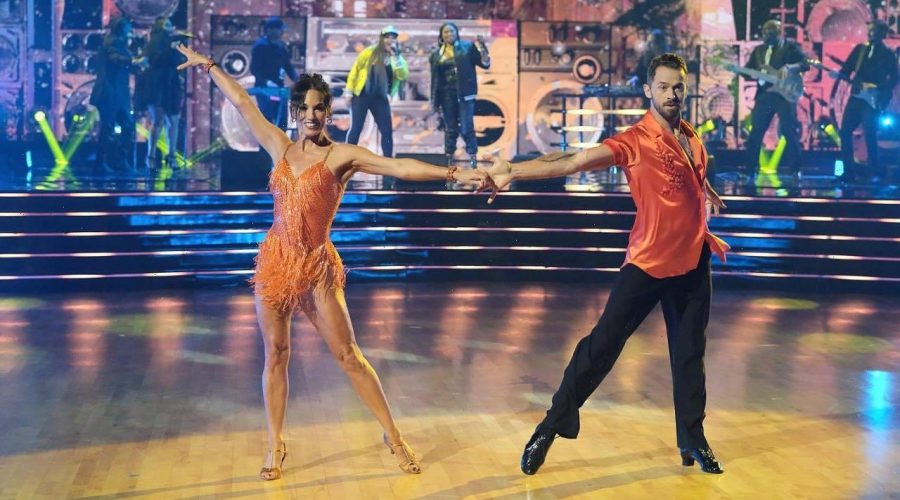 Two pairs at the bottom of the leaderboard are unsurprisingly sent home after two dances, including one unlearned dance and a dance relay to songs from the 1990s.

AceShowbiz -“Dancing with the Stars” returned with a new episode on Monday, November 7. Picking up “90s Night” as its theme, the episode was dedicated to Aaron Carter, who died on Saturday, November 5 and had competed in season 9.

Just like last week, there were two rounds of competition. The first was the usual collection of new dances in previously unlearned dance styles. The next part was relay dance round where two celebs went head-to-head in the same dance style.

Trevor Donovan and Emma Slater were the first pair to dance that night. They performed a Salsa to “Barbie Girl” by Aqua. Len Goodman though it was “so much fun.” Derek Hough saw a few awkward moments, but praised the actor’s confidence. Bruno Tonioli dubbed it “plastic fabulous” and compared it to watching a sitcom set to music, while Carrie Ann Inaba said Trevor nailed the Barbie part but he was skippy during the dance. He earned 34 out of 40 points.

Shangela and Gleb Savchenko followed it up with a Samba to “Spice Up Your Life” by Spice Girls. Derek noted the footwork was sloppy in place, but thought that it was still well done. Bruno said Shangela erupted on stage, though she needed more control in her steps. Carrie Ann gushed, “That was lit!” while Len agreed with Derek about the footwork. She got 37 out of 40.

Wayne Brady and Witney Carson danced a Salsa to “Motownphilly” by Boyz II Men. Bruno said it had extra touch that Wayne brings to everything. Carrie Ann thought it was his best dance so far. Len loved the “armography” and that it was full of energy. Derek noted that it was a difficult routine, but he nailed it. The comedian earned the first perfect score of the night.

Up next were Daniel Durant and Britt Stewart who danced a Jazz to “Enjoy the Silence” by Depeche Mode. Carrie Ann said it was educational but also profound and so funky. Len exclaimed, “You never fail to amaze me,” Derek said it was insanely powerful and Bruno commented, “The world is proud of you. We felt the sound of silence, and we were all mesmerized.” The actor earned 39 points.

Heidi D’Amelio and Artem Chigvintsev were the next pair to perform, dancing a Contemporary to “Ironic” by Alanis Morissette. Len thought the dance didn’t match Heidi’s extroverted personality, but Derek could feel the emotion. Bruno said it could have been more fluid, while Carrie Ann was happy there were moments of beauty because Heidi was letting go. She earned 35 points.

Dancing a Samba to “Livin’ La Vida Loca” by Ricky Martin were Gabby Windey and Valentin Chmerkovskiy, who was absent last week due to COVID. The judges were full of praise as Derek dubbed it the best Samba ever. Bruno felt like he has been hit by a sex bomb. Carrie Ann thought the former “The Bachelorette” star has become an incredibly well oiled machine, while Len dubbed the dance a mix of flair and care. Unsurprisingly, she got a perfect score.

Vinny Guadagnino and Koko Iwasaki danced a Tango to “What Is Love” by Haddaway. Bruno noticed Vinny’s efforts, but it was still too skippy for a Tango. Carrie Ann praised Koko for the choreography and loved Vinny’s personality in the dance. Len appreciated seeing a lot of Vinny in hold, while Derek praised his charisma even though it was a little too steppy. The “Jersey Shore” star earned 29 points.

Charli D’Amelio and Mark Ballas also danced a Tango to “Song 2” by Blur. Carrie Ann likened Charli to Picasso’s painting. Len thought it was sharp, clean and crisp with great changes of speed and maturity. Derek loved the perfect ending and Bruno said it was like watching two prowling panthers in a good way. She got a perfect score.

For the second round, Shangela & Gleb and Daniel & Britt danced a Cha Cha as Vanilla Ice performs “Ice Ice Baby”. Len awarded his five bonus points to Shangela & Gleb as it was more crisp and showed more rhythm.

Vinny & Koko were up against Trevor & Emma as they danced a Samba to En Vogue’s rendition of “My Lovin’ (You’re Never Gonna Get It)”. Carrie Ann said Vinny had authentic bounce action, but Trevor had finesse. She awarded the extra points to Trevor & Emma.

Heidi & Artem and Wayne & Witney battled it out by dancing a Samba to Salt-N-Pepa’s performance of “Shoop”. Bruno said both pairs brought the party mood and were both sexy, but Wayne got the extra five points added to his perfect score earlier that night.

Charli & Mark and Gabby & Val danced a Salsa relay to “Ain’t Gonna Hurt Nobody” by Kid ‘n Play. Derek was torn, but eventually awarded the extra points to Charli & Mark.

After the votes were counted, Trevor & Emma, Vinny & Koko and Heidi & Artem were unveiled to be the bottom three couples. Heidi and Artem were the first couple sent home in the double elimination that night. Vinny & Koko, who were at the bottom of the leaderboard after two dances that night, were also eliminated.