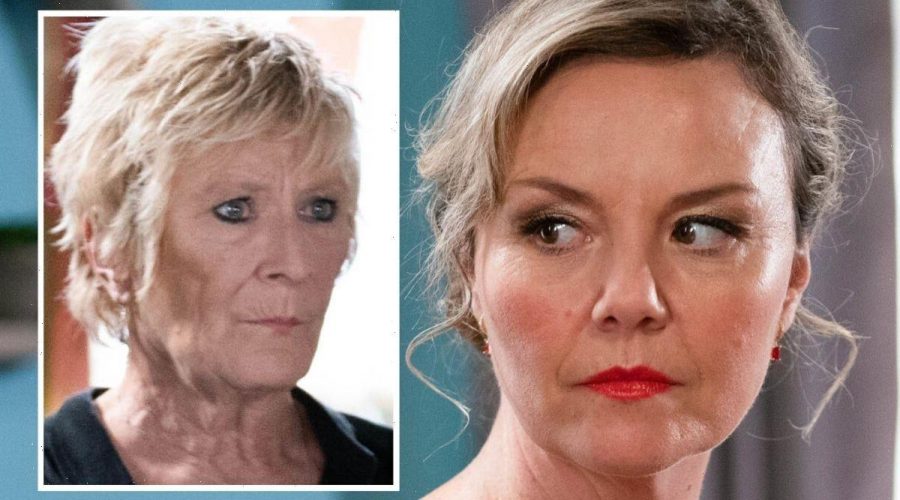 EastEnders couple Mick (played by Danny Dyer) and Janine (Charlie Brookes) were happily in love, getting married and expecting their baby together. However, things took a turn when Linda Carter (Kellie Bright) returned to Walford and Mick began to rethink his future. Official spoilers reveal that Shirley Carter (Linda Henry) is onto Janine and is adamant to bring her down.

In upcoming scenes, it’s Christmas morning and Shirley’s determined to expose Janine for who she is but she hasn’t quite pieced the full puzzle together.

With Linda by her side, they head to The Vic and, as they are making peace with Mick, Janine sees Jada Lennox (Kelsey Calladine-Smith) arrive and is determined to keep her away from Linda.

Both Linda and Shirley are stunned when Janine invites them to Christmas lunch, but there’s a bigger shock ahead.

Jada has returned for Christmas after being invited by Sharon and she drops a bombshell on her, Martin Fowler (James Bye), and Zack Hudson (James Farrar).

At the Christmas dinner table, Shirley doesn’t give up trying to expose Janine and it doesn’t take long before a vicious row ensues, but as Janine continues to shrug off all of Shirley’s accusations, Scarlett Butcher (Tabitha Byron) walks in.

However, will she finally tell the truth about her mother?

Secret and lies are finally exposed and all hell breaks loose in The Vic, with Mick’s world imploding around him and forcing him to face the harsh reality of his life.

Mick has the big decision as to whether he wants to fight for his love with Linda, and come to terms with who Janine really is.

One thing is certain: Mick’s last day in Walford will be on Christmas Day, with the fallout of what happened hitting home, but will the truth come out?

The residents of Walford wake up to the confusing news that The Vic isn’t opening and the news continues to spread about what has happened leaving everyone stunned.

The news about what happened is out and is the conversation of the Square but poor Scarlett gets a rough deal when she is the target of someone’s rage.

With the events of Christmas day still haunting those in the Square, Shirley realises that she has made a mistake and goes to make things right with Scarlett.

An EastEnders insider told Metro.co.uk: ‘Bosses are staying tight-lipped about the exact nature of Danny’s exit but there’s no way his character would go out without a bang.

“Exact details are being kept top secret but the show is pulling out all the stops to make it an explosive ending, which will no doubt leave the residents of Walford reeling.”

Touching on his exit from the series, Danny explained: “The big news is I’ve decided not to renew my contract.

“That’s all. That’s not because I’ve fallen out with anybody, I love everybody. That job has been amazing for me. It’s an important part of television.

“I’m grateful for the beautiful years I’ve had there. I’m going to miss the people massively. It’s me taking a risk.

“I’m 44 now, and I’ve had nine years of playing Mick and I think he needs to be rested. I’m still looking for that defining role.

“Maybe it is there, maybe it isn’t. But I’ve always been quite ambitious and I had quite a long career before I went into EastEnders.

“I know the landscape has changed slightly but I want to go out there and have another go, and the only way I can do that is if I decide to walk away from the job.”

EastEnders airs weekdays from 7:30pm on BBC One.