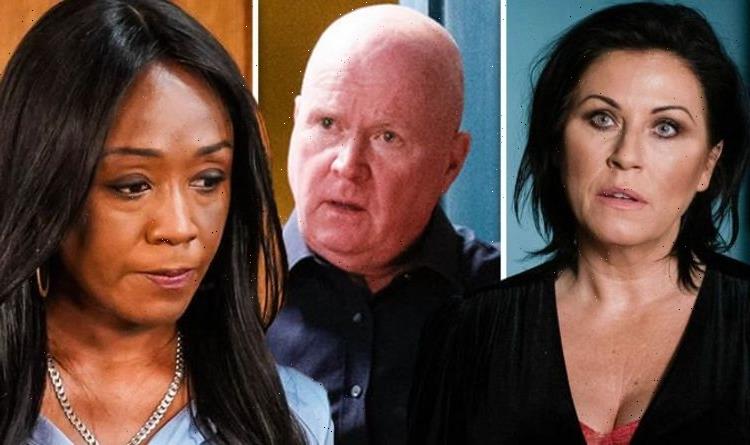 EastEnders: Maisie Smith on her exit and possible return

Phil Mitchell (played by Steve McFadden) has been complicit in several suspicious deaths over the years in EastEnders and a host of Walford residents have attempted to get revenge on the dodgy dealer for his sinister behaviour. However, on Christmas Day, Phil’s luck may finally run out as Denise Fox (Diane Parish) turns against the father of her son.

In upcoming scenes, Phil is frustrated when Denise tells him he can’t see Raymond until after New Year.

The co-parents have had a rocky relationship ever since Phil orchestrated his son’s return to Walford.

Denise was adamant the Mitchell hard man wouldn’t have access to his son but in recent months she’s softened to the idea of Phil having a role in Raymond’s life.

However, over the festive season, it becomes clear Denise regrets letting her son spend time with Phil.

Later, Denise changes her mind about restricting Phil and Raymond’s time together.

The dodgy dealer is thrilled to be spending time with his son.

However, the situation takes a turn for the worst when Phil is out of ear shot of Kat and Raymond.

Will Kat learn something from the young boy that puts Phil in danger?

Before the Slater matriarch has time to process the news, Sharon Mitchell (Letitia Dean) interrupts and invites them to the Albert later.

It’s not long before she realises Kat is hiding something and demands she tell her the truth.

Phil realises he has to act fast when he overhears his ex-wife and girlfriend talking.

He storms over to Denise’s house and confronts the mother of his son.

She has a stark warning for the dodgy dealer but he refuses to give in.

Kat’s frustrated when she notices Sharon knows Phil is up to something.

After the confrontation, Denise fears Phil will retaliate but how far will she be prepared to go to protect her family?

Denise knows only too well how dangerous Phil can be and was left heartbroken when she discovered he knew about Vincent Hubbard’s (Richard Blackwood) death.

The bride-to-be decided to keep the truth from her sister Kim Fox (Tameka Empson) and the revelation of how Vincent died has led to the breakdown of their sisterly bond.

Get the latest three-day weather forecast where you live. Find out by adding your postcode or visit InYourArea

If Denise plans to keep Raymond from Phil, will she decide the only way to keep her son safe is to kill his father?

The grieving mother had been relying on Phil to help her find Dennis Rickman’s (Bleu Landau) daughter but will she grow tired with him if the search continues to fail?

Phil is no stranger to upsetting his former lovers and has been shot twice, once by Lisa Fowler (Lucy Benjamin) in 2001 and again by Shirley Carter (Linda Henry) in 2014.

Will Denise, Sharon or Kat decide they’ve had enough of Phil’s antics and kill him?

EastEnders airs on BBC One on Mondays, Tuesdays, Thursdays and Fridays.

22/12/2021 TV & Movies Comments Off on EastEnders horror as Phil Mitchell shot on Christmas Day but whos to blame?
Lifestyle