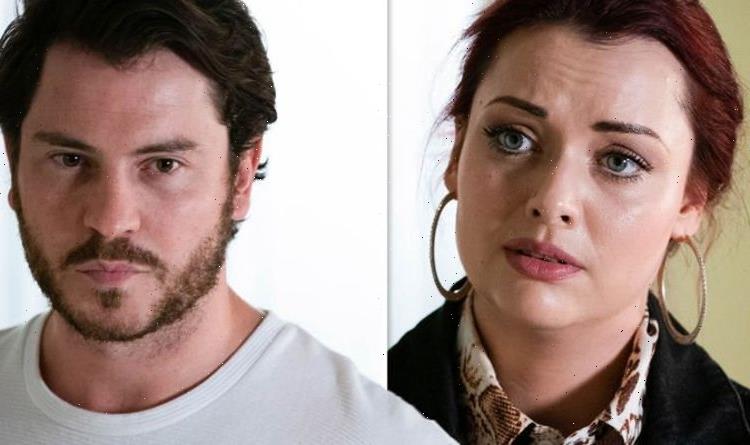 Whitney Dean (played by Shona McGarty) was heartbroken when fiancé Kush Kazemi (Davood Ghadami) was killed in a supposed freak accident in EastEnders. However, unbeknown to the budding singer Gray Atkins (Toby-Alexander Smith) murdered the market trader and those closest to Whitney could be in danger if they embark on a romance.

In upcoming scenes, Whitney tries to get her singing career back on track after Rocky Cant’s (Brian Conley) actions kicked her out of Jen’s (Kate Robbins) competition.

The market trader appeals to Jen but she’s crushed when she’s told she blew her chance.

After almost kissing, Whitney tries to avoid Gray but is taken aback when he invites her to dinner.

She rejects his offer and admits she still thinks about Kush all the time.

Gray secretly poses as Whitney’s manager and tries to persuade Jen to put Whitney on the line-up for her entertainment industry showcase.

Jen doesn’t commit to an answer but Whitney’s thrilled when she receives a call from the manager later on.

She agrees to let Whitney feature in her showcase and the market trader realises Gray was behind the change of heart.

The disgraced lawyer convinces Whitney to give their romance a go.

She agrees but makes it clear she wants them to take things slow.

Gray supports her at rehearsals but the situation becomes awkward when Chelsea Fox (Zaraah Abrahams) appears behind the bar.

Jen offers Whitney the chance to perform on a cruise ship but Gray’s alarmed by the offer.

Fearing he’ll lose her, Gray tries to talk Whitney out of taking the opportunity.

EastEnders spoilers confirm Gray takes matters into his own hands but what is he planning?

Gray left Chantelle to die when she announced she was leaving him before going on to murder Tina Carter (Luisa Bradshaw-White) after she’d figured out what he’d done.

Will the lawyer lash out after realising he can’t stop Whitney from leaving?

Gray may blame Jen for Whitney leaving him and take out his anger on her.

The lawyer killed Kush when he discovered he was going on the run with Whitney and his son.

Will history repeat itself as Gray confronts the music manager for giving the budding singer an opportunity she can’t turn down?

Meanwhile, EastEnders fans are fearful for Whitney as @tmilats tweeted: “Please I really don’t want Whitney with Gray I have a feeling she’s going to be the one to unravel everything about him #EastEnders.”

@Ben4eva added: “Yes Whitney it’s Ok to move on but definitely not to Gray stay as far away from him as possible #EastEnders.”

EastEnders airs on BBC One on Mondays, Tuesdays, Thursdays and Fridays.

23/09/2021 TV & Movies Comments Off on EastEnders murderer Gray Atkins next victim unveiled and its not Whitney Dean?
Lifestyle