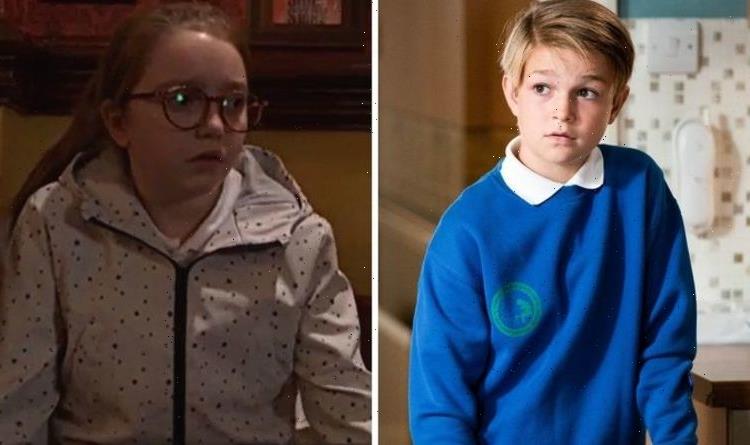 EastEnders: Janine is turned down for job by Suki

Tommy (played by Sonny Kendall) confided in his nan Jean Slater (Gillian Wright) about his concerns regarding his real father, EastEnders villain Michael Moon (Steve John Shepherd). He and half-sister Scarlett (Tabitha Byron) have been getting increasingly fed up with their families and the secrets they have been discovering. Seeing no other way out, the schoolchildren could decide to run away from home, leaving their families terrified about what might have happened to them.

Tensions between Kat Slater (Jessie Wallace) and Janine Butcher (Charlie Brooks) came to a head in Tuesday’s instalment of the BBC soap.

Noticing Tommy’s quiet mood, Jean told him: “You can tell me, I’m your nan, it’s what I’m here for.

“Is it football, family or school?” she asked as the aspiring footballer replied: “Family.”

“So you’ve been thinking about what your mum has told you about your dad?” the Albert Square cleaner assumed.

“More like what she’s not told me,” Tommy answered before he asked Jean what she knew about his real dad, Michael.

Jean spoke to Kat about Tommy’s worries, and when she spoke to her son she was furious to discover that Janine had told the 10-year-old the truth about what Michael was like.

Tommy asked his mother: “Why didn’t you tell me Michael was a bad man?”

A furious Kat stormed over to The Vic to confront Janine, and the two ended up in a fight.

Watching on were the two youngsters, who were horrified to see their mums acting in such a way.

Tommy begged his mum to stop as Scarlett was speechless.

The fight also ruined Scarlett’s hope that Janine was beginning to show an interest in her.

She’d arranged for Scarlett to meet with a group of deaf people for a school project she’d been working on when the chaos ensued.

This was ruined by the confrontation though, which was seen by everyone in the pub.

“You told Tommy about Michael,” Kat screamed as Janine stood at the bar.

“Yeah, it’s about time he finds out what kind of a man his dad really was,” she replied.

Kat fumed: “You think you’ve done him a favour? Messing with his little head? He never needed to know.

“You could have ruined our family,” Kat added as Janine snapped: “Says the woman who slept with her husband’s disgusting cousin – fabulous genes.”

Kat then aimed a slap at Janine, who retaliated by lunging at her.

Both Scarlett and Tommy are fed up with the family situations and, being so close, they may decide to run off together.

The two might plan to run away from home in upcoming episodes, packing their bags and pretending to be going to school.

But anything could happen to the vulnerable children, and both Kat and Janine will be beside themselves when they find out the two have disappeared.

Will the mums put their differences aside to join forces in finding their children?

It wouldn’t be the first time the two have plotted something, with Tommy secretly keeping Scarlett in his room the last time she had run away from Janine.

They might manage to get far away from Walford and in search of the truth about their dad.

In the meantime, Kat, Janine and their families are likely to be frantically searching.

But could they find themselves in serious danger while out on the streets alone?

EastEnders continues on Thursday at 7.30pm on BBC One.

12/10/2021 TV & Movies Comments Off on EastEnders panic as Tommy Moon and Scarlett Butcher disappear – who took them?
Lifestyle