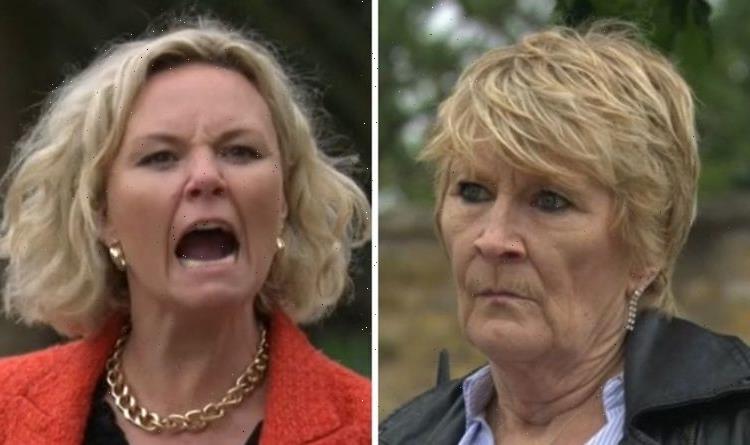 Shirley Carter (played by Linda Henry) could be in deep trouble after the fire that started at Phil Mitchell’s (Steve McFadden) house. After overhearing it was Shirley who hit Phil over the head, Janine Butcher (Charlie Brooks) confronted Shirley, asking why she wasn’t already in jail. But could it possibly hint at a larger plan ahead for Janine? A number of fans think so.

At the beginning of the episode, Mick Carter (Danny Dyer) found his mother Shirley in the park, asking: “Be straight with me I’m only going to ask you this once, did you start the fire?”

Upset that he would even ask, Shirley snapped back: “I am sick of him making a mug out of me I went round there to ask him to help me get Tina back.

“He wouldn’t, so I hit him, but that’s all I did, I swear! I must have knocked something over,” Shirley added, clearly distressed.

Feeling guilty about what happened, Shirley replied: “It’s not alright, Mick, there were two kids in there.”

Later that day, Janine overheard Phil talking to Callum Highway (Tony Clay), telling him a detective wanted to speak to him about who hit him over the head.

Reluctantly, Phil revealed it was Shirley who hit him, leaving Janine to walk out of the café and confront her.

Spotting Shirley looking over at the aftermath of the fire, Janine shouted: “Admiring your handiwork? Why aren’t you locked up yet?”

Quietly, Shirley said: “I don’t want any trouble,” but this only instilled more anger in Janine and started a confrontation between the two.

“No? Well, I don’t want vicious old grannies setting fire to peoples houses, but then we don’t always get what we want, do we, Shirley?” Janine snidely remarked.

Janine then turned round to the square and shouted: “Do you all know it was Shirley that started the fire? Almost killed my daughter and Kat’s son!”

Not wanting to listen to Janine’s accusations, Shirley starts to walk off but not before Janine yelled: “Yeah, that’s it! Walk off, Coward!”

The question is whether Janine will attempt to have Shirley thrown in prison to cover her own tracks.

Will Janine be responsible for Shirley being sent to prison?

Viewers of the show took to Twitter to theorise and discuss what they thought of the showdown between Shirley and Janine.

Monty wrote: “Not going to lie, looks like Janine is out for blood and will want someone else to pay for what happened to her daughter.”

While Claire wrote: “If Janine sends Shirley to jail, I’ll be fuming! Never liked Janine and think she purposefully set the house on fire.”

However, Cin Da Goat wrote: “Janine has only been back for 5 minutes, and it already carrying the show #EastEnders.”

Also, on Tuesday night’s episode, in the aftermath of the showdown between Phil and Shirley, Janine confronted Scarlett (Tabitha Byron) and Tommy Moon (Sonny Kendall), and she unknowingly caused the fire by throwing her daughter’s jumper on the hob.

After rescuing Tommy from the fire she was branded a “hero” by her nearest and dearest and attempted to use her newfound status as a pillar of the community with Kat Slater (Jessie Wallace), hoping to convince her to let her have custody of Scarlett.

While grateful for Janine’s actions during the blaze, Kat refused to budge and arrived at court, where she was ultimately granted custody.