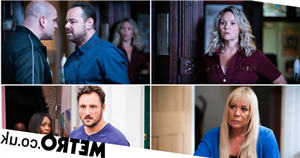 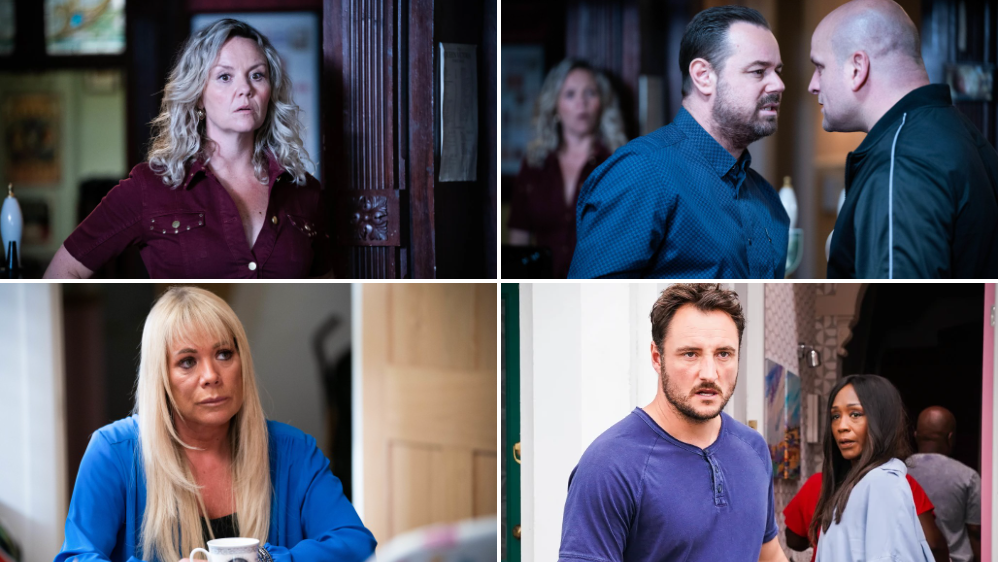 Stuart Highway’s (Ricky Champ) state of mind continues to spiral and, as he takes drastic action in EastEnders, fears grow.

A situation gets out of hand, and it leads to Stuart making a huge decision about his future.

Meanwhile, Janine Butcher (Charlie Brooks) has every reason to be unnerved as Linda Carter (Kellie Bright) edges closer to the truth of the crash.

Is Janine’s crime about to be exposed?

An anxious Stuart snaps and disposes of his anti-depressants prescription. Outside of his NA meeting, Linda intervenes when she spots him near a drug dealer and the situation between them gets heated.

Growing desperate, Stuart purchases some drugs, but later hands them to Jada. He seeks out Linda to apologise but is met with a frosty response from Mick. Unable to get an appointment at the GP, a riled up Stuart takes drastic action.

Linda shares the date for her upcoming court hearing with a supportive Mick and expresses her concerns over the outcome.

Later, a distraught Linda enters The Vic following the argument with Stuart and Mick comes to her aid, much to the disappointment of Janine. Linda gets emotional about the prospect of being separated from Annie after she takes her first steps in front of her and Mick. They almost kiss but are interrupted by Jada.

Billy grows jealous as he observes Finlay and Honey together at the Minute Mart. Sonia spots Kim avoiding Honey and confronts her, insisting that she pays Honey the money she is owed from their bet. Honey later confesses to Kim that she lost the bet as she said no to a date with Finlay, which pleases Billy.

Lily, Nugget, Denzel and Amy plan a cinema trip and Lily is put out by Amy and Denzel’s flirting. Later, at Denise’s birthday, Stuart’s bag of drugs falls from Jada’s purse and Lily steals the pills after they’re confiscated by Denise.

Desperate to impress Denzel, Amy takes half a pill. Denise soon realises the drugs are missing and heads in search of the group with Jack. They come across Amy just as she collapses, and immediately call an ambulance.

At the GP surgery, Bernie does all she can to help a frantic Stuart as the situation escalates. She apologises to him for not realising he was living with PND and for helping Rainie leave the Square. Convinced he has been misdiagnosed, Stuart grows desperate.

Paramedics attend to Amy while Jack and Denise watch on in despair. Martin pushes Lily to find out how Amy got her hands on the drugs. Back at his stall, he waits anxiously for news on Amy alongside Billy, who is getting frustrated with the level of noise coming from Felix and Finlay’s stall.

Mr Lister attempts to shut down Felix and Finlay’s stall and Billy comes to their aid. Later, Martin is adamant that Denzel supplied Lily with the drugs, and confronts Howie.

At The Vic, Janine flirts with Mick who is distracted with thoughts of Linda. Trying to offer his support, he asks Linda to go over the exact events of the accident and encourages her to check her call log online. Mick and Linda soon discover that Linda made a call to The Vic that night, panicking Janine.

Stuart continues to battle with his health, leaning on those around him for support in order to finally confront his diagnosis.

Convinced she is going to prison, Linda writes birthday cards for the future for her children. Sharon reveals that she was at The Vic on the day of the accident and knows who answered Linda’s call. At The Vic, Linda confronts Janine about the call in front of Mick.

Martin warns Lily to stay away from Denzel and Nugget as he no longer trusts her. When Martin overhears Lily confess to Eve, he takes her to the salon to apologise to Howie, where Lily reveals the source of the drugs.

Martin, Howie and Linda put pressure on Jada to share where she got the drugs. Later, Lily delivers a well-deserved apology to Denzel. Denzel and Lily visit Amy together in the hospital.

At the market, Billy and Whitney try to teach Finlay some useful seller’s ‘lingo’ At The Vic, Finlay lets Billy know that he has cottoned onto his affection for Honey.

Linda decides to make the most of the time she has and suggests a Carnival party at The Vic, which Mick loves. Mick encourages Ollie to have a sleepover at Linda’s, for which she is grateful.

Stuart makes some big decisions about his future as his health situation comes to a head.

Elsewhere, Jack brings Amy back from the hospital and keeps her apart from Denzel. When cautioning the kids about drugs, Jack asks Amy to keep her distance from Denzel and Nugget going forward.

Admiring Finlay’s charm and confidence at the stall, Billy confides in him that Honey is the only woman for him and Finlay wonders what he can do to help.