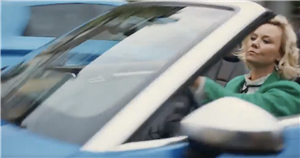 Charlie Brooks has been seen as Janine Butcher for the first time since reprising the role in a new trailer for EastEnders.

The 40 year old is returning to Albert Square as the murderous character after seven years away, having left the BBC soap for a second time in 2014.

A number of the show's much-loved characters are seen going about their days in Walford as Tameka Empson, who plays Kim Fox, is heard speaking about the community.

She says: "They say that when the going gets tough, the tough get going," as the likes of Kat Slater (Jessie Wallace), Karen Taylor (Lorraine Stanley) and Suki and Kheerat Panesar (Balvinder Sopal and Jaz Deol) get to work.

Tameka continues: "Course we do, we look out for each other, we stick together," as Sonia Fowler (Natalie Cassidy) and her dad Terry 'Rocky' Cant (Brian Conley) are seen enjoying a spot of breakfast.

"At the end of the day, this community, it's a part of us. We're like one big noisy family," the narration continues as Jean Slater (Gillian Wright), Martin Fowler (James Bye), and on-screen brothers Stuart 'Halfwit' and Callum 'Halfway' Highway (Ricky Champ and Tony Clay) appear.

"It's given us our jobs, our mates, and not forgetting the best boozer in the whole world!," Tameka carries on as Mick Carter (Danny Dyer) slides a drink down the bar to daughter Frankie Lewis (Rose Ayling-Ellis).

She says: "I'm telling ya, this Square is where we all belong, as Honey Mitchell (Emma Barton) is nearly hit by Janine, who speeds past her in a blue car.

The trailer then ends with a blonde figure, dressed in a green coat and black trousers knocking at a front door.

As the front door slowly opens, we see Charlie in character as Janine looking up and giving a crooking smile.

EastEnders teased: "Summer may be ending, but everything in Walford is just heating up," as they shared the video with their 2.4million Instagram followers.

Fans went wild for their first look at Janine, with one writing: "Loving this trailer…I'm also looking forward to Janine's return in the Autumn along with Daughter Scarlet as well."

A second added: "A Proper old school favourite of mine and the only female character i like."

As a third wrote: "I'm far too excited about Janine's return."

EastEnders airs Monday and Friday at 8pm and Tuesday and Thursday at 7:30pm on BBC One.

For the latest updates from Albert Square, sign up to OK!'s daily newsletter.