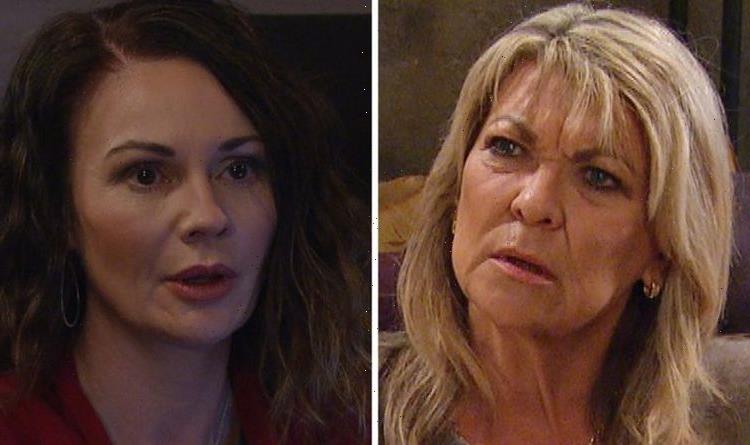 Viewers will remember Paddy Dingle (played by Dominic Brunt) got himself into a sticky situation recently with Kim Tate (Claire King) after falling into doping her racehorses. After wife Chas Dingle (Lucy Pargeter) found out, she set out on a mission to bring down Kim from her throne and expose her for cheating within the races. However, on Monday night’s episode of the ITV soap, she and Paddy stole Kim’s horse but will Chas be the one to go down for the crime?

In tonight’s episode, Marlon Dingle (Mark Charnock) walked up to the Woolpack, which he co-owns with Chas, to see her and Paddy leaving.

She said to him: “Marlon, you’re opening up, it’s alright Al’s will be in.” However, he wasn’t happy with being left on his own with Al Chapman (Michael Wildman).

Walking to the car, Paddy whispered: “Chas, I thought we were taking on Kim?” to which she agreed that is what they were doing.

Still feeling confused, Paddy asked: “By going to the races like she wants us to and sticking her stallion full of drugs?”

Chas clarified: “No, by finally getting her on the record as a cheating bullying evil cow that she is.”

Later whilst waiting for the horse to turn up, Paddy wondered whether the previous horse he had doped was okay, but an irritated Chas snapped back: “I don’t care, Paddy.

“Focus right, this is going to work, how many more times Paddy? All we have to do is get Kim here.”

Thinking about what could go wrong with Chas’ plan, Paddy said: “Yeah, but you say that like she’s stupid enough to just turn up.”

Having enough of her husband’s negativity, Chas laid down the plan one more time: “When it comes to money, everyone is stupid.

“If her horse doesn’t win today, then she stands to lose a pile of cash, right? Right, well, go and tell her that you’re not doing it.

“Make her so mad that she has to come here herself and force you to stick that needle in that horse, that’s when we get her on record.

“Admitting the whole kit and kaboodle of cheating or enough to get your foot out from underneath her spikey heel,” she told Paddy.

DON’T MISS…
Dan Walker walks off Strictly after apologising for ‘crossing a line’ [WATCH]
Katya Jones hits out as Adam Peaty in tears over Strictly exit [LATEST]
Emmerdale twist as Andrea Tate brings down Meena in return from death? [INSIGHT]

Confidently, Paddy walked over to the man who had brought Brandy to be doped and told him he wouldn’t be sticking a needle in the horse until Kim came down and spoke with him.

After trying Kim a couple of times, she finally messaged the man and told him the race was off and to return the horse to its stables.

She had decided that day to stay home and miss the race, to take care of her grandson Thomas Tate, who Gabby Thomas (Rosie Bentham) had just given birth to.

Walking back to his wife in shame, Paddy apologised, but Chas had another plan up her sleeve: “Don’t be, I’ve got a better idea.

“Brandy is the only living thing that Kim has left that she cares about that she would do anything to protect, giddy up Paddy, follow that horse.”

At the end of the episode, Chas and Paddy were seen standing in a field with Paddy pacing anxiously: “What did we do, what did we do?! We’ve got bigger problems.”

Turning to the stable, Chas said: “Who? Him? Ha-ha, Brandy is not our problem, Paddy he is our solution.”

Looking at his wife, Paddy said: “Chas? We’ve horse-napped her horse,” but his other half didn’t see the negative in what they had done.

“Yes, we have, and this fine stallion is going to make Kim give us everything that we want,” she added but Paddy clouded her positivity and said: “Yes, unless, you know, she doesn’t?”

Could Chas and Paddy stealing Kim’s horse get them in more trouble than they are already in?

Will Chas be arrested for her actions, leaving Paddy to try and clean up their mess?