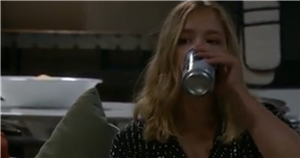 Emmerdale fans have shared their concerns for Liv Flaherty after the Yorkshire lass tried to seduce her close friend Jacob during Wednesday night’s episode of the ITV soap.

But it all came to a head during the show’s latest instalment as Liv, played by Isobel Steele, tried to make a pass at one of her closest friends after Mandy Dingle made a negative comment about her asexuality on Tuesday.

Mandy, portrayed by Lisa Riley, was desperate to make sure her son Vinny doesn’t restart his relationship with Liv again and sealed the deal when she warned her not to let it happen again.

After she reflected on her relationship with Vinny, Liv was seen throwing back a bottle of vodka before she made a pass on Jacob.

Shocked by her proposal, Jacob quickly informed Liv that he wasn’t interested in hooking up with her as she stared to take off her clothes.

It was at this point that her older brother Aaron walked in on the two and immediately started shouting at her after he realised what was happening.

Jacob managed to excuse himself before all hell broke loose after Liv revealed she had stolen one of her brother’s condoms without him knowing.

But it was Liv who ultimately had the last word after she said some hurtful comments about Aaron’s relationship with Robert Sugden before he threw her out of the house.

After watching the explosive episode, Emmerdale fans took to Twitter to share their concerns for Liv’s future and debate whether or not Aaron did the right thing.

One user wrote: “Yes Liv’s got her fair share of problems but to be fair who doesn’t? What happened to Dingle’s always being there for each other, no matter what?”

While one user penned: “I really hope Aaron won’t be made out to be in the wrong or blamed for whatever is apparently going to happen to Liv. He’s really tried his best for her only to get it thrown back into his face repeatedly.”

“Aaron needed to do something … liv doesn’t care wot she says or does & is hurting Aaron wiv wot she says … @DannyBMiller & @Isobel_steele are amazing but we need to c their brother/sister relationship back on track x."