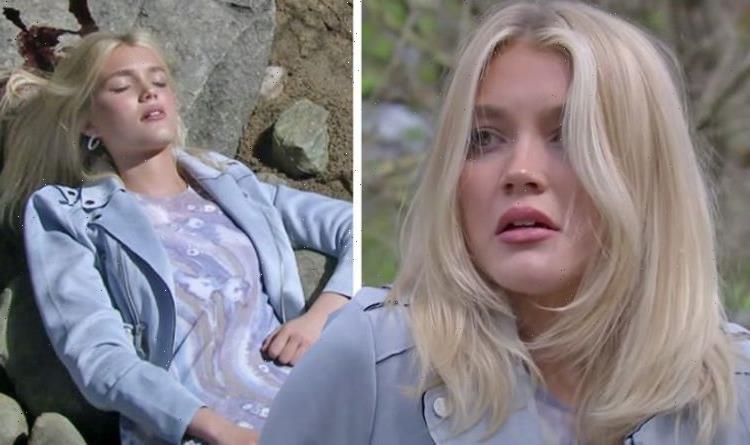 Last night, Meena Jutla (played by Paige Sandhu) claimed her first victim; Leanna Cavanagh (Mimi Slinger). Emmerdale viewers saw a showdown occur on the bridge, but many wondered why Leanna didn’t take a more direct path back to the village, and even call out for help along the way. Should she have done this, there is a chance an ambulance could’ve been rung and she may not have died.

“Babe, shall I look at that for you? I’m a nurse, it’s no trouble,” Meena said in reference to Leanna’s sprained ankle.

“Look, you can have it back, I’ll forget everything,” Leanna replied throwing it onto the floor in front of them.

“Forget what?” Meena teased moving closer to her and “Nadine” was mentioned.

“What about her?” Fans saw Meena press and Leanna shouted back: “The foulplay, it was you!”

“She was my best friend,” the nurse whispered but Leanna didn’t hold back: “And you killed her.”

“Okay yes, I lied,” Meena said and slammed Leanna onto the wall.

Leanna tried to fight back but Meena rolled her off the wall and she fell onto the dried up riverbed below, hitting her head on the rocks.

Emmerdale fans were quick to suggest Leanna should’ve taken a more direct route back to the village and on the way, call out for help.

Taking to Twitter, one said: “What a load of rubbish, as if you’d leave the house and instead of running to where everyone is in the village, you go to the cemetery then a country road and stop on a bridge.”

“Bloody stupid, she would have run to a public place! Here we go again, no shouting. Another long drawn out story!” Another wrote.

A third added: “Laughable this. Leanna got no phone to call for help? Couldn’t have gone to pub where people are? Only option was to run to a secluded graveyard? Utter tosh!”

It comes after other fans suggested Meena’s DNA would be all over Leanna’s body.

Meena cupped her face and then grabbed Leanna’s jacket, while Leanna pulled Meena’s hair – will there be DNA under Leanna’s nails?

To add to this, Meena then noticed Leanna was still breathing and went down to the river to check.

“Oh dear, should I call for an ambulance? I’m not sure they’ll get here in time,” Meena said.

“Such a tragic accident, you tripping and falling like that. But then again that’s what you get for running off in killer heels,” she continued as Leanna struggled for breath.

The teenager’s body finally gave up and Meena commented: “Bless. But I was right not to bother the emergency services, nothing they could do.”

Before leaving, Meena spotted the ring Jacob Gallagher (Joe-Warren Plant) had given Leanna, sparkling on her finger in the sunlight.

Meena picked up the deceased’s hand and took it off, placing the diamond onto her own finger.

The actress who played Leanna spoke out about leaving the soap.

“I am glad that the secret is out – I knew back in December that Leanna would meet an untimely death but I wasn’t told any other details until just before the scripts were published,” Mimi explained.

“It has been hard not to let on to anyone. I am sad to be leaving the Emmerdale family on one hand but so excited by what may be in store in the future – I am so excited by the storyline and the opportunity that I have been given to bring some drama to the Dales.

“It has been so difficult to keep the secret – of my decision to leave Emmerdale to pursue other opportunities, but also the secret of my demise.

“I am quite good at keeping secrets generally but this has been particularly tricky because so many people do ask me frequently about my plans for the future,” she added.

“I have absolutely loved playing Leanna. I can’t believe it’s been 3 and a half years – it has flown by!  I have had the most amazing experiences and have learnt so much from some incredibly talented actors, directors and producers.”

As for what it was like to film such intense scenes, Mimi added: “I really enjoyed filming the scenes – those with my on-screen father, Jonny, were incredibly emotional.

“There were lots of tears but I actually enjoyed having the opportunity to challenge myself.

“The scenes with Meena, played by Paige were emotional and dramatic at the same time. Paige is great at playing a bit of a psycho – it was actually quite scary!”

Emmerdale is available to watch on the ITV hub now.