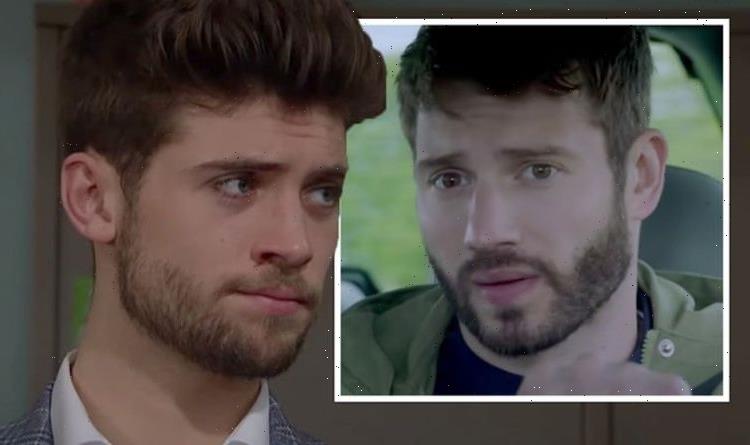 As far as the Emmerdale villagers are concerned, Jamie Tate (played by Alexander Lincoln) perished when his car crashed into a lake and police have been unable to retrieve his body. Kim (Claire King) is certain her beloved son is alive and even told his daughter Millie he was “comfortable” and had sent her flowers to show he’s well. However, a tiny detail on the card sent to Kim suggest something more sinister is at play and hints at a return for Joe Tate (Ned Porteous).

Kim continued to try and prove her son was alive as she demanded Dawn Taylor (Olivia Bromley) go to Home Farm and explain her plan to run away with Jamie detail by detail.

Dawn explained she didn’t plan to leave the village with Jamie but Kim wasn’t buying her story.

She insisted Jamie was alive and well with Dawn simply waiting for the right time to slip away and join him.

As Kim refused to listen to those around her telling her Jamie was in fact dead, it seems his disappearance may be part of a bigger storyline.

In Thursday’s double bill, Kim received flowers and a card simply signed off with “J x”.

“It’s from Jamie. It’s him, he sent those flowers,” Kim insisted.

“That’s how we sign off. One initial and a kiss.”

Kim added only Jamie and her late husband knew about the tradition but Will (Dean Andrews) wasn’t convinced.

The Home Farm owner later remarked it could be a joke from Joe as he hates her “just like his father”.

The flowers may be from Joe but are they a sign he was involved in Jamie’s “death” and is mocking Kim for not realising he was behind it all.

Kim previously tried to have Joe killed and the businessman has not been seen since it was confirmed he was hiding out in Monte Carlo.

Could Joe have been biding his time before connecting with Jamie and planning to take down Kim?

Jamie has been set on getting revenge on Kim for meddling in his life but he could have been double crossed by Joe.

The businessman may have convinced Jamie to go along with his plan to hurt Kim, only to kill him at the last hurdle.

Kim would be devastated if it was revealed Jamie was really dead and Joe was behind it all.

Official soap spoilers for next week’s episodes do not reference Jamie so fans will be kept on the edge of their seats regarding his future.

However, viewers were quick to take to Twitter to theorise what has happened to the controversial character.

“This October trailer for #Emmerdale looks epic. Who is going to be Meena’s 3rd victim? Is Joe Tate going to make a long awaited come back with Jamie by his side to take down Kim?” Rya Glendenning posted.

“Is Graham really dead? So many questions so many answers? I LOVE super soap month.”

Maria Chrys predicted: “Joe is coming back. He sent the flowers. But yes, Jamie is alive #Emmerdale.”