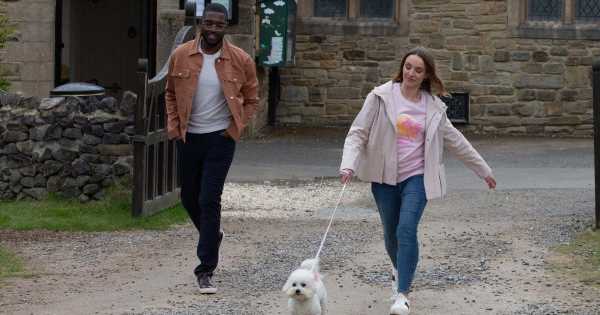 Though Andrea’s new dog Princess has only just been introduced to Emmerdale – a gift from dad Jamie to ‘lure’ his daughter Millie back to Home Farm – she could be in grave danger next week.

Emmerdale spoilers have revealed that a mystery dognapper has it in for the pooch, as they decide to trap her in a hot car.

Next week, Andrea invites Charles away to go camping with her and Millie.

But soon, Meena is doing her best to put Andrea off the idea, desperate to continue her scheme to get her sister Manpreet back together with the vicar.

Meanwhile, Gabby is left annoyed when Andrea simply breezes into Home Farm with her dog Princess, to retrieve Millie’s sleeping bag for the camping trip.

The dog soils Gabby’s handbag while inside the house, leaving her even more furious.

Meanwhile, Meena intercepts Charles outside the church after lying in wait for him to turn up, to sow some doubts into his mind about being with Andrea.

She insists that introducing another father figure so soon into Millie’s life could be confusing for the young child.

But as Noah cleans up Gabby’s handbag for her the next day, Gabby threatens that the dog is now on borrowed time.

Andrea leaves Princess securely tied up in the shade while she heads off to reason with Millie about the trip.

But while she’s distracted, someone is visible luring the dog out with her favourite toy, into Andrea’s parked car – and slamming the door shut.

As the sun. beams down mercilessly, Princess remains trapped in the boiling hot car, as she desperately scrambles to make her escape – but to no avail.

Soon, the camping trip is cancelled, and we finally learn who orchestrated the ghastly ordeal for the innocent pooch.

But who could it be?

It’s been a while since there has been a dog in Emmerdale, as the Dingles’ iconic pooch Alfie passed away in December 2017.

With Dingle patriarch Zak off the scene for the meantime, he’s presumably taken his own dog Monty with him, while Pollard’s pooch Cheryl hasn’t been seen for quite a while either.

And though Edna’s old dog Tootsie hasn’t been confirmed dead, she hasn’t made an appearance in the village for years.

But, with Princess’s life hanging in the balance, it’s unclear as to whether Emmerdale fans will get another permanent soap pooch for a while yet.