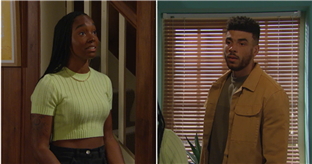 Tensions are high between Nate (Jurell Carter) and Naomi (Karene Peters) in a new Emmerdale spoiler video, as Nate reels from the discovery that Naomi was involved in Nicola’s (Nicola Wheeler) attack.

Following the incident in June that saw Nicola beaten up by a group of girls, she has been suffering with PTSD. After running into Naomi in the café and recognising her shoes, she contacted police and had her arrested.

Having spoken to Nicola, Nate has been led to believe that Naomi was one of the girls who attacked her, and, understandably, feels betrayed that he didn’t hear it from her first.

In the clip, he expresses his anger that ‘half the village knows’ but that he had to find out later, through Nicola.

Naomi apologises, admitting that she was scared of his judgement.

As Nate storms out, Ethan comes downstairs, asking what all the noise is about. As Naomi explains that Nicola has been telling everyone that she attacked her and that Nate doesn’t believe that she didn’t.

Ethan points out that with them both living in the same house, they need to sort things out between them. Naomi decides to try talking to him again once he has calmed down.

Will the pair be able to sort things out?