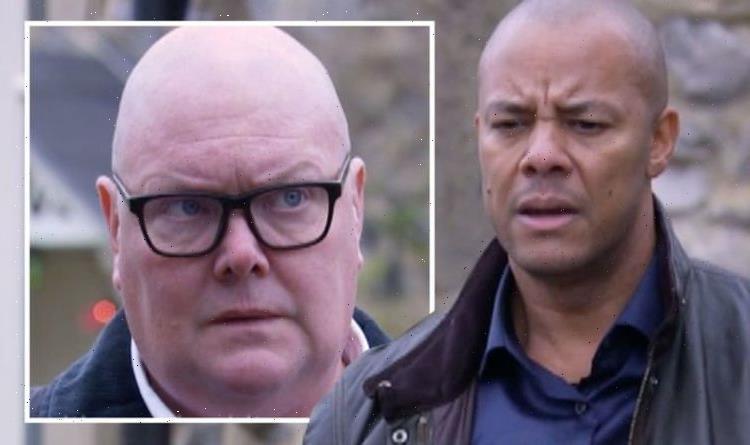 Emmerdale: Paddy and Belle clash over her future with Jamie

Paddy (played by Dominic Brunt) was left devastated at the beginning of the latest instalment of Emmerdale as he and his wife Chas Dingle (Lucy Pargeter) returned to the village from Scotland to find their home had been burned to the ground. They immediately thought Al (Michael Wildman) had caused the devastation as they knew he had plans to use the land to build a block of luxury apartments. However, when the stalwart of the ITV soap uncovered an unsettling death discovery, he seemed hellbent on making the ruthless businessman pay but will this lead to murder?

Viewers of the weeknight serial drama know Al did in fact cause the blaze when newcomer Gavin (Ben Richards) began making threats towards him if he didn’t get the deeds to the land.

The businessman was left with no other option than to take drastic action, which resulted in him putting a metal utensil in a microwave and leaving the gas hobs on.

He made sure he had an alibi, however, as he spent the day with Kerry Wyatt (Laura Norton) and she was willing to back him up.

Although he denied it, Paddy and Chas were sure as anything it was him and what was more devastating to them as they had lost their possessions in the fire.

This included the memory box of their daughter Grace, who died shortly after birth in 2018 as she was born without a bladder and kidneys.

Sat in the home which was once lived in by Aaron Dingle (Danny Miller), Paddy and Chas discussed their loss and it was clear the former was angry.

“I had a scan picture of Grace in my wallet and I cannot find it anywhere,” he said, to which his wife replied: “We put it in her memory box, remember?”

“Which also went up in flames,” the vet said with his head in his hands as the mother of his children said she was trying not to think about it.

“What are we going to do?” the father of two asked, adding: “That’s it, we have lost her forever.”

Trying to offer some reassure, Chas told her husband: “No, Paddy. I’m not having that. We need to concentrate on the insurance and how long we’re going to be homeless for and what we’ve really lost.”

We have lost her forever

“Because we will never lose Grace, she will always be in our hearts,” the landlady of the burnt-out pub told her other half.

“Al might have burnt down our home but he can never take our little girl away from us,” she continued, with Paddy accepting she was right.

Later in the episode, the couple were stood outside the Woolpack, speaking with the fire investigator about any updates they had.

Al stormed over as he wasn’t happy with the supposed lies they were spreading about him starting the explosion which left the pub as nothing but a shell.

The vet stepped in as he said they shouldn’t be having a row in front of the fire investigator as they could all get into trouble.

“Even if the insurance pays out, it’s going to cost hundreds of thousands to start up any kind of business again,” Al explained as he tried to make peace.

“You don’t have that kind of money but I do,” he added, telling the couple he wanted to buy them out of the establishment.

“I knew it. If that’s not an admission of guilt [I don’t know what is],” Chas declared as her husband stood with a scowl on his face.

“Chas, I am seriously trying to help you out here. It’s the only way you’re going to salvage a penny,” the businessman continued but Paddy still wasn’t impressed.

Although there are a lot of people who would want him dead, it could be the vet who takes him down just as he believes he’s going to build up his empire.

As he has expertise in medicine and medical procedures to a degree, Paddy might know the best solution to concoct to poison the businessman.

However, it would be subtle enough to ensure that if a toxicology report was carried out, the experts wouldn’t think any foul play had occurred.

They would rule it as a tragic accident and therefore, the stalwart of the soap would get away with the perfect murder.

During his time on the show, Paddy has never thought about murdering someone, although he has hated quite a few of his neighbours over the years.

It would be a first for the beloved character but the heartbreaking pain he would be feeling over Grace would be enough to justify killing Al in his head.

Although, this could be the beginning of a dark and murky chapter for the vet as he gets a thrill from killing those who have wronged him.

As he makes more enemies than friends in the village, his being of terror could truly begin as he takes deadly revenge.

He would become more like a Dingle than he ever would have imagined but he would take things beyond the point of no return.

Will Al have changed the beloved villager for good or will he be able to redeem himself from murdering the ruthless businessman?

Emmerdale airs weekdays at 7pm on ITV, with an extra episode airing on Thursdays at 8pm.