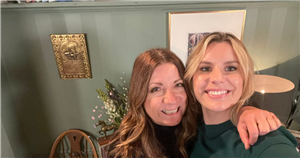 Emmerdale fans have so far been treated to two explosive episodes this week as the 50th anniversary of the ITV soap continues.

A deadly storm is battering the Dales, causing death and destruction, and resulting in at least one fatality so far in much-loved character Harriet Finch, played by actress Katherine Down Blyton.

Katherine had previously commented that the death scenes were emotional to read through and following the episode last night, she posted: "Well that was a tough secret to keep! Goodbye Harriet Finch. Taking away lots of wonderful memories & lifetime friendships. Thank you for all the lovely support, it’s very much appreciated. On to new adventures!!"

Stars of the ITV soap also took to Twitter to bid an emotional farewell to actress.

Olivia Bromley, who plays Dawn Taylor, posted an image of herself with Katherine and penned: "So unbelievably lucky to have worked with the best of the best.

"Going to miss the insanely talented and wonderful human that is @BlytonDow so much. Here’s to the legend that is Harriet Finch!!!

And fans were quick to add their tributes too, with one posting: "Already missing you, can’t believe you’re gone wishing you lots of luck and best wishes."

Another added: "Can’t believe that our Harriet has been killed off. good luck @BlytonDow you will be missed."

And a third wrote: "Going to miss Harriet so much! You've been absolutely incredible, and we will really miss you."

Emmerdale fans were left devastated on Monday night as Harriet Finch died after she was caught in a deadly storm explosion with Kim Tate.

A distraught Kim, who was left bloodied from the accident, confirmed the news to her new-husband and Harriet's ex, Will Taylor, after making her way home.

The news left Will, as well as his daughter Dawn Fletcher, who was previously Harriet's stepdaughter, devastated as they asked why she left her.

To which Kim replied: "There was nothing I could do, I'm so sorry, she's dead!"

While Dan Spencer, who was in search of his missing pregnant daughter Amelia Spencer, also found love interest Harriet's lifeless body as he was left devastated over the discovery.

During Sunday's hour-long 50th anniversary special, a deadly and terrifying storm hit the village straight after Kim's lavish wedding to Will.

Caught up in the storm was pregnant teenager Amelia, who had headed to Wylie’s farm for a picnic to meet her boyfriend Noah Dingle.

With the force of the wind, Amelia was blown about and her contractions started as she desperately called her dad, Dan, with her phone dying before she could give her exact whereabouts.

Sending out a search party, Harriet, who had previously tried to stop Kim's wedding to ex Will as she still loves him, went out on foot to look for Amelia.

While Kim, who was trying to celebrate her wedding reception with new husband Will, decided to go out on her horse to look for Amelia as she knows the land well due to Home Farm.

However, Harriet, who was almost knocked out by a building roof collapsing on her in the storm, decided to take a quad bike to look for Amelia but was caught in a crash when a tree broke in the wind, leaving her trapped in a ditch.

And as Kim started exploring the woods on her horse, she saw a bleeding and trapped Harriet as she helped to get her out of the wreckage.

Kim, who had previously had a fight with Harriet over her wedding to Will, then went to leave to keep looking for Amelia as Harriet begged her to stay.

In chilling last words, Kim told Harriet that she was going to live but at the exact same time the quad bike, which had been leaking oil, was struck with lightening as it caused an explosion, resulting in Harriet being declared dead on Monday.

For all the latest cast updates and juicy Emmerdale spoilers, sign up to our daily OK! Newsletter . Emmerdale continues weekdays at 7:30pm on ITV.