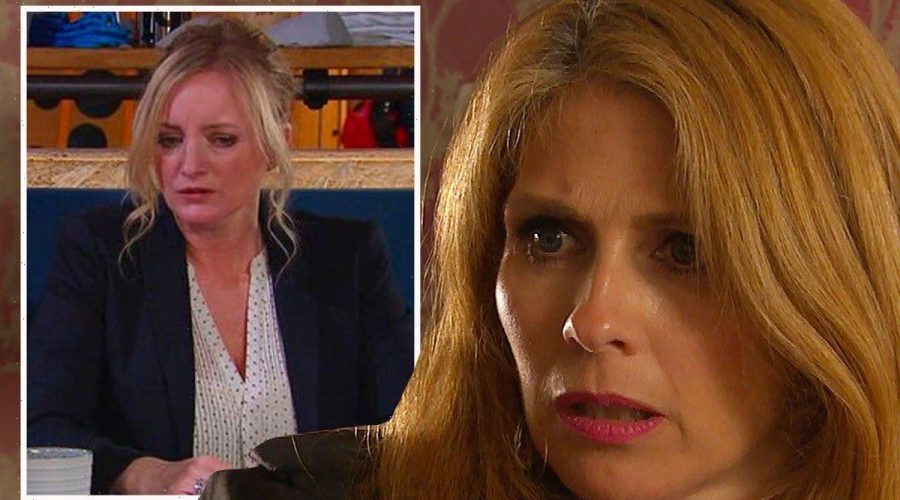 Bernice’s (played by Samantha Giles) most recent attempts at finding love on Emmerdale came when she thought there was a spark between her and Will Taylor (Dean Andrews), who ultimately chose to stay with Kim Tate (Claire King). To distract herself from everyone else being partnered up, she has thrown herself into work and her duties as a grandmother. However, when things end up getting messy between her and her sister, Nicola King (Nicola Wheeler) in upcoming scenes on the ITV soap, it seems she could end up with a new love interest as a result.

The drama continues as Bernice decides she is going to dip her toe into local politics, despite her sister being part of the council.

She knows this might not go down too well with Nicola, who has fought tooth and nail for her position, but she does it anyway.

As a result, the siblings end up competing over who can be better, cementing a new rivalry between the pair as they get more determined to prove the other wrong.

It’s not too long before they are joined by a gentleman from the council who is ready to hear what ideas Nicola has for the future of the local area.

Unfortunately, it seems her ideas are actually Bernice”s, who is left devastated by her sister’s ruthless and underhand tactics.

Knowing she needs to get revenge on her sister for stealing her ideas, Bernice could decide she is going to play dirty as well.

Her approach could be very different, however, as she would use her charm and beauty to try and win over the gentleman from the council.

As he falls hook, line and sinker for the plan, Bernice could realise she is going to be able to get her sister out of her current role.

With a vacancy needing to be filled, Bernice could tell the gentleman she wants the job and he needs to make it happen.

Though, as she is close to getting the role, she could realise she is actually developing feelings for this man.

I don’t really ever watch it

Despite knowing each other for two seconds, she would feel this could possibly be the time she finds herself a decent man.

Having let Will slip through her fingers and with Liam Cavanagh (Johnny McPherson) married, she wouldn’t want to lose this one.

However, if she were to enter into a relationship, she would have a dilemma on her hands as to whether to tell him she was using him as a pawn originally.

Not wanting any secrets, she could unburden herself and explain she wanted to get revenge on Nicola for the way she treated her.

Although he could understand where his lover was coming from, he could find it hard to move on.

Might Nicola have both been the reason Bernice found her man but also the reason she lost him as well?

The actress who plays Bernice, Samantha, explained when she returned to the show her character had a romance off-screen whilst she was away from the village.

Having left Liam at the altar, the actress added: “All I know is Charlie, the ex-husband she was caring for, she started up some kind of relationship with him again.

“But then he was having it off with his nurse as well, so he was having them both and she wasn’t happy about that. She does get it into her head that she thinks everyone is going to be on the same page.

“Had it not been for the fact that she’s been having some sort of relationship with the ex that’s gone wrong in Australia, maybe she wouldn’t have thought the door was open for her and Liam.”

How well do you know your British soaps?

How many times has Ian Beale been married in EastEnders?

What is the name of Bianca Jackson and Ricky Butcher’s son on EastEnders?

On EastEnders in 2002, who accidentally ran Jamie Mitchell over in his car which caused his death?

How many times has Corrie’s Steve McDonald been married?

What happened to Emily Bishop in Coronation Street?

Who murdered Maxine Peacock in Coronation Street in 2003?

Which incident in 1993 killed off four characters in Emmerdale?

When did the show stop being known as Emmerdale Farm?

On what date did Hollyoaks air its first episode?

What was the name of the much-loved Coronation Street pet dog who was put down in April 2020 after 14 years?

1996 saw the arrival of one of Hollyoaks all time bad boys and rival of Kurt Benson, but who was he?

Who is the longest serving character on Coronation Street?

Who shot Phil in EastEnders?

How many fires have there been at Corrie’s Rovers Return?

Get out of my pub, you’re no soaps fan

Upon her return to the show, Samantha always said her character’s life was going to be dramatic from the moment she stepped foot back in the village.

The soap star said at the time: “So I knew the time had come to be brave and take the leap back in 2019 to pursue my other passion of writing and focus on getting my first book published.

“I’m a big believer in fate so when Emmerdale offered me the chance to return as Bernice I took it as a sign that it was meant to be.

“I was delighted to be returning to play out Bernice’s future storylines which I’m sure are going to keep the audience entertained.

“I’m looking forward to releasing my next two books whilst juggling her hectic onscreen life,” she added, so could a new romance be the next chapter for the hapless character?

Whether Bernice gets a new love interest or not, it seems Samantha won’t be tuning in as she doesn’t watch the show in her free time.

The soap star said: “It’s terrible, I’m in the show, and I don’t really ever watch it, which is awful.

“You know what it’s like, it’s that time when you’re either putting the kids to bed, or you’re getting dinner or whatever.

“I’m a little busy at the moment, so there’s a few things going on for Bernice and a bit of comedy. I don’t watch the show very often. I don’t get a chance to watch it,’ she told OK!

Emmerdale airs weekdays at 7:30pm on ITV, with an hour-long episode airing on Thursdays.