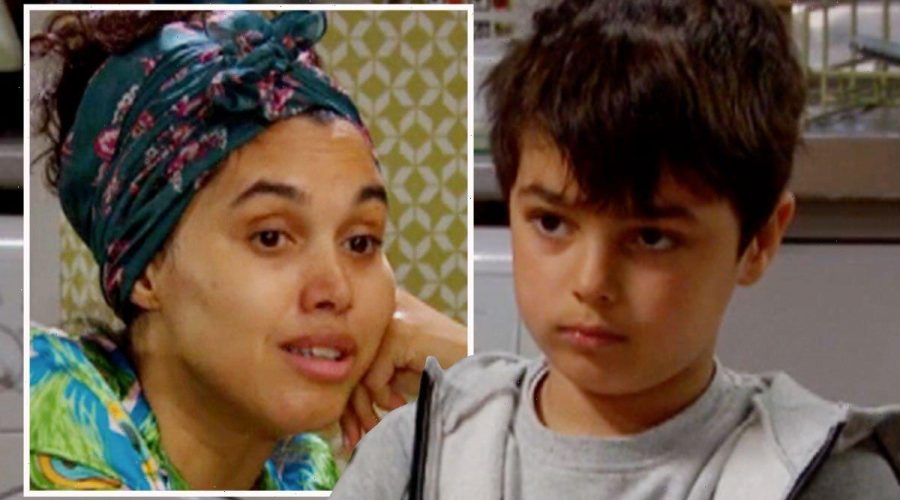 Johnny (played by Jack Jennings) has been sitting in the background as his mother, Vanessa Woodfield (Michelle Hardwick) has been getting acquainted with her new love interest, Suzy Merton (Martelle Edinborough). Recently, the newcomer to the Emmerdale explained she wanted to take things slowly with her girlfriend and didn’t want to go too far down the commitment route. However, during Thursday’s episode of the ITV soap, she surprised everyone by offering to look after the youngster but this could soon lead to deadly consequences as her past comes back to haunt her.

The episode began with Vanessa full of glee as she spent another amazing night with her girlfriend, who wanted to make the most of spending time with the village vet.

Having had a disastrous day at Take A Vow earlier in the week, the newcomer wanted to take her mind off things without turning to drugs.

Suzy wanted to know what her girlfriend was up to with her day off, only for Vanessa to reply: “I promised Johnny we would go to the park.”

“That sounds cool if you’ll have me,” Suzy said and although Johnny looked less than excited, his mother added: “Yes, of course. We would love that.”

As it seemed the trio were going to spend the day together, Vanessa received a call from Paddy Kirk (Dominic Brunt) about some work duties.

Once she got off the call, Vanessa explained: “Paddy is sorting some lambing crisis but now there is a cow that has got stuck and it’s stressed so I’m really sorry I’m going to have to cancel.”

“It’s ok. Work comes first,” a disheartened Suzy remarked before Vanessa realised she had no one to take care of her son.

“Oh no, what am I going to do with you?” she said, looking at Johnny and wanting to make a good impression, Suzy had a plan.

“I could have him,” the newcomer said, with Vanessa asking if she was sure she wanted to do it, knowing Suzy wasn’t ready for a huge commitment.

“Yes, I’m sure we could manage the park. Look, if you don’t want me to have him, I totally get it,” the businesswoman told the vet.

He hides it well

“No, it’s not that. I just didn’t know if you were ready for that kind of thing,” Vanessa replied with a tone of concern.

Suzy replied: “Well seeing as I’m spending more time here, it’s only right we spend time getting to know each other.”

Johnny looked dismayed as it seems clues are being dropped he is not Suzy’s number one fan.

“He’s excited,” Vanessa told her girlfriend, who said: “Yes, he hides it well,” knowing full well he wasn’t too keen on her.

Later in the episode, her fears were confirmed as when they were at the park, the pair were struggling to get along.

It was Moira Barton (Natalie J Robb) who managed to get Johnny to side with Suzy a little bit when she said the newcomer would take him to get a smoothie.

Although this wasn’t the best of starts to Suzy and Johnny’s relationship, it seems they will be spending more time together in the coming weeks and months.

However, with Leyla Harding (Roxy Shahidi) still encouraging Suzy to return to the world of partying and taking drugs, there is a chance the newcomer could start taking cocaine again.

This would mean she would start carrying around bags of drugs again and this is where she could make her mistake with Johnny.

On one of the days she is looking after him, he could go rooting around her belongings and find some of the drugs.

How well do you know your British soaps?

How many times has Ian Beale been married in EastEnders?

What is the name of Bianca Jackson and Ricky Butcher’s son on EastEnders?

On EastEnders in 2002, who accidentally ran Jamie Mitchell over in his car which caused his death?

How many times has Corrie’s Steve McDonald been married?

What happened to Emily Bishop in Coronation Street?

Who murdered Maxine Peacock in Coronation Street in 2003?

Which incident in 1993 killed off four characters in Emmerdale?

When did the show stop being known as Emmerdale Farm?

On what date did Hollyoaks air its first episode?

What was the name of the much-loved Coronation Street pet dog who was put down in April 2020 after 14 years?

1996 saw the arrival of one of Hollyoaks all time bad boys and rival of Kurt Benson, but who was he?

Who is the longest serving character on Coronation Street?

Who shot Phil in EastEnders?

How many fires have there been at Corrie’s Rovers Return?

Get out of my pub, you’re no soaps fan

However, by mistaking the cocaine for sherbet sweet, the youngster could end up ingesting the whole bag of harmful drugs.

Realising what has happened and the mistake she has made, Suzy would rush Johnny to the hospital as he would need to have his stomach pumped.

Unfortunately, it could be too little too late as the drugs could have already started to shut down his vital organs.

Due to how young is, his body wouldn’t be able to cope with the amount of cocaine he would have taken.

This would leave Vanessa heartbroken as she has done everything in her power to make sure her son would be safe and out of harm’s way.

Knowing she is to blame for Johnny’s death, Suzy would have to think about whether she exposes her drug problem to Vanessa.

If she were to tell the truth, it would be very likely she could end up losing her life as Vanessa would want to take revenge.

Though Suzy could end up sitting on the secret and it could be explained more clients at Take A Vow must have accidentally left the drugs behind.

This was accepted as an excuse when Jai Sharma (Chris Bisson) found drugs at the office but will people fall for it a second time?

Emmerdale airs weekdays at 7:30pm on ITV, with an hour-long episode airing on Thursdays.