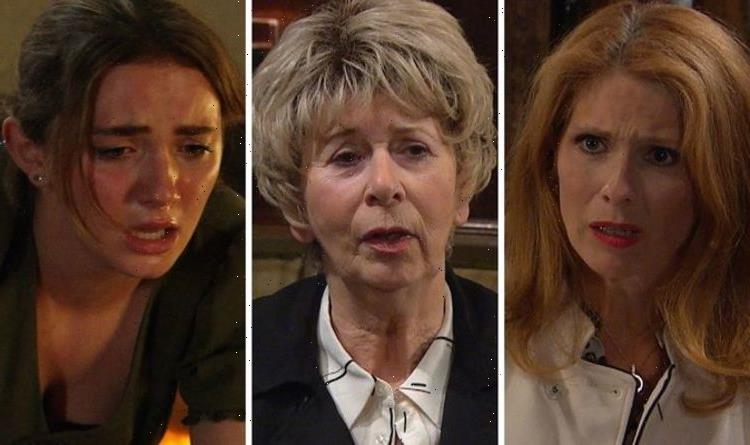 Diane Sugden (played by Elizabeth Estensen) will be saying goodbye to the village and her friends next week as she leaves for a new life after 22 years. However, as she says her final goodbyes and plans her new life away from the village, granddaughter Gabby Thomas (Rosie Bentham) goes into labour before being picked up – could Diane’s new life include Gabby and a new baby?

In upcoming scenes next week, Diana is planning to leave the village and sits down with Eric Pollard (Christopher Chittell) to discuss him buying out her stake in the B&B.

The pair share a tender moment, and it becomes clear she and Eric will miss each other immensely, more than either of them are willing to admit.

The next day, Diane shares her box of Woolpack memories with Chas Dingle (Lucy Pargeter) and her daughter Bernice Blackstock (Samantha Giles).

She soon finds herself agreeing to Chas’ offer of a goodbye party, forgetting Gabby’s plans to do a moonlight flit.

Meanwhile, Gabby invites herself to Laurel Thomas’ (Charlotte Bellamy) family dinner, with the secret plan of saying her own private goodbyes as she prepares to leave with Diane.

After the lunch, Gabby is left feeling overwhelmed at the thought she is about to leave everything and everyone behind.

However, Gabby’s sad emotions soon turn into anger as she snaps at an irrational Kim Tate (Claire King) and accidentally reveals she won’t be a part of her baby’s life.

Panicking, Gabby tells Diane they need to leave sooner than they intended but will this put a spanner in Diane’s plans?

Trying to pack without Kim noticing, Gabby soon suffers a pain in her stomach and tries to lug her suitcase out of Home Farm.

In excruciating pain, she crumples to the floor and starts going into labour; however, she is left alone in the darkness with no power and no battery on her phone.

After sharing an emotional moment with Bernice, they prepare to collect Gabby from Home Farm and escape from the village.

But they are unaware of Gabby’s plight as she fights her intense labour pains on her own.

Will Diane still be able to take Gabby and the baby with her?

Or will Bernice decide to join the pair in their adventures and leave with them both?

This week on Emmerdale, a majority of the residents are thrown into chaos as Super Soap Week is well underway.

Andrea runs down the cliffs to try and find Charles, while Meena looks on in happiness as she realises Victoria may have made her life easier.

Meanwhile, Charity Dingle (Emma Atkins) and Mackenzie Boyd (Lawrence Robb) sneak off away from the group to discuss their flirty situation.

Will Victoria, David, Charles and Manpreet survive the fall, or will there be devastation plastered across the village?