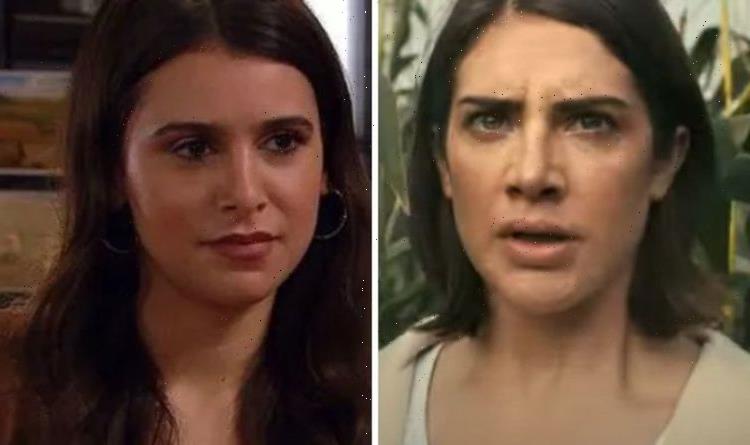 The ITV trailer features several terrified characters running through a cornfield as a cape-wearing Meena (played by Paige Sandhu) lurks in the shadows, following them. She menacingly comments: “There’s no way out.” Emmerdale viewers know the manipulative woman has ruthlessly made sure things go her way, and were stunned when she went as far as murdering Leanna Cavanagh (Mimi Slinger). Will fans soon be saying goodbye to Andrea Tate (Anna Nightingale), Manpreet Sharma (Rebecca Sarker) and Victoria Sugden (Isabel Hodgins)?

Fans know Meena will stop at nothing to get her way, and she has recently been fuelled by possessive jealousy over David Metcalfe (Matthew Wolfenden).

Frighteningly for Victoria, Meena recently found out she and David share a spark with each other.

The nurse has been away from the village for the past few weeks, but is set to be making an explosive return.

With Victoria already on Meena’s radar, she’s bound to be dangerously angry if she discovers Victoria professed her love for David while he recovered from a gunshot in hospital.

Vicar Charles Anderson (Kevin Mathurin) is frantically screaming for Andrea in the teaser clip, and she can be seen sprinting away, terrified of something.

She finds Charles and embraces him as Manpreet watches on. Could Meena target Andrea so her sister Manpreet gets the man she loves?

Andrea actress Anna confirmed her character’s exit earlier this year, so it seems likely she will fall victim to Meena’s trail of destruction.

The star will soon be heading on maternity leave for the birth of her second child, meaning Andrea will be bidding farewell to the Dales.

“Obviously I can’t give too much away but it’s safe to say fans need to watch out, there’s some explosive stuff coming up!” Anna teased.

Speaking to OK!, she added: “There’s going to be a lot of drama before I get to go off to have this little one. Watch this space, that’s all I can say!”

But if Manpreet sees her sister kill Andrea, will she threaten to expose her murdering sibling?

Despite making a grand gesture for Manpreet, she may be forced to kill her just moments after to ensure she isn’t exposed.

It’s likely Manpreet would try to stop Meena while she’s on the warpath but ultimately end up loosing her life too.

Finally, Victoria could be killed when she comes face-to-face with Meena after calling out desperately for David.

Meena wants David to herself and she doesn’t want Victoria, or her son Harry, getting in the way.

Meena could use the guise of a Halloween costume to conceal a weapon as she attempts to track down Victoria.

It may also help if she has to convince David it was an accident and she didn’t realise just how dangerous her Halloween “prop” was.

Emmerdale Producer, Kate Brooks revealed: “This is Emmerdale at its most ambitious as we take viewers on an exhilarating journey through a series of showstopping stunts.

“As the twists and turns come thick and fast, viewers will be left on the edge of their seats, and with Meena at the heart of the story it means only one thing; not all our villagers will survive.

“Daring and audacious; this is Emmerdale like you’ve never seen before.”

Could Andrea, Manrpreet and Victoria be leaving the village for good because of Meena? And will the evil resident finally get her comeuppance?