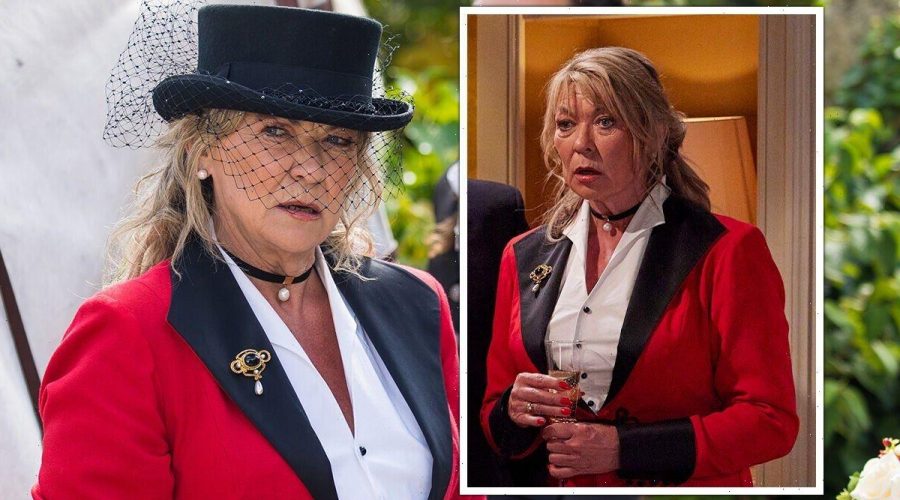 Emmerdale: Liv dies after getting crushed by caravan

Kim Tate (played by Claire King) tied the knot to Will Taylor (Dean Andrews) as part of the Emmerdale special. However, their wedding day turned into horror when a storm swept through the Yorkshire Dales, leaving some villagers’ lives in grave danger. While Kim survived after being seriously injured as the storm ripped through the woods as she was searching for Amelia Spencer (Daisy Campbell), the actress who plays the businesswoman admitted filming “nearly finished me off”.

Kim rode into the woods on her trusted horse, named Ice, to search for Amelia who had gone into labour early in a remote barn.

She was joined by her love rival Harriet Finch (Katherine Dow Blyton) who was driving through the woods on a quad bike in search of the pregnant teenager when she fell down a ditch and the vehicle landed on her.

Kim tried to help Harriet when she found her in a terrible state but things went from bad to worse when a lightning bolt struck the quade bike and the pair were caught in an explosion.

Harriet tragically died following the explosion and Kim had no choice but to leave her and seek help in the village.

Will was pleased Kim made it back to Emmerdale alive but did not believe she tried to help the dying police officer in the woods.

Kim broke down in tears as she promised her husband she did everything she could to help Harriet, despite the latter admitting she was still in love with Will ahead of their lavish wedding.

Could divorce be on the cards for the loveable rogue and Kim if there is no trust between them?

Ahead of Harriet’s heartbreaking death scene being aired, Kim actress Claire confessed filming against the wind machines was incredibly difficult and caused her to be on a course of antibiotics.

The 60-year-old soap icon told Express.co.uk and other media: “Never mind the end for Kim it nearly finished me off, being thrown around woods in all that dirt, I am too old for that.

“It was quite a test actually but I was very lucky because as you know I have ridden for most of my life and as far as the horse was concerned, that was great and it was no problem at all.

“It was actually a very hot day and it’s supposed to be October, and I have all these layers on and clothes and yes it was rather sweaty.”

“It was also very dirty and dry in the woods,” the actress remarked.

She was on antibiotics for about a week after filming because her eyes and nose swelled up.

After taking the course of pills, a huge seedpod came out of Claire’s nose and got infected.

“It must have blown up there due to all those wind machines,” she quipped.

“It was somewhat traumatic but we did manage to have a bit of a laugh Katherine Dow Blyton and I.”

However, the wedding scenes were more enjoyable for Claire as she rode into the churchyard on her horse.

“You never know what is going to happen, I had never sat on that horse until that day but I just had to trust the wrangler and have a few test runs.

“He was absolutely fine but I think if they suspect you’re nervous then they will get nervous. But he was amazing and we had to canter down hills.”

Emmerdale continues on weeknights from 7.30pm on ITV.