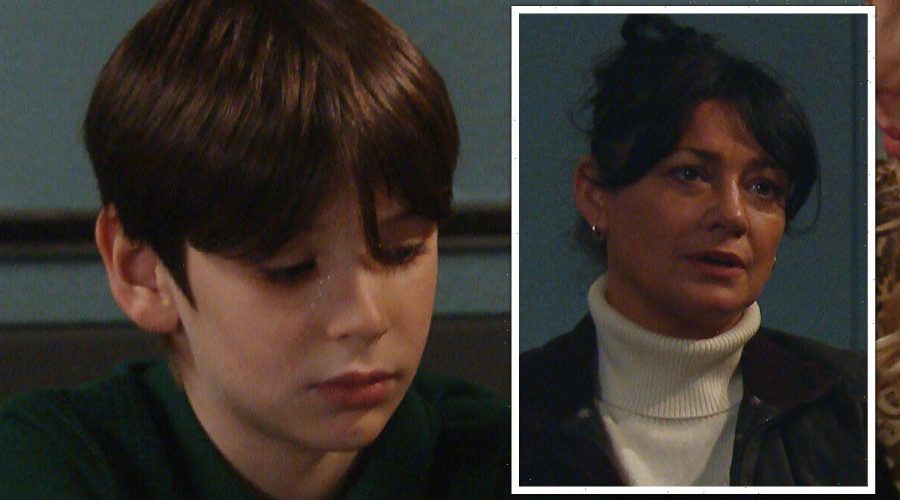 Emmerdale: Moira Dingle asks Caleb for help outside the Woolpack

Kyle Winchester (played by Huey Quinn) has been riddled with guilt since shooting Al Chapman (Michael Wildman). The Emmerdale youngster’s family has been trying to protect him, including his father Cain Dingle (Jeff Hordley) who is willing to take the fall for Al’s murder. However, ITV soap spoilers have revealed the 10-year-old will tell the police he was the true killer, not his father.

At Butler’s Farm, Moira Barton (Natalie J Robb) is also confronted by the police, and at Jacob’s Fold, Mackenzie Boyd (Lawrence Robb) is alarmed when the police want to take him to the station to answer some questions.

In a police interview room, Moira sticks to her story when DS Malik questions her about her brief trip away with Kyle.

During his interview, Mackenzie’s tight-lipped when DS Malik presses him for information on Kyle.

A panicked Amy desperately tries to keep to the line she and Moira have agreed on as her police interview continues to intensify.

Poor Matty Barton (Ash Palmisciano) is rattled when DS Malik reminds him of the serious consequences of perverting the course of justice.

Will he break his pact with Moira and Amy to tell officers the truth?

Later on, Matty, Moira, Amy and Mackenzie regroup at Butler’s Farm after their long and tiresome afternoon at the police station.

They all realise how high the stakes are for everyone involved in the cover-up – including Kyle.

Caleb is fully aware of the situation, but he becomes defensive when Amy and Moira question his methods.

Meanwhile, Moira is relieved to be back on speaking terms when her partner Cain arranges a call from prison for that afternoon.

But when DS Malik arrives at Butler’s Farm, to bring an anxious Kyle back in for questioning, everything takes a turn for the worse.

Down at the police station, Kyle reaffirms that he was responsible for killing the late businessman Al.

What will happen next for the Emmerdale youngster following his admission?

Kyle actor Huey has been involved in some hard-hitting scenes in recent months, which his co-star Natalie opened up about.

The Moira star told The Mirror: “He always knows our lines as well, it’s really annoying. And, because he’s grown up around [acting] now he genuinely does have a love for it.

“Huey watches them line the shots and watches the camera lenses and he’s like, ‘That’s a good shot’.

“So he’s getting an eye for it in different ways, which is really lovely to see.”

Emmerdale airs on weeknights at 7.30pm on ITV.