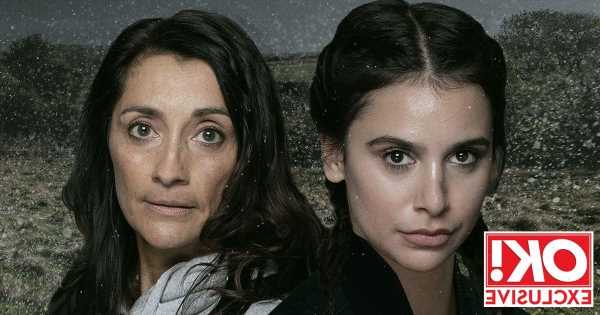 When we caught up with Emmerdale stars Paige Sandhu and Rebecca Sarker for their exclusive OK! festive shoot, we wanted to find out all the juiciest behind the scenes secrets.

After speaking to Paige – who plays Meena Jutla in the ITV soap – we now have our eyes peeled for a hidden gesture that she and Rebecca have been trying to work into a scene since Super Soap Week.

"There's one thing that we did over Super Soap Week. It was the first time that me and Rebecca we're allowed to touch on screen, and because of our relationship – on screen as sisters and off screen as friends – we came up with a secret handshake for Meena and Manpreet [Sharma]," Paige explained.

She continued: "We had it in a scene, but unfortunately it got cut."

Paige and Rebecca played crucial roles in the action that unfolded during Super Soap Week, with Rebecca being a part of the terrifying bridge collapse and Paige flexing Meena's murderous muscle once or twice.

"I kind of knew that it would get cut because you didn't really have time for it in the scene," admitted Paige. "However, we're constantly trying to find a place to put that in. I really hope that we get it and at one point and it doesn't get cut!"

However, with Meena and Manpreet currently at odds after their recent falling out, we're wondering if the sisters will ever be in a place to share their secret handshake again.

Paige also revealed an interesting detail about the set.

"A behind the scenes secret that the fans may not know is that when we're filming in the village the salon and woodbine cottage are actually our dressing rooms," she explained.

For all the latest cast updates and juicy Emmerdale spoilers, sign up to our daily OK! Newsletter .

Paige continued: "So, if you ever see them in the background there might be some actors doing their makeup in there, learning their lines, eating some food, or whatever – sleeping maybe!"

Until then, fans of the soap have got an explosive Christmas to look forward to with the Woolpack set to burn up for the holidays.

Read Paige and Rebecca's full interview – and see all the snaps from their joint OK! shoot – here. Emmerdale continues weekdays at 7pm on ITV.