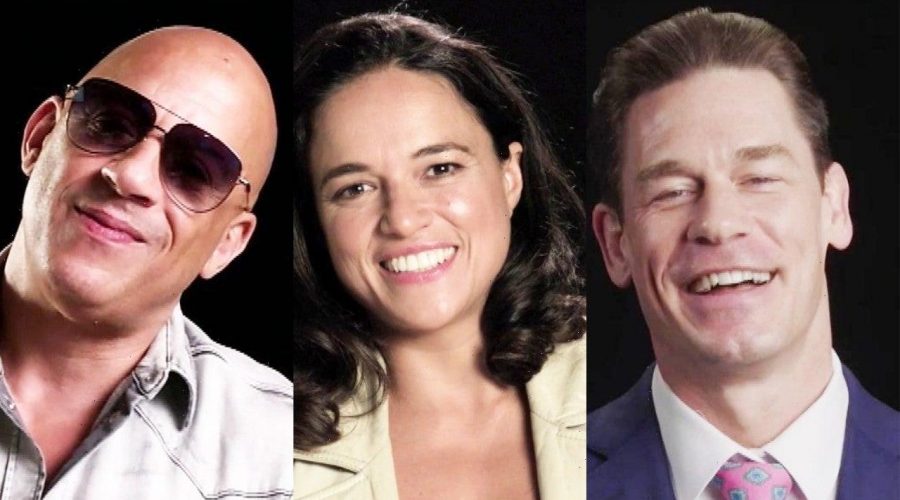 It’s been a long day without a new installment in the Fast & Furious franchise, but F9 is almost here!

The latest trailer for Fast & Furious 9 dropped on Wednesday, thrilling fans with another look at the upcoming action-packed installment in the saga of Dominic Toretto and his family of street racers turned high-octane vigilantes.

The film was originally set for release in April 2019, but was delayed several times — first by the release of spinoff Hobbs & Shaw, and then by the coronavirus pandemic, which has kept movie theaters closed over the past year.

“When we actually had to push the movie, it was the right thing to do, but then a little part of me felt like I was letting everyone down,” franchise star Vin Diesel admitted to ET’s Nischelle Turner this week, when the F9 cast, along with director Justin Lin, shared their thoughts on the mind-blowing new trailer and the upcoming film, which fans will finally get to see in theaters on June 25.

“I cannot tell you how grateful I am to be a part of something that has been adopted by the world in the way that it has, that two decades after that first car race, we are here to open up Fast 9,” Diesel added. “All I can say is, blessed, humbled and grateful.”

It’s good to be back. Watch the new #F9 trailer now. pic.twitter.com/Ewy0EZfhBv

“It’s surreal,” agreed Michelle Rodriguez, who plays Letty Ortiz, Dom’s teammate turned wife, in the franchise. “I was such a baby back then, you know? And to see how much we’ve grown — now Vin’s got a whole entire family! I mean, I’m godmother to his kids! That’s crazy.”

After a trying year for fans all over the globe, F9 is hoping to be a bright spot, and Diesel is especially thrilled that the movie is one of the offerings “bringing people back to the theatrical experience.”

“With all that we’ve gone through, what we’ve lost is being entertained together as a community, as an audience, as one body. That unifying thing that happens when we go to the movie theater and we are entertained as an audience,” he noted. “And that is what’s going to happen.”

“There is something to be said about Fast & Furious being one of those movies that you see in the theater,” Rodriguez added. “It’s the experience of it. It’s the fact that, you know, you’re three generations in. People watched it in the 2000s with their parents, now they’re bringing their own kids to the game, to the mix. It’s a tradition.”

Even Lin — who’s been away from the franchise since directing Fast & Furious 6 in 2013 — admitted that he feels like he really never left the team behind. The director oversaw the series’ evolution, starting with 2006’s The Fast and Furious: Tokyo Drift, through the fourth, fifth and sixth movies, and helped shepherd the creative transition that took Dom and his crew from Los Angeles street racers to globetrotting enforcers. Now, he’s back with his film family, and ready to shape the end of an era.

“When I was gone, especially when I travel, fans will stop me and talk about the franchise and the characters,” he added of the films’ enthusiastic fanbase. “I remember shooting [2016’s Star Trek Beyond], I was in the cutting room and Vin would call me to talk about Dom as if like, you know, we’re continuing our journey. So it felt right when the right idea landed that it was time to come back.”

F9 brings back some familiar famous faces in addition to the well-established crew — which of course includes Tyrese Gibson as Roman Pearce, Chris “Ludacris” Bridges as Tej Parker, Nathalie Emmanuel as Megan Ramsey, and Jordana Brewster as Mia Toretto, Dom’s younger sister. Helen Mirren is also returning to the franchise as Shaw family matriarch Magdalene, and, in a fun bit of fan service, Sung Kang is making his grand homecoming as Han Lue, a member of Dom’s team who was thought to have died at the end of Fast & Furious 6.

Charlize Theron is back as well, reprising her role as the cyberterrorist Cipher from 2017’s The Fate of the Furious. “She’s so fearless. She was literally up for anything,” Lin raved of “inheriting” the Oscar winner in his return to the franchise. “That for me, as a creative, means this is a character I have to bring back and we had to keep exploring.”

And Cipher isn’t pulling any punches in F9, targeting Dom via his own flesh and blood. The new film introduces a previously unknown member of the Toretto nuclear family, Dom and Mia’s brother, Jakob, played by John Cena. Jakob is a master thief, assassin, and, of course, a high-performance driver who poses a major threat to Dom, and Cena raved to ET about joining the franchise, which he called the “opportunity of a lifetime.”

“Fighting Dom Toretto in The Fast & The Furious is like being in the main event of Wrestlemania. You get thrust in there with a marquee talent on a blockbuster film franchise, you have to deliver,” he said, teasing his intense showdowns with Diesel. “I think the theme here is Dom Toretto finally, after eight installments, facing the one thing that he never can [run from], and that’s his past.”

“This is a life-changing experience for me and I was invited into the success,” Cena added. “I understand that the main players of the franchise started from the foundation and built this tremendous platform and I do not take that lightly.”

Of course, the other familial bond that the film can’t help but address is the continued absence of franchise star Paul Walker, who died in 2013. Walker’s character, Brian O’Conner, was pivotal to the series as Dom’s rival turned right-hand man and Mia’s husband, and when the actor died during production of Furious 7, the decision was made to not kill off his character, but to find creative ways to work around the absence. Brian and Mia are referenced in The Fate of the Furious, but not seen onscreen, however, with F9‘s focus on the Toretto family, it was time to bring Brewster back into the fold, despite the fact that Walker couldn’t be by her side.

“Jordana Brewster, she’s a big part of the franchise,” Rodriguez noted, sharing how excited she was about the franchise’s female stars and their action-packed roles in the upcoming film. “She’s one of the OGs of the original, and to lose her completely because of an idea, or because of the fact that we lost somebody dear to us — we can’t approach in the story?”

“So, in the Fast & Furious world, he’s still alive in our hearts, and that’s how we’re gonna keep it for now, you know? Until we can answer that very tough question, story-wise, I think that it’s the right thing to do. It’s to keep him alive in our hearts and in the story,” she added.

“There’s not a day that we filmed, there’s not a moment in thought and creation that his spirit isn’t with us,” Diesel said of Walker’s absence. “He brings a spirituality to the franchise that we all feel. I can’t think about a Fast & Furious without him being a part of it in one way or another. “

At the end of the day, the soul of the original Fast & Furious franchise rides with Dom Toretto, and by extension, with Diesel. But is the end of Dom’s story soon upon us? With two final movies lined up starring the OG crew, Lin can’t help but wax poetic about the journey that the franchise has taken over the course of nine films so far.

“I’m not approaching Fast 9 as just one film,” he explained. “I’m talking to Vin and everybody about Fast 9 as the beginning of our last chapter… I think it’s a very profound exploration that we’ve been doing for the last 20 years. I don’t think it’s anything that’s logical or physical, you know? It’s more philosophical.”

As for the future? “I think that, to me, there’s so many compelling characters in this universe I feel like we’re gonna keep exploring,” he admitted. “But I think when it comes to this saga, this journey, there is going to be an endpoint… I think that’s as far as I can kind of share.”

“It doesn’t happen without Vin,” Cena added of the franchise, “and it’s amazing to see that he still is the heart and soul of the franchise after 20 years. There’s very few titles that can say that they’ve held box office success for so long… I can promise you F9 delivers.”

“It’s a very beautiful journey,” Rodriguez said of her time in the film family. “To think that we could represent something for people around the world is a whole other monster. We take it very seriously and hold it close to our hearts, and treat it very preciously.”

As for Diesel, he only had one word to share as he looks ahead to the final adventures of the original Fast & Furious crew: “Bittersweet will be the final chapter. Bittersweet.”

F9 is set to premiere in South Korea on May 19, before hitting theaters in the United States on June 25. See more on the franchise in the video below.