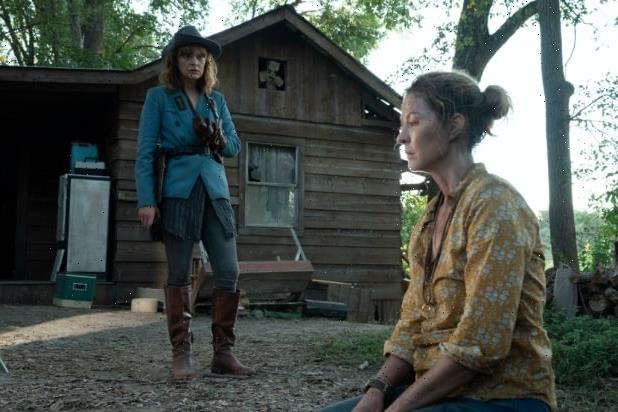 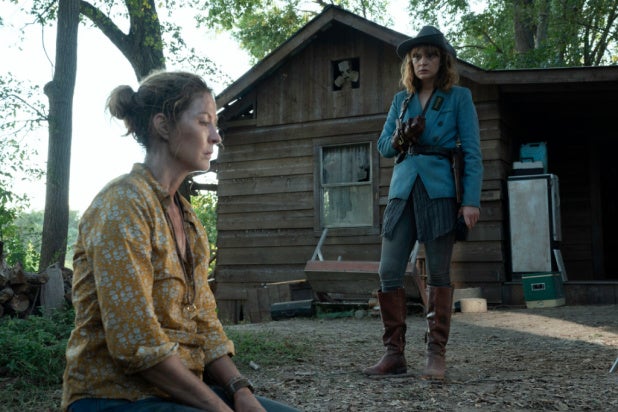 (We’ve got some major spoilers here for the “Fear the Walking Dead” episode that aired April 18 on AMC. Like, the biggest ones. You’ve been warned.)

Well, I don’t think that went quite the way anyone expected it to.

This week’s episode of “Fear the Walking Dead” had the feel of a season finale — or at least mid-season finale. It did, after all, wrap up a multi-season plotline when Virginia (Colby Minifie) lost not only her power, but her life at June’s (Jenna Elfman) hands as well. And on top of that, several big character arcs hit their conclusions this week, such as Sherry (Christine Evangelista) and Dwight (Austin Amelio) once again going their separate ways.

There’s plenty of uncertainty at the moment, with Morgan’s little settlement over here, and Strand (Colman Domingo) and his little army over there, and the remaining Virginia loyalists still out there somewhere. But for now I just wanna talk about one thing.

June was right to kill Virginia.

Morgan’s (Lennie James) rhetoric about how they’re no better than Virginia if they execute her for her crimes sounds great, and it’s something that numerous characters in the “Walking Dead” TV universe have espoused over the years. And maybe — just maybe — the very long view will tell us he’s actually right.

But these aren’t ideal circumstances, and choosing not to mete out justice can have major consequences as well. We saw that on the main “Walking Dead” series after the Savior War when all the Saviors got essentially a blanket pardon except for Negan, who was kept alive in lockup for six years.

The issue that arose there wasn’t really about the lack of punishment. It was the complete lack of a real reckoning with what had just happened. The Saviors’ reign of terror on the communities wasn’t something that could be easily forgotten. That trauma was immense. It made perfect sense that some of the residents of Oceanside, where the Saviors slaughtered every man and boy, couldn’t be chill about this blanket amnesty.

So the communities ended up with a serial killer picking off former Saviors, which in turn stirred up other problems. All of it could have been avoided — emphasis on could — had Rick & Co. implemented some kind of truth and reconciliation situation so everyone would have the opportunity to actually deal with what had just happened.

But they didn’t, and a bunch more people died than needed to.

Morgan’s repeated return to this pacifistic mindset is one of his most annoying traits. It’s his eternal conflict. And he was wrong here. A strong hand was needed, not a soft one.

On the other side, torturing Virginia to death or whatever Strand had planned isn’t going to help either. It’s not a great precedent, sure, but it would probably make everyone involved a worse person.

Virginia herself knew exactly what needed to be done — just kill her quickly and be done with it — though she probably wasn’t thinking about it as anything other than a way to not have to suffer through whatever Strand and his pals were going to do to her. But the reality of the situation was that this was absolutely necessary because Morgan and Alicia (Alycia Debnam-Carey) wanted to let Virginia run off with Dakota.

That would have been a disaster, and the sort of thing that might have started a war with Strand’s group.

In a way, this might have been the best possible way for it to happen under the circumstances. An actual trial, in which Virginia’s many crimes would be put on display, would have been ideal, but the situation was far too volatile for that — and nobody seemed to even consider that option anyway.

But hey, this way Morgan gets to keep his principles. Strand and pals get their justice. And June gets some measure of justice for John’s death in the last episode. But with June taking matters into her own hands, it’s just the one person who has to bear the burden of dealing with it, and the level of tension has greatly decreased with that situation dealt with permanently.

Hopefully, the others won’t come down too hard on her, and she won’t exile herself or something. She provided an extremely valuable service to the community by killing Virginia — I can only hope the others will come to see it that way too.