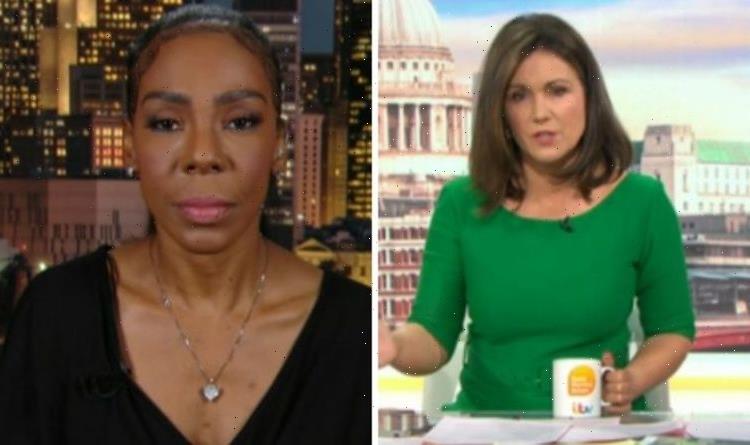 Drea Kelly, who was married to the now-convicted sex offender for 13 years, talked to the Good Morning Britain presenters about her experience and the outcome of his trial on Monday, which saw him convicted of all charges of sexual abuse and sex trafficking. But some ITV viewers have condemned the hosts for the nature of questions asked to Drea, with many arguing that she was forced to “relive” her abuse.

The US singer behind several hit 90s songs has been found guilty of running a scheme to abuse women and children for two decades.

Witnesses and victims spoke out in court during the six-week trial to testify against the 54-year-old.

The jury found him guilty of all charges on Monday, with his sentencing due to take place in May.

Susanna asked the 47-year-old what it felt like from her standpoint of being married to the singer for 13 years and having three children with him.

She continued: “My heart goes out to survivors who have come forward, but my heart breaks as a mother because this is the legacy my children will have to deal with.

“His blood runs through my children’s veins, they can’t get away from that.”

“You said anything could set him off, from milk being cold to wearing something too revealing or too much tone in your voice, if someone came to the house and you spoke – what was that like?” Susanna probed.

“It’s a life of contsant fear,” Drea responded. She described her experience as “walking on eggshells”.

She detailed being afraid to speak “if you weren’t supposed to” around her former husband.

“It was very much Dr Jekyll and Mr Hyde,” she said.

“Now that there is a conviction, does it release any of the weight on you that this has been recognised in a court of law and he will serve time, possibly the rest of his life, in prison?” Asked the host, 50.

“In a way it does and in a way it doesn’t,” Drea answered. “Like I say, it’s great that we’ve taken a step forward, but it’s what happens outside of the courtroom that is most important.

“That women are supported to even feel like they have the strength to come forward and tell their stories.

“If they’re still victim shaming, victim-blaming, and women being afraid to even speak their truth, we can never get to a court system where justice can be served so we have to start there first.

“When women, children and even men – because they can be victims of domestic violence – feel supported by society to come forward and tell their stories, that’s when justice is really going to be served.”

Taking to Twitter, some weren’t impressed with the questioning directed at Drea.

Step commented: “Not feeling Susanna’s questions or sympathy or support with this topic #GMB.”

Simmy Simzx seemed to agree, she penned: “The questions they are asking in this interview… why are you asking such weird questions to a woman who has been sexually assaulted? Clearly she doesn’t want to relive it #gmb.”

“#gmb not paying any notice of moral standards regarding r Kelly. Kids are watching this show you know. Report on it yes, but don’t give detailed interviews at this time of the morning. Your producers need to go back to school,” Andy Cooke added.