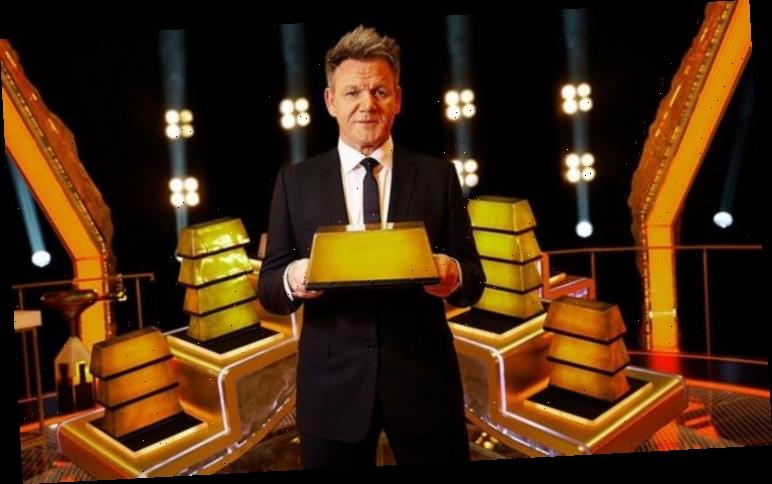 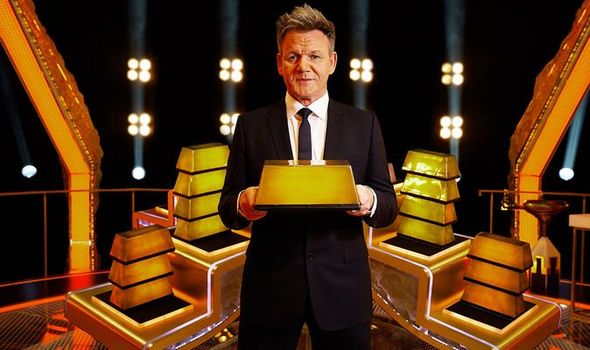 You might want to sit down before you read the next paragraph, it’s that shocking. Gordon Ramsay – the man who once said: “I’ve never been a hands-on dad. I’m not ashamed to admit it, but you can’t run a restaurant and be home for tea at 4:30pm and bath and change nappies” – is a reformed character.

The multi-award-winning chef confesses that during lockdown he has really enjoyed changing his youngest child’s nappies, and says that one of the joys of the past year has been the opportunity to bond with his one-year-old son Oscar, whose birth was announced thus by Gordon on Instagram: “After three Baftas and one Emmy… finally we have won an Oscar.”

The 54-year-old, who has been married for 25 years to Tana, and is also the devoted father of four other children, Megan, 23, twins Jack and Holly, 21, and Matilda, 19, tells the Express: “I must have gone through about 150 nappies with Oscar. I can literally change a nappy now with my eyes closed.”

An idea for his next TV series, perhaps?

Gordon, who almost burst with paternal pride when Jack joined the Royal Marines in October, continues: “Oscar has become my best mate. And how fitting is that? My first best mate is now a Royal Marine Commando, and I have a new best mate in Oscar.”

The chef has evidently lapped up the chance to grow closer to his baby son during lockdown. 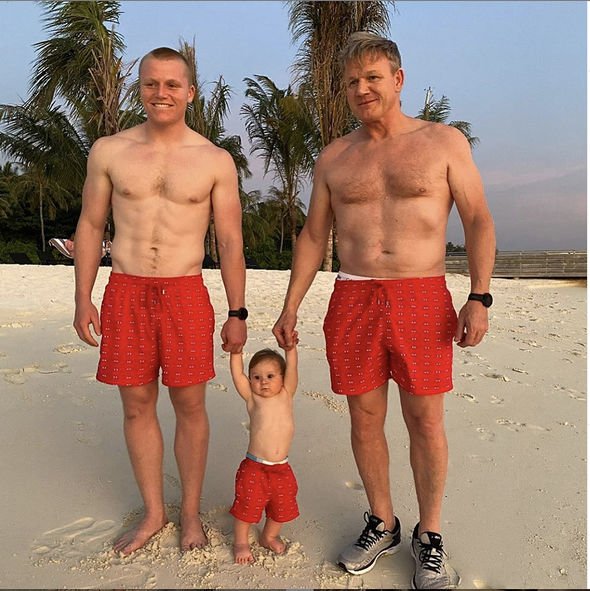 But for all that, there is one thing that Gordon has not yet been allowed to do.

“I think he should have a buzz cut. I’d like to suggest we go for a number two on top and shave the sides with a number one. But trying to get that past Tana at the moment is impossible.”

It’s not just Oscar whom Gordon has relished being with during the pandemic.

Since March, the chef has loved hanging out with Tana, 46, and their five children.

“Having a chance to spend that time with the family is unprecedented. On top of that, it has been quality time,” he says.

“We were very fortunate having all seven of us together for several months. The only one we’re missing now is Jack – he’s off as a Royal Marine. But the opportunity to reconnect as a family has been extraordinary.”

Given that he has, over his 35-year career, amassed no fewer than 16 Michelin stars, Gordon has, quite unsurprisingly, taken on the mantle of the family cook during lockdown.

As an example, he says that last night he made the family “some amazing ribs”.

However, what he has been most proud of doing in the kitchen over the past year has been baking bread. “Just making a starter and using a wonderful, yeast-activated, natural fermentation process to make the most delicious sourdough has been fabulous.”

Even so, Gordon admits that his job as the family cook has been pretty full-on. “For a chef in lockdown, it’s like running a restaurant seven days a week. No one wants to go home. It’s just constantly, ‘What’s for dinner, Dad?’ But I’m enjoying every minute of it, between you and me!”

In addition, he has had the stress of running his restaurant empire at a time when most of his establishments have been closed for the best part of the last year. He acknowledges that it’s been hard.

“I think the Government has been super supportive and incredibly concerned. That means landlords have been able to take a bit of a breather, which is good.”

But the pressure has still been enormous. Gordon admits: “We had to cancel 2,500 reservations through the month of December.

“That’s the one glory month that gets us through that first part of the year when everyone goes dry and becomes a vegan for 90 days. So I’m not going to lie, it’s been tough.”

Always eager to accentuate the positive, though, the chef continues: “Fingers crossed, every restaurant in the group will be reopening in March with new additions.

“Over Zoom we have been trying and testing new developments. I also spend a lot of time on a daily basis with the youngsters in the group, which is super, super important. I’m encouraging them to take long walks and get a lot of fresh air. I want them to feel free.” 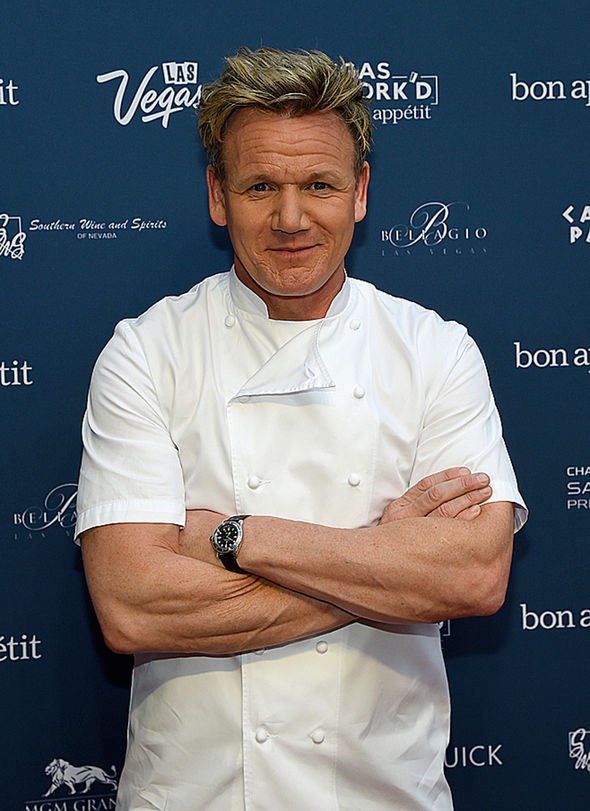 So what has Gordon missed most during the lockdown?

“I haven’t missed the food critics!” he jokes. “But those guys are coming back!

“What I have missed more than anything is the atmosphere that restaurants create. That moment when you open those doors, you walk into a restaurant, you sit down with someone you haven’t seen for a couple of weeks, you’re breaking bread, and you’ve got a lovely cocktail and amazing food – that’s what I have missed.

“And then the smiles on people’s faces. There’s something quite unique about being in that arena.”

During lockdown, Gordon has also been developing a very surprising new career as a BBC1 game show host.

Gordon Ramsay’s Bank Balance is set in a cavernous vault where contestants have to stack as many gold bars as possible on a Bank Balance Board. Their attempt to win the jackpot of £100,000 quite literally hangs in the balance.

The host reveals that he had to be extremely careful not to knock over the teetering pile of bars with his massive size 15 feet: “I had to move with grace. I was like a swan gliding across a lake up there!”

Unsurprisingly, Gordon serves us platefuls of his trademark charisma in his debut as a game show host.

All the same, he says, he made no assumptions beforehand that he would be God’s gift to game show hosting.

“FYI, I didn’t go in all cocksure about becoming a phenomenal game show host,” he laughs. “I’d never go into this thinking it would be a home run for me.

“I would never take for granted the idea of a prime-time show at 9pm on BBC One stripped across 10 nights. I know there are going to be a lot of eyeballs on this thing.”

In the kitchen, Gordon is known for roasting his staff if they underperform.

In a memorable putdown, he once told a failing chef: “This lamb is so undercooked, it’s following Mary to school!”

So his legions of fans will no doubt be delighted to learn that he has not toned down his shouty “say it as it is” persona one little bit in this new shiny-floor environment. 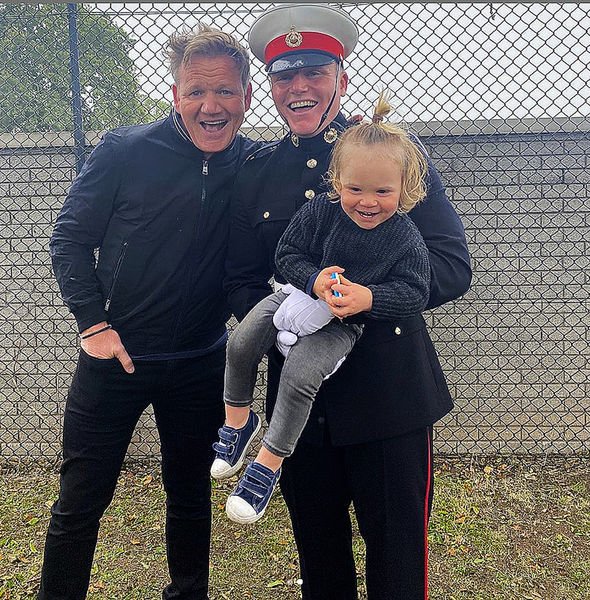 He barks orders at the contestants as if they were incompetent sous-chefs who had burnt the dauphinoise potatoes.

He cries out, “Don’t mess this up!” and “Can you two wake up?” He also occasionally uses language that is not fit to print in a family newspaper.

The presenter explains: “I wanted to be me, and not be in a straitjacket. You know, I needed air, I needed room to breathe.”

Neither was Gordon going to mask his eagerness for the contestants to do well. He says that when you are hosting a major BBC One game show: “You wake up in the morning and you **** yourself.

“And so if I’ve got to get my act together, trust me, there’s nothing wrong with me telling those contestants, ‘I want you to do well. I’m here to help you. I can’t answer the questions for you, but I’ll be really annoyed if you don’t win’.

“I take it personally if they don’t do well. I feel bad because there’s some big money at stake.”

Gordon adds: “These are real people who are experiencing some difficult, traumatic times at the moment. And, you know, 10 grand, 15 grand, 25 grand, 100 grand – that’s life-changing money. So what I got excited about is how seriously they took it.”

He clearly thrives on dealing with the contestants, observing: “I’ve never had a problem interacting with members of the public. I look at the contestants on Gordon Ramsay’s Bank Balance, and they are like my sister’s friend or my mum’s friend.”

One thing Gordon cannot do, however, is steady the contestants’ nerves. “Of course, you have a little pre-show chat with them, and you try to get familiar with them.

“But when they walk up those stairs onto that amazing set, all of a sudden you see just how nervous they are.

“Their lips are quivering, they’re twitching, they can’t convey their words. And so you just have to calm them down. But I love that kind of pressure!” Gordon, who is also an executive producer on the programme, likens the process of dreaming up a new game show to launching a restaurant.

Breaking in a new show is as difficult as opening a restaurant. You’ve got lots of bits and bobs to iron out and you’re trying to understand the level of discipline required to stop overworking it and be really focused on something tangible.”

lOnce the show is up and running, it is also similar to operating a restaurant, Gordon reckons. “When I have got 25 chefs in the brigade, and we get the four-minute countdown to bring a dish together, I’m depending on every

G ch fou dis co tog yo corner of the kitchen to come together. It’s no different in this game. It’s packed with jeopardy because you’re up against the clock.”

Before he goes, Gordon addresses the elephant in the room: the very obvious fact he does not have the cosy, cuddly demeanour of a traditional game show host. After all, he may be the only game show host in the world who swears at his contestants!

“Have you ever seen me on television?”

he laughs loudly. “Do I look like a game show host?”

Clearly not, but I think audiences will still love helping themselves to Gordon Ramsay’s Bank Balance.

15/02/2021 TV & Movies Comments Off on Gordon Ramsay – The man with the golden fun: Fiery chef takes on new challenge
Lifestyle