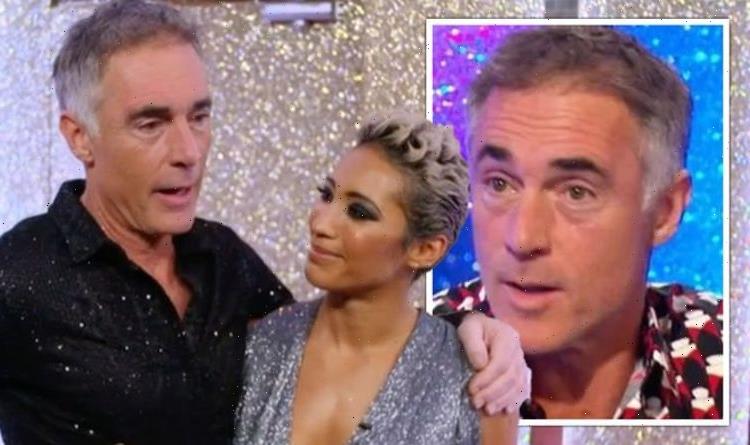 The Strictly Come Dancing stars will take to the dance floor once again on Saturday night, as they battle it out in the iconic BBC dance contest. The competition is heating up among the celebrity contestants as they head into Week Four. While many viewers speculate who will be next to be eliminated, Greg Wise and his dance partner Karen Hauer have been dealt a huge blow.

Katie McGlynn and her partner Gorka Marquez became the latest couple to be voted off Strictly last week, after failing to impress the judges and viewers at home.

They found themselves in the bottom two against Judi Love and her partner Graziano Di Prima.

Sadly, Katie and Gorka’s Cruella-themed American Smooth wasn’t enough to keep their place in the competition.

They followed in the footsteps of Nina Wadia and Neil Jones who were the first to be eliminated.

Meanwhile, Greg has performed well in the competition so far, taking on dances such as the Paso Doble and the American Smooth.

However, it seems bookmakers have lost faith in the actor’s dance skills as they’ve tipped him as the most likely to be eliminated this week.

Ladbrokes currently has Greg with odds of 5/4 that he’ll be next to leave the competition.

Alex Apati, a spokesperson for the bookmakers, says: “It looks like it could finally be curtains for Greg, who is clear favourite for the boot tomorrow night.”

Meanwhile, the bookies have soap star Rose Ayling-Ellis with the best odds to win the competition at 7/4.

Alex said: “The odds suggest it’ll be a two-horse race between Rose and John for this year’s Glitterball Trophy, although we wouldn’t be surprised to see Rhys’ odds slashed from 14/1 if he puts in another impressive performance this weekend.”

The news that the bookies predict Greg will exit the competition next, comes amid rumours of a feud between him and his dance partner Karen.

Some eagle-eyed fans have recently noticed a change between the pair, with some suspecting they aren’t getting along.

The suspicions arose after the duo were recently interviewed on Strictly spin-off show It Takes Two.

@Zoetnet agreed: “#Strictly @karen_hauer and Greg on #ItTakesTwo very negative body language. She doesn’t like him…”

“#ItTakesTwo can Greg and Karen sit any further apart?? No other couples sit miles apart. This is a very strange relationship,” @MJ_JJ061215 added.

Karen and Greg will be taking on an upbeat challenge this week as they dance the Samba to the Spanish pop hit Macarena.

But, will the energetic dance be enough to keep them in the competition? Viewers will have to tune in to find out.

Strictly Come Dancing continues Saturday at 7pm on BBC One.