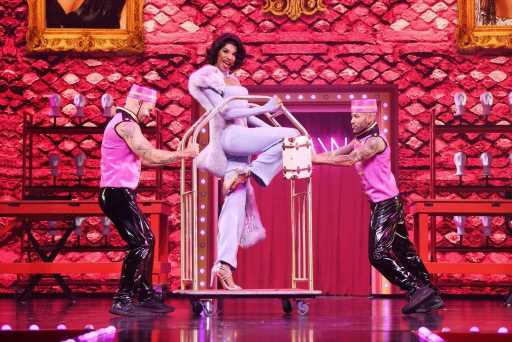 The “Shallow” singer, Lady Gaga, acted as a guest judge during RuPaul’s Drag Race season 9, leaving a lasting impression on contestants like Sasha Velour and Peppermint.

This artist also had several songs appear as lip-syncs throughout the reality competition series, including “Bad Romance” and “The Edge of Glory.” Here are some of the Lady Gaga songs performed by the contestants.

The Grammy and Oscar Award-winning musician, Lady Gaga, is known for her activism, often acting as an advocate for the LGBTQ community. As a result, several songs released by this celebrity were used for lip-syncs during RuPaul’s Drag Race.

During season 3 of the reality competition series, Delta Work and Phoenix lipsynced for their lives to “Bad Romance.”

According to RuPaul’s Drag Race Fandom, Lady Gaga’s ‘Born This Way’ was used for Milan and Jiggly Caliente’s lip-sync in season 4, as well as Meannie Minaj and Morrigan’s lip-sync in Drag Race Thailand season 1.

During the finale of season 11, Brooke Lynn Hytes and Yvie Oddly lip-synced “for the crown” to “The Edge of Glory.”

Several celebrities, including Ariana Grande, Demi Lovato, Nicki Minaj appeared as guest judges on RuPaul’s Drag Race. For the season 9 premiere, Lady Gaga acted as a guest judge. She even surprised the queens by entering the Werk Room as a contestant.

It wasn’t long before they figured out that she was the real Lady Gaga and not just an impersonator. In honor of the guest, the queens dressed in some of their favorite Lady Gaga outfits for the runway.

This was one of the few episodes in this reality series where the contestants did not lip-sync for their lives. No one was eliminated during the premiere, meaning there was no Lady Gaga song showcased during this episode.

“When she came back into the [Werk] Room, she really came back with some constructive feedback and criticism, but that was preceded by a nice, pretty good conversation,” Peppermint said.

“A very honest conversation about what it’s like to be a queen and how she identifies with us and how closely she feels connected to us, and that was something I didn’t expect,” she continued. Complete seasons of RuPaul’s Drag Race are available on streaming platforms like Paramount+ and Hulu.