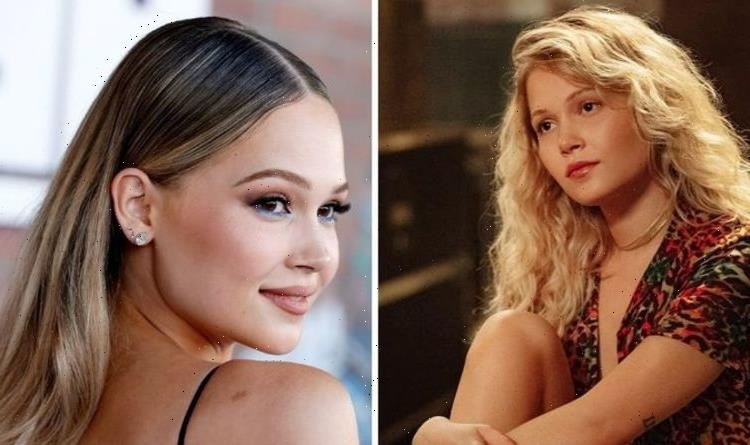 The brand new Starz drama starring Vikings’ Alexander Ludwig and Arrow’s Stephen Amell is finally premiering this Sunday. A second season of one of the most anticipated series of 2021 is almost inevitable, and Kelli Berglund has said she’s keen to come back for another round of Heels when she spoke about her new role with Express.co.uk.

Kelli Berglund is eager to reprise her role as Crystal Tyler in a potential second season of the new Starz drama, Heels.

The former Disney Channel star portrays a wrestling valet with dreams of making it into the ring in the acclaimed new series.

For now, though, Crystal has to be content with managing things behind the scenes, as well as supporting her hot-headed wrestler boyfriend, Ace Spade (played by Alexander Ludwig).

This Sunday’s season premiere has already generated considerable buzz, and Starz will be keeping an eye on the show’s ratings over the coming weeks.

Although a decision has not yet been made, Kelli Berglund threw her hat in the ring when she spoke to Express.co.uk about a potential follow-up.

“I fully see this show going beyond just these eight episodes. I think there’s lots of storylines that can expand very far, and become very interesting.”

Home of major hits like Power and Outlander, Starz could be about to add another massively popular series to its impressive repertoire.

Heels kicks off when wrestling brothers Jack and Ace Spade’s long-standing feud bubbles to the surface in a painful grudge match.

One a likable ‘face’ and the other a villainous ‘heel’, the brothers play out scripted fights that start to feel all too real in the wake of a family tragedy.

Set against the backdrop of small town Georgia, Berglund suggested there is still plenty more to mine from creator Michael Waldron’s original pitch.

She continued: “I think there’s a lot we still, by episode eight, want to learn about some of these characters’ backstories.”

Beyond Jack and Ace Spade, Heels features an extensive cast of colourful characters both in and outside of the ring.

By the end of the first eight episodes, viewers will have already picked their favourites and will be desperate to find out more.

Berglund also hinted at some major cliffhangers and loose ends coming their way by the end of the first season.

She teased: “I, of course, won’t tell you what happens in the final episode, but I think a lot of people will want to know ‘what now?’”

“Because there’s a pretty important storyline that gets really exciting. And people are going to want it to keep going.”

“I mean, I want it to keep going,” Berglund added. “So, fingers crossed!”

Heels has already received overwhelmingly positive reviews across the board, so hopefully Berglund and the rest of the cast won’t have to keep their fingers crossed for much longer.

Heels premieres on Sunday, August 15 on Starz in the US and on STARZPLAY in the UK.