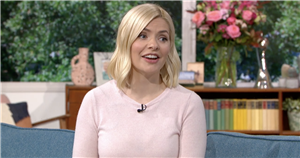 Holly Willoughby has admitted she was scared of "looking stupid" when she first became host of This Morning in 2009.

The 40 year old replaced Fern Britton as Phillip Schofield's co-host on the hit ITV daytime show 12 years ago, but has now revealed she was too scared to ask "important" questions to guests when she first joined.

Blonde beauty Holly says she felt more at home contributing to the cooking and fashion segments of the show than sitting down for big interviews alongside Phillip, 59.

She opened up ahead of this weekend's Bafta Awards, where This Morning is nominated in the newly created Daytime TV category.

She told the Mirror: "When I started, I was terrified. I only ever felt comfortable in cookery and fashion – I was so scared of asking important questions for fear of looking stupid.

"I was quite young and I think some people were questioning whether I was the right person for the job. Luckily, Phil believed in me from the get-go."

It was reported last month that Holly was uncertain about her future on This Morning and allegedly held secret crisis talks with ITV.

Holly has been embroiled in a battle with her former agents YMU Group as they reportedly want to continue receiving a cut in her commission despite the fact they no longer represent her.

It was said that the presenter's former management company were demanding £200,000 a year and she was preparing to go to court over their "extortionate" demands.

A source told The Sun: "This is not about the money, it's the principle of the thing. There has never been any question over commission on contracts that they concluded – this is about what happens moving forwards now that they aren't involved, and them trying to handcuff her for years to come. It's just not right.

"Holly left YMU to set up her own and to take back control of her own future. She loves This Morning, and really doesn't want to leave. She is committed to the show, but has been given no choice but to discuss her options moving forward."

It has since been suggested that Holly could receive a pay rise from ITV if the situation reaches a crisis level.

A separate source told The Sun: "Holly's YMU row sparked some serious worries at ITV as they know how adamant she is that she shouldn't have to pay them.

"They are hoping the situation can be amicably resolved. But they have agreed a last-resort plan to up her salary if it was to reach crisis level.

"They have not yet had a conversation with Holly about this and she'd never dream of asking for a raise.

"But they know how popular she is and they can ill-afford to lose her, especially when Susanna [Reid]'s future is uncertain."