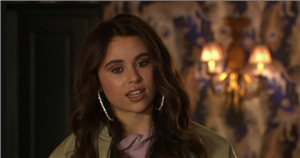 The McQueens were delighted to have Mercedes back as she returned following her stay in a psychiatric hospital.

The Dog pub landlady soon broke the news that kidnapping Diane Hutchinson (Alex Fletcher)’s baby has made her not want to have another child anymore.

Cher gets back to her meddling ways and encourages Tony Hutchinson (Nick Pickard) to go and see Mercedes, knowing it will overwhelm her.

Tony told her old friend Mercedes that he doesn’t blame her, as he knew she wasn’t in the right frame of mind when she took Eva.

However, Mercedes struggled to listen to such a thing and retreated to the flat upstairs, where she accessed her mobile phone for the first time since the kidnapping.

Amid all the messages of support, she found a video she recorded on the day of the incident, and she was quick to notice that, in spite of the clip having been filmed at the time of Eva’s disappearance, there was no sign of the child.

Another added: "Finally! Getting closer to exposing Cher."

A third person posted: "Mercedes is on to Cher finally."

Fans of the Channel 4 soap will know that Cher was really responsible for the crime, after she abducted Eva and placed her beside a drunk Mercedes in order to frame her stepmum.

The young woman has been desperate to drive a wedge between Mercedes and Sylver, and her plan did the trick, as Mercedes subsequently decided to get the help she thought she needed.

"I didn’t black out because of some kind of breakdown,’ Mercedes said to Nana (Diane Langton) while watching the video.

"I passed out because I was steaming drunk. Nana, I didn’t take that baby."

Mercedes may have pieced together what really happened on the day of the abduction, but one piece of the puzzle remains missing, so really stole baby Eva?

Will Mercedes work out Cher was responsible and frame her for the crime?

Hollyoaks airs weekdays on Channel 4 at 6.30pm followed by first look episodes on E4 at 7pm