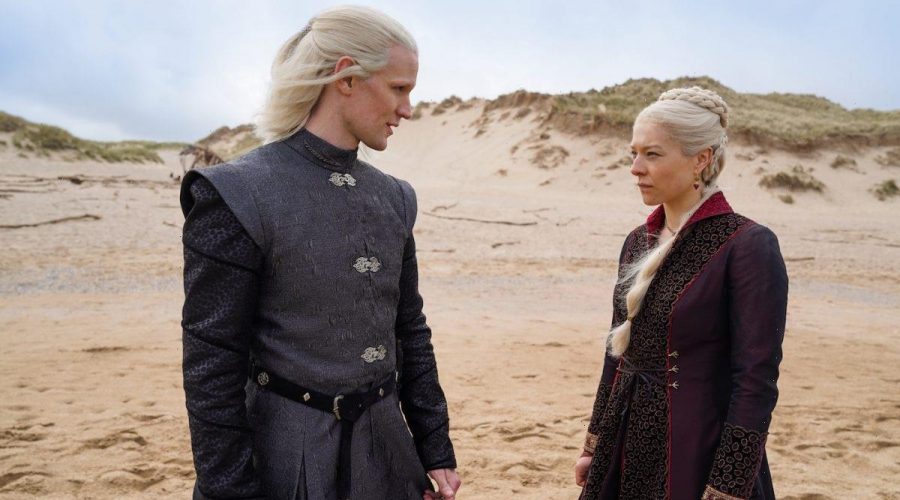 In 2019, HBO purchased 10 episodes of a Game of Thrones spinoff series titled House of the Dragon. The show is based on the novel Fire and Blood by George R. R. Martin. He’s also responsible for the novel on which Game of Thrones was based. With the recent drop of a teaser trailer from HBO, let’s take a look at one of the characters at the center of this new story.

Who is Rhaenyra Targaryen?

You’re probably familiar with those scenes in detective movies where the detectives have several photos pinned to a corkboard with red string tying them to one piece of paper or another. Usually, the yarn is so entangled it’s hard to figure out what exactly we’re looking at. That’s pretty close to how you’ll feel when trying to figure out the bloodlines of any character in Martin’s fantasy series. But that’s ok! We’re here to help, hopefully.

Rhaenyra Targaryen was the only surviving child of King Viserys I from his first wife. Because she was his only surviving child, he designated her as the successor to his throne. However, he went on to remarry and have several sons with his second wife. Viserys was still adamant that Rhaenyra would be the one to take the throne after he died.

As these things usually go, one of Rhaenyra’s younger half-brothers, Aegon, challenged her claim to the throne. Despite her having experience in the area, Aegon went ahead and had himself crowned king. Those that weren’t particular fans of Rhaenyra rallied to his side. The show will follow the civil war that ensues between the family members.

It looks like House of the Dragon won’t disappoint fans of the dragons in Game of Thrones. Rhaenyra is known as a “dragonrider,” so we’ll hopefully get to see her in action.

Who will play the role of Rhaenyra Targaryen in ‘House of the Dragon?’

Casting for House of the Dragon happened in July 2020, and Emma D’arcy won the role of Rhaenyra Targaryen. Born in London in 1992, D’Arcy has a few acting credits on her resume. She played the part of Naomi Richards in the TV series Wanderlust in 2018, as well as the role of Astrid in the horror-comedy series called Truth Seekers.

When and where will ‘House of the Dragon’ premiere?

No specific release date has been set for the premiere season of the Game of Thrones spinoff series, but we do know that the series will be released at some point in 2022. Filming began in April of 2021 but recently took a break due to a positive coronavirus (COVID-19) test. However, it doesn’t seem to have messed with the filming schedule too much.

The series, which will have 10 episodes, will air exclusively on HBO, just as its predecessor, Game of Thrones. HBO’s streaming platform, HBO Max, will also stream the series to subscribers to that platform.

06/10/2021 TV & Movies Comments Off on 'House of the Dragon': Who Plays Rhaenyra Targaryen? Everything to Know About the Character
Lifestyle