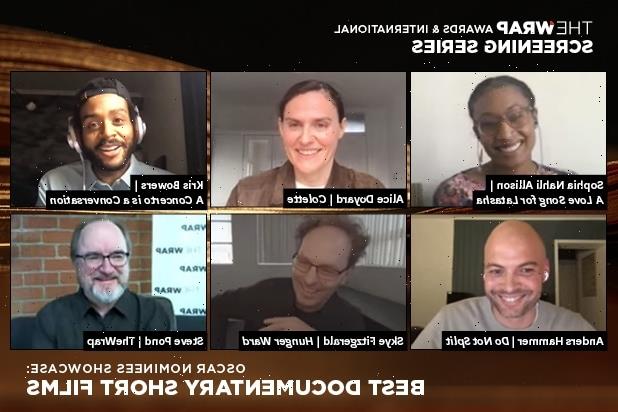 TheWrap Awards Screening Series: WWII veterans, American racism and Yemen’s famine are among the subjects of this year’s field

TheWrap has continued its annual tradition of showcasing the Oscar nominees for Best Documentary Short, gathering the filmmakers behind them to discuss how they brought their stories of injustice past and present to the screen.

Doyard, alongside “Colette” director Anthony Giacchino, took a great deal of time gaining the trust of the film’s subject, Colette Marin-Catherine, one of the last remaining veterans of the French Resistance. The film follows the 90-year-old Colette as she travels with teenage student Lucie Fouble for the first time to the ruins of Mittelbau-Dora concentration camp, where her brother was imprisoned as a Resistance member and was worked to death in dark tunnels building V1 missiles for the Nazis. The deeply emotional film shows Colette’s wit and thoughtfulness as well as her anger and tears as her grief returns to the surface after lying dormant for decades.

“There was this necessary discussion for Colette that we had for six months about what it would mean for her to go back and whether she even wanted to go,” Doyard said. “I really have to credit Anthony and the other producers for really building trust with Colette, because she knew that if she wanted to say ‘stop,’ which she does in the film, then we would stop the camera. She felt that she was in a secure environment.”

Sophia Nahli Allison had to show similar sensitivity when making “A Love Song for Latasha,” a Netflix short recounting the life of Latasha Harlins, who was shot by a Korean store owner over a bottle of orange juice in 1991. The store owner was convicted but avoided jail time, making Harlins’ death one of the factors behind the 1992 Los Angeles riots.

The short has been critically acclaimed for its dream-like approach to depicting Harlins’ life and death, using family pictures, sun-soaked shots of Latasha’s neighborhood in the present day, and abstract animation instead of footage of interviews and the shooting. Along with making the film artistically unique when there was little video of Harlins, Allison said it was her way of showing compassion for her family by turning the experience of making the documentary into one of healing.

“The hardest part was getting to the point when we discuss Latasha’s death, knowing that we didn’t want to include footage of the shooting because of the trauma it inflicted on that community,” Allison said. “I’m really grateful with the conversation we had with our animator Buki Bodunrin about ways we can explore other tactics to retell this story that would compliment [Latasha’s best friend] Ty’s voice but not have any elements that would trigger trauma in the community.”

Kris Bowers also wanted to make a documentary celebrating Black life and culture, but his struck much closer to home. His documentary “A Concerto Is A Conversation,” is based around a chat between him and his grandfather, Horace Bowers Sr., who spent what little money he had to travel from the Jim Crow South to Los Angeles, where he got a job at a laundromat that decades later he would come to own.

Bowers cites his grandfather as key to his success as a composer in a classical music scene that is still predominantly white, also reflecting in his doc on his own career which included a world premiere of one of his concertos at the Walt Disney Concert Hall and a trip to the Oscars two years ago as composer for the Best Picture-winning “Green Book.”

“That conversation happened so naturally because…my grandparents’ house was always a place for me to express myself in such vulnerable moments, and it wasn’t until after we shot it that I was starting to reflect on the things I was asking in that moment,” Bowers said. “It was a little hard to let go of how my family was being presented or how I was being presented.”

“A Concerto Is A Conversation” finished filming right before the COVID-19 pandemic arrived in the United States, but it had arrived several months earlier in Hong Kong, the setting of Andres Hammer’s “Do Not Split.” The intense documentary captures the historic democracy protests in Hong Kong in 2019 as they happened, filmed with the help of student demonstrators as they took to the streets amidst tear gas and mass arrests by Chinese police. Ultimately, it was the virus, not China, that forced the resistance into their homes, as the documentary ends on an uncertain note with protest organizers figuring out what their next move will be when the pandemic subsides.

“On a physical and a personal level, there were all these constant challenges and this incredible intensity, and I could feel it even though I wasn’t taking the same risks as the protesters around me,” he said. “I had to capture that intensity and make it feel as real as possible to the viewers, which is a challenge because it isn’t always possible to mirror that sense of danger and risk happening in these protests.”

But the most harrowing of the documentaries is undoubtedly Skye Fitzgerald’s “Hunger Ward,” which shows the human toll of the famine caused by Saudi Arabia’s war on Yemen and the Houthi rebels fighting the Saudi-backed government. Released on Paramount+, the film follows the work of the women who work as doctors and nurses in Yemen’s overwhelmed hunger ward treating severely malnourished children.

While some of the children in the documentary show signs of recovery, others do not survive. The documentary ends with a plea for viewers to demand political action; and while President Joe Biden promised in February to cut off U.S. support of the Saudi war efforts, which has included supplying weapons and intelligence during the Obama and Trump Administrations, requests from Congress for further details have so far been unanswered by the White House.

“There’s a researcher at the University of Oregon who wrote about something called ‘psychic fatigue‘…which is about how when numbers become so huge on something, we become numb to them,” Fitzgerald said. “And I think film is something that can pierce that; because when we tell a story about anything, whether it’s about your grandfather or a Black girl who is shot or any of our documentaries, it cuts through that noise in a very particular way…and that’s why I think the singular nature of our art form is so critical.”

Watch the full interview with the Oscar nominees above.