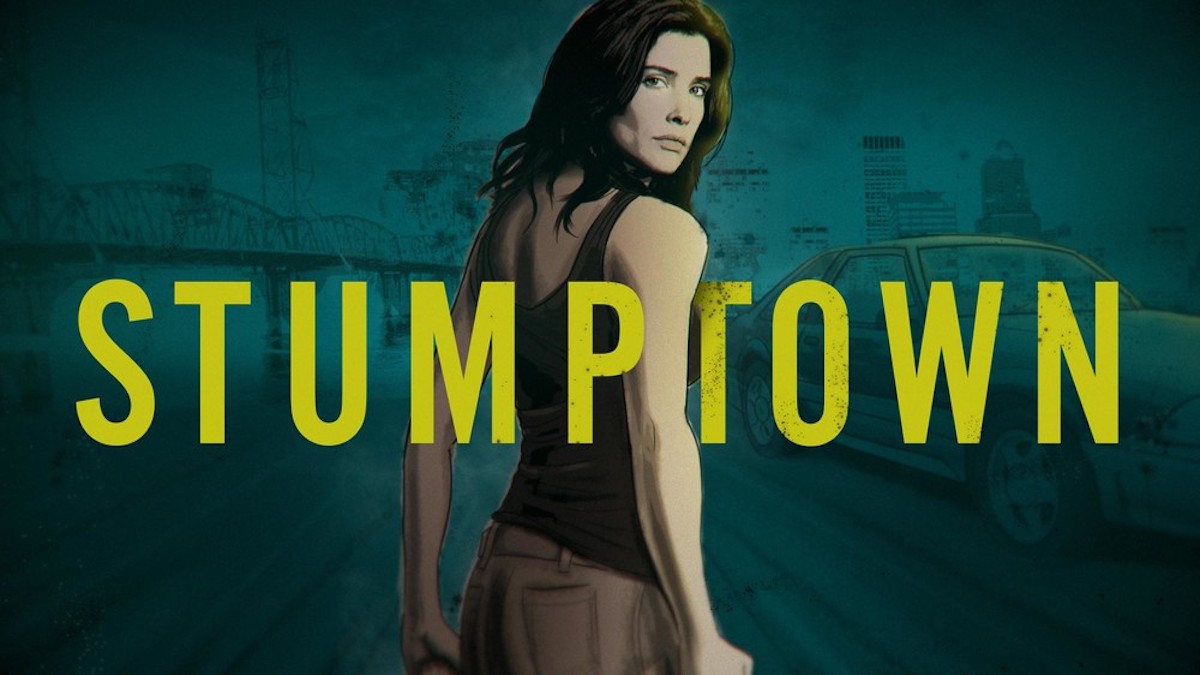 Walter White, Elaine Benes, and Nancy Botwin prove there is nothing better on television than a deeply-flawed character. And ABC is hoping they’ve discovered the next great one in Dex Parios, a Portland private investigator who has a list of bad qualities and personality traits to equal one hot mess.

Parios (Cobie Smulders) is the main character of Stumptown, premiering tonight on ABC and they dove into the world of independent crime comic books.

Stumptown is a graphic novel series that ran from 2009-2014, written by the prolific scribe Greg Rucka and rendered by Matthew Southworth and Justin Greenwood. Monsters and Critics spoke with the cast and crew of the television series after the pilot was shot, to see what’s been influenced by the comics in the pilot and going forward.

Parios holds every bad vice in the book, whether it’s being a bad gambler, an addict, and she’s battling PTSD. She owes the Confederated Tribes of the Wind Coast a hunk of cash in gambling debts but Sue-Lynn Blackbird (head of the Confederated Tribes, played by Tantoo Cardinal) will clear it if Dex can find her missing granddaughter.

Dex has her own tribe of support that includes her friends Grey McConnell (Jake Johnson) and Rookie (Adrian Martinez) and is also the main caretaker of her special needs younger brother Ansel (Cole Sibus). She uses the local police force for information and annoys Liuetenant Cosgrove (Camryn Manheim) and Detective Miles Hoffman (Michael Ealy) on a regular basis because she is often obtaining more information than they are.

She is a scrapper by every definition and the complex type of character that is a writer’s dream to bring to life, especially on network television. Dex Parios uses her intelligence, wit, keen perception, resourcefulness and other finer qualities to offset all the negative ones that keep her from getting ahead.

“I like playing messy players and ones that can’t really be described, that shift and change,” Smulders shared. (After How I Met Your Mother), “If I was going to do a series again, I wanted it to be with someone who is constantly changing and surprising even me. She’s very flawed, she is suffering from PTSD from the military and some major traumas.”

“She’s a guardian to her younger brother, which is something I don’t think she ever expected, she is sexually fluent, she’s an addict, she’s all sorts of things. As an actor, you’re able to play different things and not just hitting the same notes all the time.”

Although, Smulders does wish she would’ve had conversed with Rucka before shooting the pilot life moves fast sometimes, and three weeks after being chosen to portray Dex, they began filming.

“I was left on my own journey of reading the comics and doing my own research. I’ve played characters that have had a history with the military before, so I knew some things but I continue to do research because anytime you play someone in service, you want to do that right and pay it the respect it deserves.”

“Greg did a great job with these graphic novels. I was able to understand the characters so well. It’s one of the reasons I said yes because I could understand what this character was and the world she lived in so clearly. There was a strong safety net because of the comics.”

To her credit, Smulders did a terrific job as viewers will find out in the pilot. The series will eventually evolve into an ensemble, more so than the comics were, but Smulders commands the screen like Parios did in the panels of the comics and now that she has since knows Rucka and talks to him about Dex, she feels she is smarter about her character.

“Cobie is amazing in the pilot, but one thing that is undeniable, is how good she is,” said executive producer David Bernad. “Hopefully it showcases a female character that’s never been on television before and empowers others to feel better about their lives.”

Also talking to Rucka after meeting him for the first time at this past San Diego Comic-Con is Johnson who plays Grey McConnell.

“He said something interesting to me, that to go from comic book to series, you need to now invent stuff,” revealed Johnson. “So don’t go back to just live in (the comic), the idea is that you have to create, which was cool to hear from a comic book writer like Greg. What the (comics) medium is for is writing one great character, and everything else around them is supporting. But you can’t write five great comic book characters, it’s one great character.”

Certainly the test of any great ensemble is that growth from the original concept and being able to find the other entry points of interest. Because you have the time of an hour-long drama, those opportunities come fast and so the supporting cast members are eager to add to the world.

“Because it’s his voice, it’s his world, we exchanged information and as he gets scripts or watches episodes, I want Greg to just send me his conscious stream of thoughts about the character and if he sees something that could go in another direction, I want him in my ear.”

That kind of collaboration and understanding about the creators of the comics should be extremely comforting to fans of the comics, who in the past, often saw their favorite stories compromised for the worse in jumping mediums.

The production also used the art of Matt Southworth and Justin Greenwood, and Lee Loughridge’s colors for reference to capture the essence, the grit and his back alley portrayal of Portland. James Griffiths (Episodes) directed the pilot and Bernad said that he and their director of photography did a beautiful job in the framing the pilot, and added, “In the way it’s shot and the color palette, you can see inspiration from the original source material.”

“We definitely expanded on that because obviously it’s a different medium, but I think there’s a tonal and spiritual influence on the show from the comics.”

So yes, comics and television are different mediums. There’s an art to both, which are different but similar in that both need strong visuals to drive the energy of the story but everything is held together by an equally important and tight script. So while they’re different, their similarities make for a better chance of success.

“You can’t take the comics and make them straight into TV,” Rucka warns. “But what you can do is take the comics and figure out what works in the series and how does that work in a visually-driven, serial medium. So you can take Sue Lynn Blackbird pretty much whole, but Tookie doesn’t exist in the comics, because you don’t need him in the comics.”

“But you absolutely need him in the series. The series provides all the DNA for him to be there. So when (writer/producer) Jason (Richman) says Dex needs this relationship, this friendship (with Tookie), he can put that on the page and it isn’t in a way a violation of the source material, but rather an appropriate extrapolation.”

Because it’s a series that’s based on three volumes of the comic book, there will be room to expand on story ideas that spoke out from the source material. As Rucka told Johnson, there’s an opportunity to create and invent new elements of the Stumptown world. Does that mean it can deviate from the rigid procedural structure? Perhaps one day, but probably not right away.

“It’s a serial show, so I think they’re trying to straighten the balance between case of the week and then being able to move away from that and let the show find its footing. That’s an ongoing thing. If we’re blessed enough to get into a second season, I suspect you’ll see a second season that’s a continued evolution what you see in the first.”