Frights of the Round Table was the name of the first eating Bushtucker Trial of the series during tonight’s episode and saw Beverley, Vernon and Jordan gorge on some rather gruesome goodies. However, Ant and Dec informed I’m A Celebrity…Get Me Out of Here! viewers that Coronation Street’s Beverly would only be given vegan dishes while Vernon and Jordan could munch away on everything from testicles to brains. However, when Beverley’s first dish came to the table, called Cheese Fruit Vomlette, some ITV viewers were left furious.

Beverley was faced with a piece of vomit fruit on her plate next to an accompanying omelette.

However, several I’m A Celebrity viewers pointed out Beverley wouldn’t be allowed to eat eggs or foods which have been in contact with egg as a vegan.

“Bev is vegan, so they serve something to her on an omelette? Erm? #imacelebrity,” fumed one fan on Twitter.

A second similarly queried: “Bev is vegan?? But she’s eating egg?? What??? #imaceleb.” 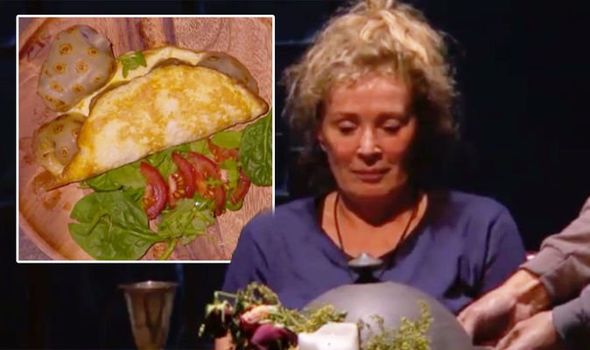 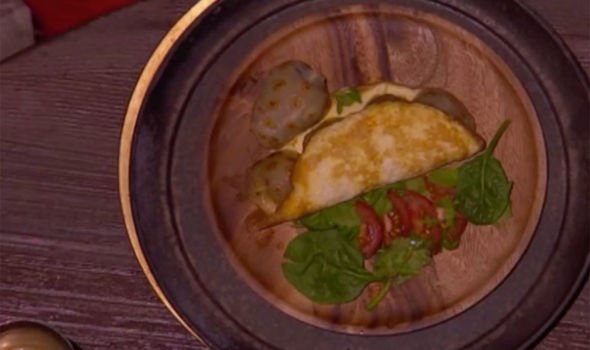 Another I’m A Celeb viewer vented: “I thought Bev was a vegan SHE GOT A DAMN OMELETTE ON THE PLATE #imacelebrity.”

“Beverley’s vegan but they put an omelette on her plate….die hard vegans would have refused to touch anything on that plate….#ImACeleb,” weighed in a fourth.

Express.co.uk has contacted ITV for comment regarding the trial. 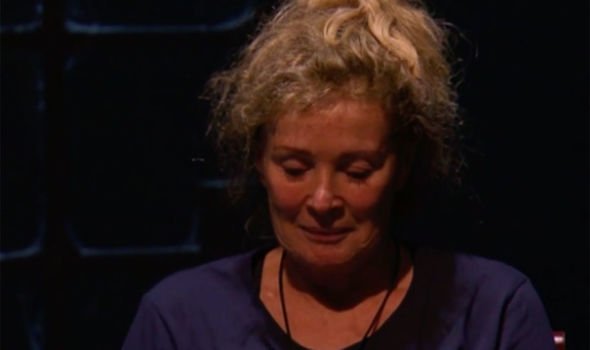 Beverley didn’t seem too bothered as she chowed down on the vomit fruit successfully.

“Oh my god it’s disgusting,” she said whilst she chewed as Vernon encouraged her to go to her happy place.

When Ant asked if this was Spain with her husband, Beverley joked: “Yes, but I’m not there yet.”

Dec said: “You’re in the departure lounge and it’s a delayed flight.”

Beverley had a number of other dishes to eat during her time in the task.

A Falaf Hell Wrap made up off fermented plums and a Dread and Butter Pudding of fermented tofu were her remaining dishes.

Vernon on the other hand was tasked with eating deer testicles and lamb’s brain amongst others.

While Jordan munched on sheep’s penis and cow’s tongue for two of his dishes.

And despite the gags and retching sounds, the trio managed to make it back to camp with all 10 stars.

However, the haul of stars wasn’t the biggest talking point from tonight’s episode.

Tomorrow will see Russell Watson and Ruthie Henshall join the line-up as two late arrivals to the camp.

But how will the two newbies fit in with the rest of the campmates?

I’m A Celebrity…Get Me Out Of Here! continues daily at 9pm on ITV.