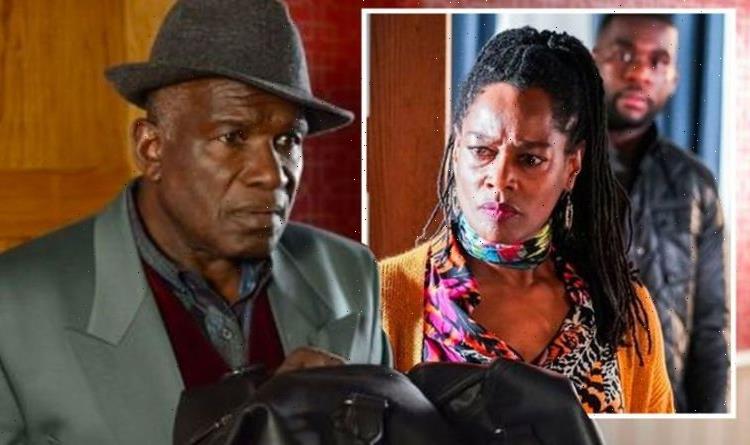 EastEnders: Isaac's mum tries to get him to leave with her

Patrick (played by Rudolph Walker) only discovered he was Isaac’s (Stevie Basula) father last year on EastEnders when his wife Sheree Trueman (Suzette Llewellyn) explained she had fell pregnant when they had a romance years ago. The father and son have face strain on their relationship recently when Isaac suffered a relapse of schizophrenia. With Sheree meddling in her husband and son’s lives, will she make sure they leave the BBC soap for good?

Earlier this year, it was revealed Isaac had schizophrenia when he started falling for love interest, Lola Pearce (Danielle Harold).

Feeling he didn’t need his medication, Isaac began to live his life without taking his tablets and it wasn’t long before he started to lose his grip on reality.

Isaac became obsessed with tracking down his brother Paul Trueman’s (Gary Beadle) killer and he was convinced it was Ruby Allen’s (Louise Lytton) father, Johnny Allen (Billy Murray), who arranged the murder.

Unfortunately, one thing led to another and the police were soon called to take Isaac to a psychiatric unit.

With the support of his girlfriend and family, Isaac has been able to work towards his recovery and returned home during Monday’s episode of the weeknight serial drama.

It was during these scenes Sheree revealed to her husband she and her son were going to take an extended holiday to Trinidad.

Unbeknown to Patrick, his wife had been planning the trip for some time as she was desperate to get Isaac away from Lola.

Sheree has done her best to manipulate both her son and his girlfriend into splitting up as she believes having a relationship triggers him to have a relapse.

She thought it best to get her son away from any temptation and for them to leave the country, starting a new life abroad instead.

The desperate mother was willing to leave her own husband in order to ensure she had Isaac all to herself.

However, with Patrick discovering what his wife had been up to in recent scenes, her plans were turned on their head.

With her son back home, he too told her he didn’t want to leave as he and Lola thought it was best to get him back into a normal routine.

Sheree looked crushed she couldn’t take her son away but this doesn’t necessarily mean the Trueman family still won’t leave if Sheree has her way.

In upcoming scenes, Isaac will try to turn over a new leaf as he is determined to get his job back at the local primary school.

Sheree was seen interfering once more during Tuesday’s episode as she rang the school to tell them to not reinstate her son as a teacher.

Later in the week, she will tell her son a lie as she explains the school do not want him back.

Patrik will have a change of heart as suggests Trinidad might just be the best place for his son and he is willing to leave with them.

Sheree is delighted her plan could be back on track but Isaac is the one standing in the way of them making their exit.

For now, there has been no official comment on when or if the trio are going to leave the show for pastures news.

In the past, there have been some shock exits without fans having prior knowledge so this could be a likely scenario in this situation.

This is the first big storyline Sheree and Isaac have featured in together since their secret was discovered so it could be a fitting conclusion to see them leave.

Although the actor who plays Patrick, Rudolph, has taken several breaks from filming in the past, he has always returned to set.

The last time the soap star took a hiatus from the show was during the midst of the coronavirus pandemic when older cast members were not allowed on set.

Patrick was reintroduced at Christmas and he has made regular appearances on the programme ever since, including playing a part in Lucas Johnson’s (Don Gilet) return.

The actress who plays Sheree, Suzette, and the actor who plays Isaac, Stevie, have not publicly discussed their futures on the show.

The length of contracts is also something the BBC tend not to disclose to the public or make a comment on.

If Isaac does decide to stay, his mother and father could still walk away so there is a possibility of at least one character making an exit from the show.

Following recent scenes, viewers took to Twitter to voice their anguish for Sheree to leave, with one writing: “How about you p**s off abroad Sheree and never come back #EastEnders.”

While others think there could be something else bubbling underneath the surface as a second posted: “#EastEnders post alert!

“Anyone else more than aware that Sheree is overly obsessed about her son and his condition with schizophrenia and there’s a touch of too close for comfort?! Is there going to be a storyline about a horrible past between Sheree and her beloved son?”

EastEnders continues tonight at 7:30pm on BBC One.