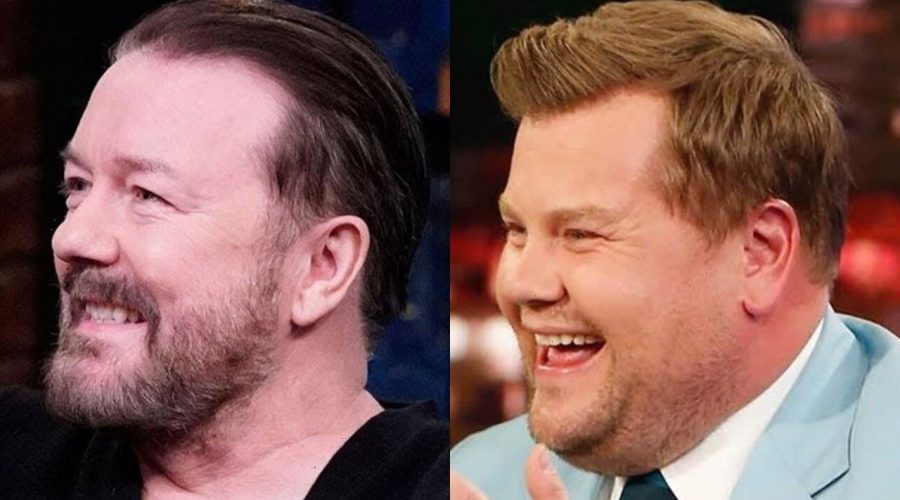 The CBS late-night host is sorry for copying Gervais’ joke while insisting he didn’t know the bit was previously used by ‘The Office’ creator on his stand-up special.

AceShowbiz –James Corden says sorry to Ricky Gervais after “inadvertently” using one of the comic’s jokes practically word-for-word on his “The Late Late Show”. The apology was issued by the TV host after Ricky, 61, tweeted a clip from James’ show on Halloween night when he repeated a joke from his 2018 Netflix stand-up special “Humanity“.

It was about people on Twitter getting mad about a poster in a town square offering guitar lessons to illustrate how people can get offended at harmless statements.

James, 44, tweeted on Tuesday, November 1, “Inadvertently told a brilliant Ricky Gervais joke on the show last night, obviously not knowing it came from him. It’s brilliant, because it’s a Ricky Gervais joke. You can watch all Ricky’s excellent specials on Netflix. J x.”

Ricky had retweeted a clip of Corden repeating his joke on “The Late Late Show” and said in a now-deleted tweet, “The bit about the town square advert for guitar lessons is brilliant.” The comic said he removed the message as he “started to feel sorry” for James.

James was talking about Elon Musk‘s $44 billion takeover of Twitter when he made the joke. He said, “That’s what I think when you see Elon Musk talk about Twitter – he says, ‘Well it’s the town square,’ but it isn’t.”

“Because if someone puts up a poster in a town square that says guitar lessons available, you don’t get people in the town square saying, ‘I don’t want to play the guitar! I want to play the piano, you piece of s***!’ Well that sign wasn’t for you, it was for somebody else – you don’t have to get mad about all of it.”

Ricky said in his joke about people taking offence to everything on Twitter, “They choose to read my tweet, and then take that personally. That’s like going into a town square, seeing a big notice board and there’s a notice – guitar lessons -and you go, ‘But I don’t want f****** guitar lessons.’ Fine, it’s not for you then, just walk away. Don’t worry about it.”

“The Late Late Show” has deleted the video of James making the joke from its Twitter page.

James has been mired in a row after he was branded a “tiny cretin” by the owner of Balthazar restaurant in New York for allegedly being extremely rude to staff during a mix-up over an egg omelette. The presenter said he was trying to protect his wife from a “serious” allergy to egg whites when he complained about their order.