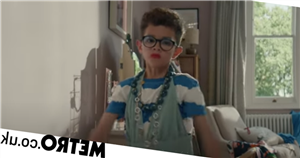 Retailer John Lewis has been forced to pull an advert featuring a young boy dancing in a dress after a watchdog branded it ‘potentially misleading’.

However, its removal had nothing to do with the uproar the ad caused, with many clutching their pearls at the mere sight of a young boy wearing a dress and make-up and merrily dancing around the house to Edge Of Seventeen (the AUDACITY), but instead was down to the damage depicted in the ad not actually being covered by the company’s insurance it was promoting.

Earlier this month nine-year-old Reggie Parker appeared in the home insurance advert for the high-end brand, dubbed ‘Let Life Happen’, where he was seen strutting around the house wearing make-up, jewellery, and heels and smearing paint on walls, coating the carpet in glitter and leaving many a household item ruined in his wake.

While the advert of the Stevie Nicks-loving boy in a dress was predictably accused of ‘agenda-pushing’ and sexism, and received many vile complaints and negative comments online, that wasn’t the reason it’s been taken down.

According to the company, the advert has been withdrawn after the Financial Conduct Authority deemed it ‘potentially misleading’ and would cause ‘confusion’ about the company’s home contents insurance offering.

A statement released on Wednesday on the John Lewis Twitter read: ‘You may have seen our ‘Let Life Happen’ advert for our new home contents insurance offering, which ran between 11 and 27 October 2021.

While many backed the ad in the face of criticism, we’ll never forget it was supported by the other star of the ad herself – Stevie Nicks, after the Fleetwood Mac legend shared the ad on Twitter and wrote: ‘Love this! #EdgeOfSeventeen.’