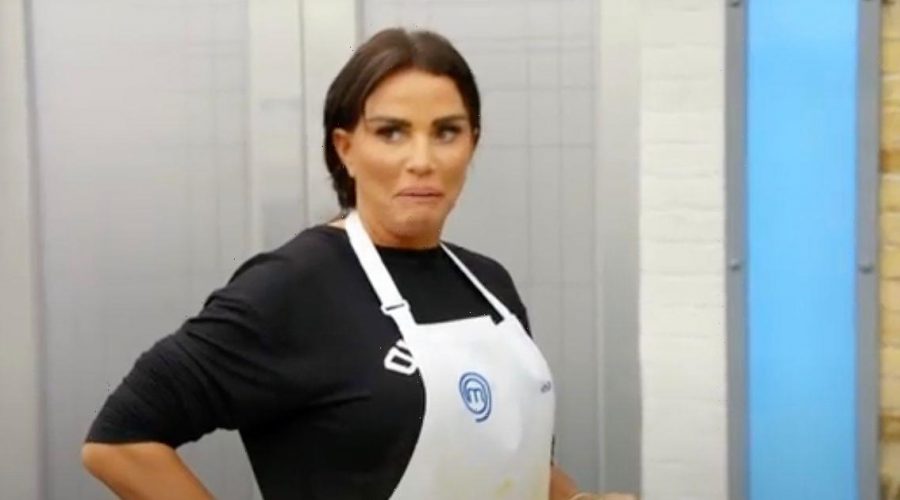 Celebrity Masterchef will be back with a bang this summer.

And Katie Price is certain to make the show entertaining, after a new trailer released on Sunday showed her seemingly creating chaos in the kitchen that left Gregg Wallace speechless.

The 43-year-old former glamour model was left looking sheepish as she glanced sideways at Gregg while holding a deep fat fryer in an apron covered in stains.

Whatever she had done to Gregg left him exasperated to the point that he closed his eyes and slapped himself on the head in despair.

The new trailer shows the celebrity lineup having a great time despite the stress of the show.

“I'm so excited,' declared actress Su Pollard, 71, while journalist Gavin Esler, 68, had his game face on as he focussed on his cooking.

Continuing with the chaotic theme, at one point judge John Torode looked aghast as he helped up one of the contestant’s dishes.

Alongside him is cyclist Kadeena Cox, seen struggling to work a food processor while laughing and footballer Dion Dublin, 52, is seen pulling a panicked expression to the camera.

Despite the predictable mishaps, the other celebs look raring to go, with Rita Simmons, 44, letting out a whoop as she applauds.

TOWIE star Megan McKenna, 28, told the camera: “I'm actually buzzing,” as she grinned away while actress Michelle Collins joined her in beaming and model Penny Lancaster let loose a cheer and a fist pump.

EastEnders actor Joe Swash, 39, appeared to be undertaking a grilling over his dish from Gregg and John.

“Are you disappointed by my dumplings?” he questioned Gregg who simply replied 'seven!' in the style of Strictly Come Dancing's Len Goodman, and causing Strictly’S Johannes Radebe to hide his face in behind his hand.

Love Island’s Kem Cetinay, 25, also looks to be having a tough time as he gripped his head and groaned, while Coronation Street's Melissa Johns, 31, was the picture of terror as she knelt by her oven with a panicked look on her face.

Fashion designer Patrick Grant, 49, however, was as cool as ever, effortlessly flipping his food out onto the plate.

Finally comedian Munya Chawawa, 28, got in a perfect pun as he quipped “There’s a lot at stake here” while gazing at the steaks he’d prepared.

Earlier this year Katie hinted that she had won the series before it had even aired.

She told OK! magazine: “I'm not allowed to let any secrets out but, put it this way, I do better than just OK!”

A source previously told The Sun: “Katie’s really excited for people to see a different side to her – she’s actually a really good cook, and wants to show off her kitchen skills.'

“She won’t crumble under the pressure of cooking for Gregg Wallace and John Torode, because she has to cook for five fussy kids every night!”

Celebrity MasterChef will return to BBC One this summer.

Get the latest updates on all the things Hollywood, TV and showbiz by signing up to the Daily Star showbiz newsletter.