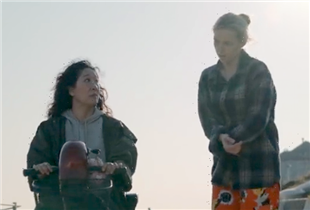 Killing Eve‘s cat and mouse are on the move — but where are they headed?

We finally have our first glimpse at the fourth and final season of the BBC America thriller, thanks to a new teaser the network released on Tuesday. “Glimpse” is probably the right word, too, because the teaser is mostly clips from previous seasons, with Eve asking, “Do you ever think what might have happened if we hadn’t done what we did?” Plus, Carolyn has an ominous warning: “People like us aren’t made for happy lives with happy endings.” Uh-oh… that doesn’t bode well for anyone on this show.

We also see a flurry of images that ends with Carolyn spitting at someone. (How uncouth.) But the teaser ends with a new scene of Eve and Villanelle on a seaside boardwalk together, with Eve riding a scooter. “Want a ride?” she asks Villanelle, and the teaser ends with Villanelle riding the scooter alone. Hmmm… was that just a fantasy? After all, she and Eve agreed to go their separate ways in the Season 3 finale.

We’ll find out when Season 4 premieres on Sunday, Feb. 27 at 8/7c. Press PLAY below for a quick glimpse of what’s to come, and hit the comments to share your first impressions.