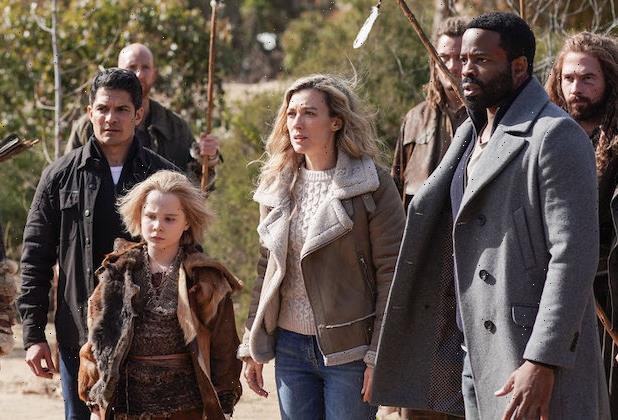 This week on NBC’s La Brea, we learned about another sinkhole and the war that ensued in 10,000 B.C., all building to perhaps the show’s most bananapants reveal yet!

IN THE LAND DOWN UNDER….

In the course of collecting themselves after the flash winter storm, the survivors finally realize that they need to start planning for long-term survival, and no mini greenhouse made out of car windshields is gonna cut it. Just then, Lily cries out from the woods, and Eve, Levi et al start chasing after what turns out to be Isaiah, the little blonde boy from the fort. The rugrat’s escape is cut short when he takes a digger and gashes the inside of his right wrist, which Sam quickly patches up. Eve, Levi and Ty then decide to drive the lad back to the fort, and then reach out to his community for ProTips on primeval survival.

The reception they get is at first contentious, until Paara shows up and does right by (her total crush) Ty and his friends. She shows them how they tend to a robust garden, and when pressed, explains how “sky people” at one point came to be the enemy of heer people. Sixty years ago, she says, a sinkhole formed in the ocean and a passenger ship “fell” through. Its survivors chose not to make peace with the locals but go to war. Following years of conflict, those who remained found common ground and agreed to live among each other in peace, sharing cultures and languages.

After a communal lunch, Isaiah offers to show Eve the nearby lake, where he shares that his parents died he was young(er), and that he and his Grandpa only arrived a few years ago. That squashes Eve’s assumption that the elder arrived on the passenger ship, but Isaiah says he is “not allowed” to discuss the matter.

While Eve is with Isaiah, Levi does some snooping and finds evidence seemingly proving that “grandpa” killed Eddie — the deceased’s wallet. Grandpa, when confronted in front of Eve and Paara, insists that Eddie was dead when he found him, and he took the wallet to get info on the newcomers. Whatever the case, Paara declares the nascent trust between the groups broken, and sends Ty & Co. packing. 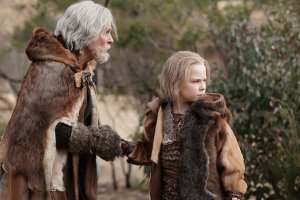 But just then, the village gets word that a strange woman has taken Isaiah! Paara agrees to let Ty and the others join in the hunt, but it’s grandpa who first catches up to Isaiah and his kidnapper — Rebecca Aldridge! And grandpa knows her! “You know how important he is,” Rebecca says of the lad, but Grandpa won’t budge.He whips out a knife and a skirmish takes places off-screen, leaving Rebecca stabbed and bleeding.

Despite Paara’s best efforts, Rebecca’s wounds are grave, and with what may be her last breaths she informs Eve in private that Isaiah “is special, there’s something he has to do…. What’s important is that you find Isaiah.” When Eve asks why her, Rebecca realizes, “You have no idea who he is, do you?”

More on that below!

Elsewhere down under, we learned that Sam has had PTS since his service in Afghanistan and as a result has been on anti-anxiety meds for years — and he has just one tablet left in h– oops, he dropped it into a grate! So he has none. As such, when Veronica was discovered lurking around camp, he demanded Marybeth’s handcuffs and cuffed Lily’s sister to the steering wheel of a random car. When Veronica had a panic attack and stopped breathing, Sam cooled down and saved her life — after which he told Riley about his PTS and meds. Also, Riley and Josh shared another kiss while on patrol — and amazingly, their momentary indiscretion didn’t come back to bite them/turn them into a sabre-toothed tiger’s lunch. 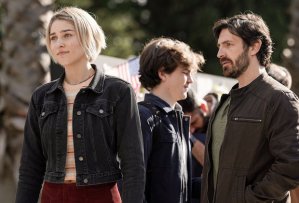 Gavin very, very badly tried to hide from Izzy that he is still conspiring with Sophia on how to rescue Eve, Josh et al. Later at school, Izzy met Andrew Velez — as in Riley’s brother — and he invited Izzy to a vigil for those who lost people to the sinkhole.

Gavin and Sophia returned to the art gallery run by Ella, the woman who as a young girl was with Gavin when he was found wandering on a road. Ella was MIA, but her associate said that the handprint sculpture was something Ella dove into six days ago. On their way out, Gavin and Sophia spotted Ella peeling away, so Sophia had her peeps run the plates. Learning that Izzy cut class, Gavin found his daughter at a beach that looks like no beach in Los Angeles, and he ‘fessed up that he is pursuing alternate courses of action. They then both attended the vigil/met up with Andrew, until Sophia called with an address for Ella — in Topanga Canyon, near where she and Gavin had been found in 1988.

Arriving at the property, Gavin and Sophia found what appeared to be a onetime sinkhole in the backyard. As Gavin nears it, he has a vision — not a third-person POV as usual, but from the eyes of Isaiah, as the tyke talked to his grandfather. Gavin thus realizes that he is from that 10,000 B.C. world, just as Eve in talking with Rebecca learns that Isaiah is a wee Gavin!

Want scoop on La Brea, or for any other show? Email [email protected] and your question may be answered via Matt’s Inside Line.