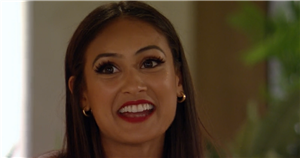 Love Island fans were left baffled on Monday's episode after Priya Gopaldas slammed Brett Staniland's cheese choice before they were dumped from the villa.

Talking to her fellow female Islanders, the medical student, 23, admitted that the PhD student, 27, gives her "the ick" with his "boring" cheese choice as one of the reasons.

Priya said that she wanted a man who enjoys "smellier" choices of cheese and was open to trying different varieties of the food.

She said: "I just feel like his energy is like below mine and it's quite draining, sucking the fun out of me. Just small things, like his favourite cheese.

Get exclusive Love Islandstories and fabulous updates straight to your inbox with OK!'s daily Factor 50 newsletter. You can sign up at the top of the page.

"I'm sure he said something like really boring, I don't know, like brie. I want someone to be like: 'I'll try all different kinds of cheese, the smellier the better!', that kind of thing.

"I feel like he's the kind of person who just sticks in his comfort zone."

And things went from bad to worse when Priya "friend zoned" him later on the show and Brett confessed that he doesn't even like cheese.

Priya said: "It's just small things, you know, on the date when I asked you what your favourite cheese was. I think you said brie?"

To which Brett fired back with: "No… I don't like brie, I hate brie. I don't really like cheese."

To which Brett pointed out: "You can have a cheeseboard and wine, I can have a coffee and biscuit."

Viewers were left both baffled and amused over Priya cooling off her romance with Brett over his cheese choice.

A different viewer quipped: "Looks like Priya and Brett were not meant to Brie #LoveIsland."

Another follower commented: "Priya breaking up with brett and giving the fact he doesn't like cheese as a reason is hilarious #loveIsland."

A different account put: "Priya’s dumping Brett because he doesn’t like the right type of cheese?? #LoveIsland," followed by a confused GIF.

While another show watcher added: "Priya… are you ok? cheese? huh? #LoveIsland."

Later on the show, Priya and Brett were dumped from the villa after they were voted "least compatible" by their fellow contestants and viewers.

For the latest Love Island gossip and spoilers, make sure to sign up to OK!'s daily celebrity newsletter and Factor 50 – your one stop for all the latest villa news.

Love Island continues nightly at 9pm on ITV2 and ITV Hub. Episodes are available the following morning on BritBox.