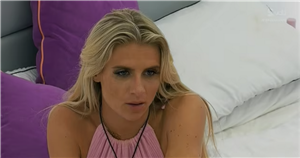 Love Island fans were left in hysterics on Friday's episode after Aaron Francis accidentally walked in on Toby Aromolaran and Chloe Burrows having a tense chat.

After Thursday night's explosive recoupling, Chloe, 25, was left in tears after the semi-professional football player, 22, picked new bombshell Abigail Rawlings, 27, over her.

During Friday's episode, Chloe refused to speak to Toby and was instead comforted by her close friends Hugo Hammond, who coupled up with her and laid into Toby, and Millie Court.

However, later on the show, the former couple decided to sit down in the bedroom as they had a chat about the recoupling and their past romance.

Get exclusive Love Island stories and fabulous updates straight to your inbox with OK!'s daily Factor 50 newsletter. You can sign up at the top of the page.

As Chloe listened to Toby’s reason behind his sudden change of heart, she told the sportsman that he had "no respect at all" after he dumped her for Abigail.

But as the conversation got heavy, Aaron, 24, who recently revealed his sweet 'Melita' tattoo, stumbled into the bedroom and apologised as he awkwardly interrupted their argument.

Love Island viewers were left in hysterics over the moment as they praised show editors for pausing the sad music which played in the background of their argument while Aaron swiftly exited the bedroom.

One person tweeted: “Ok no I'm sorry I've not rated the producers on this series but whoever decided to pause the music when Aaron walked in & carry on when he left needs a raise.”

A different fan joked: “Aaron omg lmaoooo nahhh WHO EDITED this? That was funny,” followed by laughing emojis.

Another show watcher commented: "Aaron walking in on Toby and Chloe AND THE DRAMATIC MUSIC JUST STOPS AND EVERYONES SILENT IM SCREAMING #LoveIsland."

While a different account added: "Why did the producers stop the sad music when Aaron walked into the room where Toby and Chloe were having a chat? They just made a ‘sad’ scene funny #LoveIsland."

After Aaron left, Chloe immediately launched into a painful rant as she slammed Toby for being so disrespectful.

She fumed: "What you have done was so out of order, no respect, you made me feel [holds up fingers] this big!"

Toby tried to explain his actions and reassured her that he had every intention of picking her during the recoupling but couldn't because his feelings for her had changed.

She responded: "I don't care what you think … you've got what you wanted! It's done, I don't want anything to do … you're just, you're awful!"

For all your juicy updates on all things Love Island, sign up to our Factor 50 newsletter.

Love Island continues on Sunday night at 9pm on ITV2 and ITV Hub. Episodes are available the following morning on BritBox.