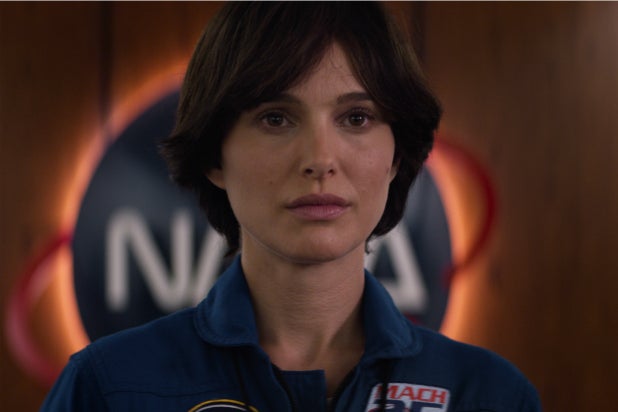 After “Ad Astra” and now “Lucy in the Sky,” there should probably be some kind of psychological study done on astronauts who trek to outer space only to find they can no longer function among other human beings when they return to Earth.

While the former film strives to understand its protagonist, the latter, the latest from director Noah Hawley (creator of TV’s “Fargo” and “Legion”), portrays its lead character as an “erratic,” “spiraling” woman whose rapid descent into madness is somehow connected with her deep-rooted feminism. The results are, as you might expect, negative.

Astronaut Lucy Cola (Natalie Portman) has just returned home after a particularly remarkable trip to space where she, as she puts it, was even able to spot her own house. To the credit of cinematographer Polly Morgan (“The Intervention”) and sound mixer Jaya Jayaraja, outer space looks and sounds both spectacular and disturbingly serene compared to the far more pedestrian suburbia on solid ground. Now that Lucy’s back, she can’t seem to find her footing.

Watch Video: Natalie Portman Gets Blasted Into Space in 'Lucy in the Sky' Teaser

She’s now turned off by her relentlessly pleasing husband, Drew (Dan Stevens), obsesses over her experience in space to the point where everything and everyone on Earth seems tedious, and falls in lust with her colleague Mark Goodwin (Jon Hamm). Lucy’s inability to reacclimate immediately to more familiar surroundings would have almost been understandable if it weren’t for everything else that is tacked on to that in the story.

Lucy’s a woman in a very male-dominated industry who earns the right to travel beyond the confines of Earth, so it makes sense that she can’t even articulate what she’s feeling. But while her colleagues, including those played by Tig Notaro and Jeffrey Donovan, recognize what she’s going through without her explaining it — including why her tongue even feels weird — the audience is completely at a loss.

That’s because screenwriters Brian C. Brown and Elliott DiGuiseppi, even with Hawley’s script revisions, seem to lack both empathy and understanding for Lucy, despite trying to equate her newly underwhelming outlook on life to her uncompromising drive to succeed in a man’s world that had been instilled in her from childhood. As Lucy repeatedly states throughout the film, her parents were useless, and she practically raised herself and her older brother, whose unreliability and unaccountability taught her that men are allowed to make messes and women are the ones who have to clean them up.

That hard lesson, not entirely untrue either in real life or in this film, contributed to her balls-to-the-wall work ethic and the personal ambition that is praised by her chain-smoking Nana (Ellen Burstyn). Lucy also passes these sentiments on to her niece, Blue Iris (Pearl Amanda Dickson, “Legion”), who she gets stuck taking care of when her brother disappears again.

But Brown and DiGuiseppi paint Lucy as a woman whose pent-up aggression toward men and eagerness to overcome her male workspace lead her to lash out at Mark, whom Drew appropriately describes as a “divorced action figure,” when he dumps her for their younger female colleague (Zazie Beetz). When Lucy is temporarily grounded and restricted from her much-anticipated mission, she flies even farther off the handle: All of a sudden, she’s sporting a disheveled blond wig, plotting a crime against Mark, and bringing Blue Iris down with her.

There is no real indication of how much time goes by from when Lucy lands back on Earth to this obvious emotional breakdown, which makes its impact that much more startling. Though Portman impressively commits to the normally macho and impossibly balanced Lucy becoming unhinged, the performance is ultimately empty, because Lucy’s distress is explained only in vague conversations with Mark that further reduce her feelings, everything from love to anger, as “not real.”

The writers — “inspired,” according to an opening disclaimer, by the saga of astronaut Lisa Nowak — struggle to point to a through-line between Lucy’s transcendent experience in space, her overcompensating work ethic in a masculine environment, her affair, and ultimately her meltdown. By the time the script introduces the idea that Lucy’s male colleagues may be gaslighting her, and that she may not actually be manic, the audience has already lost empathy for her. Hawley’s unwieldy tracking shots only exacerbate Lucy’s condition. Maybe she breaks down because she loses a coveted mission to a lesser experienced employee, or maybe “all that astronaut dick,” as Nana suggests, has made her soft. Or maybe she should actually seek professional help as she is advised to do.

Either way, the writers don’t bother to explore in a true way how any of those things intersect. “Lucy in the Sky” becomes a strange experience that tries to force too many themes together at the detriment of its otherwise fascinating heroine.