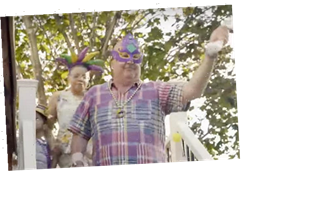 Looking for some comfort-food TV? Welp, we’ve got an exclusive sneak peek at the Andrew Zimmern-hosted “Family Dinner” series for Chip and Joanna Gaines’ Magnolia Network — and it doesn’t get any more feel good than this, folks.

In TheWrap’s preview of the series, which launches some episodes Friday on Discovery’s streaming service Discovery+ and will have its linear debut this summer on the Gaineses’ rebranded DIY Network, Zimmern joins the Brundidge family in New Orleans for a fun Cajun-style dinner.

But before they sit down to eat their fried catfish and remoulade sauce, Sheletta and Shawn Brundidge lead their four children — and Zimmern — in a parade through the family’s backyard, while Sheletta explains the history of New Orleans’ “second line” parades.

“‘Family Dinner’ is an important show in today’s America,” Zimmern told TheWrap. “Coming together over dinner has never been at a greater premium. We know we need more connection in our lives. Hopefully, we are coming out of the worst of the pandemic and while isolated in pods, so many of us haven’t been able to spend time with the people we love most. So we know what we are missing, and that love, that shared connectivity shows up on the screen in every episode.”

Watch the sneak-peek of the Magnolia series above.

Here’s the description for Episode 7 of “Family Dinner,” which features the Brundidges:

Sheletta and Shawn Brundidge grew up on southern cooking. They met in Houston, but fell in love in New Orleans. Fast-forward 14 years and four kids and the Brundidges have settled in Minnesota. Sheletta Brundidge’s motto is “Happiness is a Choice” and based on the positive energy this family exudes, they all make that choice every day. The fact that Sheletta is a comedian might help this family see the sunny side of life and build on the positive. Three of Sheletta and Shawn Brundidge’s four children are on the autism spectrum, but with targeted education and therapy they’re thriving and happy. 7-year-old daughter Cameron has tested off the spectrum and her older brother Brandon isn’t far behind. The youngest son Daniel was non-verbal until he suddenly began singing “Old Towne Road” last year and went viral. For Sheletta and Shawn, life is about building strong kids, strong family ties and laughing. Daily life is packed with work, school, therapy and activities and dinner time is their time to connect. Even though Shawn works a lot, he loves to cook and makes all the meals –everything from childhood staples to New Orleans classics that stir up beloved memories for Sheletta and Shawn who fell in love in the city. They use dinner time to make new memories with their kids– and with Shawn’s Dad who lives with the family.

A selection of “Family Dinner” episodes launch Friday on Discovery+. The show will have its linear debut on Chip and Joanna Gaines’ Magnolia network this summer.