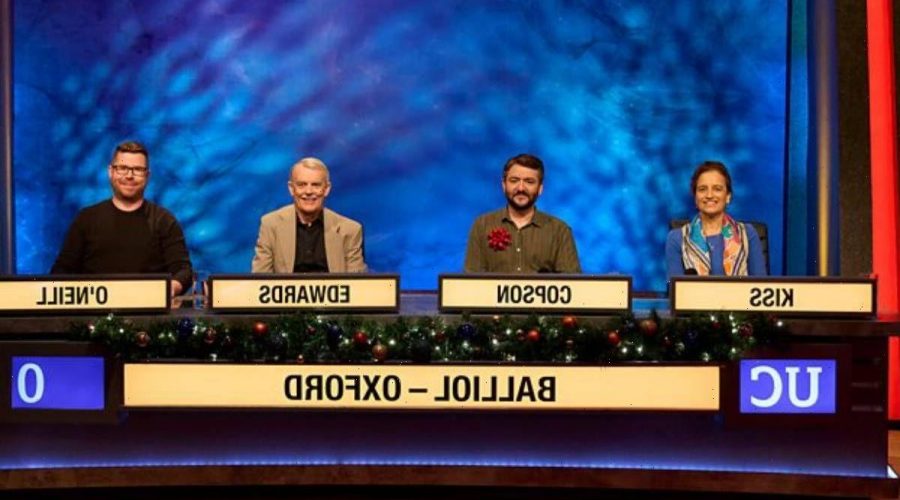 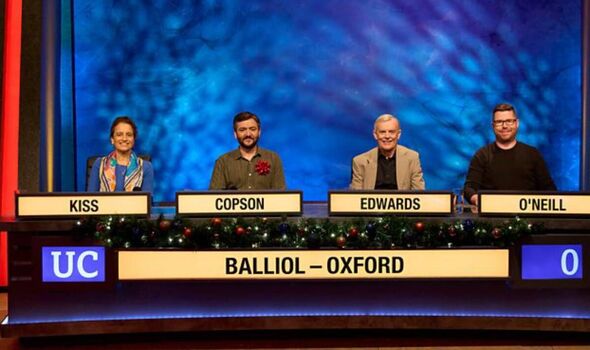 Tonight’s show is the final of Christmas University Challenge, in which graduates “old enough to know better”, in Paxo’s own words, take part in a seasonal version. The student series was recorded many months ago, though the later rounds haven’t yet been screened.

Tonight’s contest marked Jeremy’s actual farewell to the show. We’re all sworn to secrecy about the results, so you’ll need to watch to find out who won.

I’ve been a fan of University Challenge since I was a small boy with a love of quizzes. The show was first screened 60 years ago and soon I was hooked.

In those early days, Bamber Gascoigne, who died earlier this year aged 87, asked the questions. He was charming and obviously erudite. As a result, when I was young,
anyone who seemed “brainy” was likely to be nicknamed “Bamber”.

I dreamed of appearing on my favourite show long before beginning student life at Oxford in 1974. When my college, Balliol, was invited to take part, I sat the general knowledge test which was the method for selecting the team.

Alas, my ignorance about classical music let me down and I didn’t score enough points to make the cut. Bamber’s long reign as host came to an end in 1987 when University Challenge was axed.

To my delight, it was revived in 1994 with Jeremy as chief inquisitor. The show has continued ever since and it attracts some of BBC Two’s biggest audiences.

The British Film Institute included University Challenge as one of its “Hundred Greatest Television Programmes” and the BBC insists it remains “the most fiendish quiz on television”. The show’s cultural impact has been astonishing.

It has inspired spoofs, from Not The Nine O’Clock News and The Young Ones, as well as David Nicholls’ best-selling novel Starter For Ten.

The film adaptation of Nicholls’ book, starring James McAvoy, struck a chord with me. Like me, McAvoy’s character came from a state school background. He was even more obsessed with University Challenge than I am.

The show’s appeal is amazing even if, as a viewer, you struggle to figure out what a question means, let alone how to find the answer, it’s fascinating to watch smart people battling away for points under extreme pressure of time.

Continuity is part of University Challenge’s strength. The theme music is iconic and so is the old-fashioned split-screen technique for showing the two teams, fingers on buzzers, desperate to be first to a starter question.

Above all, the presenters are crucial.

Jeremy’s style is very different from Bamber’s. He’s spent a lifetime interrogating slippery politicians and is famous for standing no nonsense. It’s easy to believe that he could answer every question himself.

I’ve often wondered how nervous students cope when such a renowned and intimidating figure is firing questions at them. They must dread his withering put-downs.

Even the brilliant Eric Monkman of Wolfson College, Cambridge, who became a cult hero thanks to his intense manner and astonishing knowledge, felt the sharp end of Jeremy’s tongue in the 2017 final. He was told, when he buzzed in too soon, his answer was “completely useless”. Wolfson lost to Balliol.

As for myself, after leaving Balliol I qualified as a solicitor, but soon figured that, if I couldn’t get on to University Challenge, I should pursue my first love. Since I was a child, I’ve devoured detective fiction and I always longed to be a crime novelist.

I studied law because my parents wanted me to get a “proper job”, and I’ve enjoyed it. But I loved writing and becoming an author was my main ambition.

I finally managed to publish my first novel in 1991. Since then there have been 20 more, most recently Blackstone Fell.

I also write non-fiction and my history of mystery – The Life of Crime – has just been chosen as one of the New York Times’ Books of the Year. I’ve been lucky enough to be asked to talk about crime writing in places as far removed as Shanghai, Reykjavik, Honolulu, Dubai and even aboard the Queen Mary.

In many ways I’ve lived my dream. So I could scarcely complain that I’d missed out on taking part in my favourite quiz show.

But over the years I’ve remained a devotee, watching each week and admiring the brilliance of so many of the student participants. It’s one thing to shout out the answers when you’re sitting at home but very different when you’re in front of the cameras.

Despite myself, I often wondered what the experience was like.

Imagine the thrill when I received an email from the series producer asking if I would like to take part in Christmas University Challenge 2022.

I was asked because, in addition to my crime writing, I’ve been president of the Detection Club for the past seven years.

Founded in 1930, this is the world’s oldest social network for crime writers. Membership is restricted to about 60 leading authors, including luminaries like Ian Rankin and Ann Cleeves.

There have only been eight presidents and my predecessors include such great names as GK Chesterton, Dorothy L Sayers and Agatha Christie. It took barely a nanosecond for me to agree to take part in University Challenge.

The invitation was all the more special because I knew that this would be Jeremy’s swansong, having been diagnosed with Parkinson’s disease, quite incredibly, by a doctor who had noticed subtle symptoms while watching him host the show.

I was flattered to be asked to captain the Balliol team and, again, didn’t hesitate before saying yes.

Why worry about embarrassing yourself by displaying your ignorance on national telly when you get an opportunity you were sure had gone for good?

I didn’t know any of my teammates before we met. This was shortly before our first heat, against SOAS University of London.

Not for us the preparation and training that some student teams undertake. Luckily, my Balliol colleagues – Elizabeth Kiss, Andrew Copson and Martin O’Neill – proved good companions. However, we couldn’t claim to have a perfect blend of expert know-how.

Not one of us had any scientific training. Elizabeth and Martin are distinguished philosophers. Andrew studied history and is a prominent humanist. But I couldn’t have wished for better teammates.

The key to success in University Challenge lies in answering quickly and not wasting time. I felt that my job as captain was to give my colleagues confidence by encouraging everyone to buzz in early and not worry about incurring five-point penalties.

Each time we got an answer wrong, we should forget it and focus on the next question. We aimed to answer the bonus questions fast, so as not to test Jeremy’s patience!

The backroom team was kind towards all the contestants. Occasionally it’s suggested that the questions asked in Christmas University Challenge may be slightly easier than those that are usually fired.

It was made clear that there was no danger of that in Jeremy’s final series. He’s already said the questions for this year’s teams of “old codgers” were “as tricky as the ones we put to the students”.

I’ve rarely been as nervous as in the build-up to the three shows. When you hear the theme – known as “College Boy” – play and realise that you’re sitting in front of Jeremy and the cameras are recording, it’s impossible not to feel daunted.

I was so worried about pressing my buzzer prematurely that once or twice I didn’t press it hard enough!

These things happen in the heat of the moment.

Time whizzes by as questions come and go. Each half-hour show seems to be over in a flash. Did the experience live up to my expectations over the years? You bet!

Given that I’ve admired Jeremy for many years, it was a great thrill to meet him. He couldn’t have been more courteous, patiently waiting for us to take photos.

After the final, champagne flowed. Jeremy kindly invited the winners and runners-up to join him at a farewell party thrown for him by the production team.

He was kind enough to say writing my crime novels was a very good use of a law degree! A memorable and poignant occasion. I’m sure his successor, the BBC’s Amol Rajan, only the third host, will do a great job. He certainly has a tough act to follow.