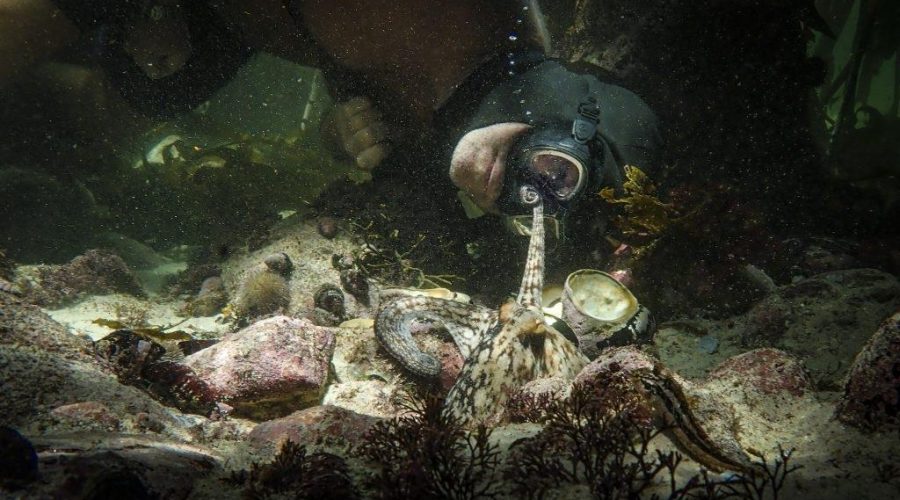 If you haven’t already caught Netflix’s Oscar-winning documentary My Octopus Teacher, don’t miss out on the opportunity to enjoy this truly unique look at the special relationship between a South African diver and his octopus muse and mentor. The story of Craig Foster’s daily ocean dives has attracted millions of viewers and critical acclaim and is one of the most popular full-length nature documentaries available on Netflix.

In the category of Best Feature Documentary, My Octopus Teacher was up against some steep competition, including Crip Camp, a film about disability activists produced by none other than Barack and Michelle Obama. But Foster’s documentary won out due in large part to the charms of its animal protagonist.

My Octopus Teacher is told from the point of view of Foster, a documentary filmmaker known for the 2000 film The Great Dance. As Time explains, one day Foster began a quest for mental peace by developing the daily habit of diving into the chilly waters off the Cape Town suburb of Simon’s Town. He began these dives as a result of the stresses he had experienced as a documentary filmmaker–never an easy way to make a living.

During his dives, Foster became acquainted with and intrigued by a resident female octopus, who he began to follow on her forages for food. As he told Time about his daily excursions and the ocean waters where the octopus resided, “When an animal has such an influence on you … you can’t help but love the environment that made her. Going there feels like going home.”

An octopus can teach us many lessons

My Octopus Teacher really hit home emotionally for many viewers. Nature documentaries have been around for many decades, so what made My Octopus Teacher such a sensation? For starters, as The New York Times has noted about this and another documentary about an animal, Gunda: “Both present animals as beings apart from us, not just objects of wonder or scientific study, and with qualities that are all their own, not shadows of human emotions.”

In the case of My Octopus Teacher, Foster’s aquatic friend is particularly remarkable for her ingenuity. She constantly develops tricks to both capture prey and avoid becoming it herself. She helps Foster and the viewer see that as humans, we don’t have a monopoly on qualities such as intelligence. What’s more, as Foster told Time, “She taught me humility. She taught me compassion. She opened my mind to just how complex and precious wild creatures are.”

Foster’s dives gave us other knowledge as well

While Foster’s daily ocean dives gave us the amazing opportunity to learn from his octopus friend and teacher, they also contributed in other important ways to scientists’ knowledge base. One of his most talked-about finds was a new species of shrimp that he discovered during his dives near Cape Town. As National Geographic explains, one of the new shrimp species was a tiny red and white shrimp “about the size of a match head.”

Foster discovered the shrimp after hearing from University of Cape Town marine biologist Charles Griffiths that there might be new species of shrimp to be found at a certain site. Foster spent days hunting through various pools and collecting samples in vials until he eventually came home with an entirely new specimen. Foster’s place in the history of biological discovery was cemented when the new shrimp species was ultimately named after him– Heteromysis Fosteri.

It’s pretty amazing to think that Foster made these contributions to science with a scuba mask and a net. With two such intelligent stars, a man and his octopus friend, it’s easy to see why My Octopus Teacher was a hit with viewers.