Earlier this month, SpaceX was preparing to launch the first all-civilian mission into orbit. Titled “Inspiration4,” the effort stemmed from Shift4 CEO and billionaire Jason Isaacman purchasing four seats in the private space company’s Dragon capsule as a fundraising effort to support child cancer treatment at St. Jude Children’s Research Hospital. He doled out the additional spots to a trio of fellow amateurs, who would join him in orbiting the Earth for three days as they hurtled through the dark void of space at a higher altitude than any astronaut had traveled in over 20 years.

All along, filmmaker Jason Hehir had been documenting the journey for the Netflix limited series “Countdown: Inspiration4 Mission to Space,” with new episodes airing once a week in the buildup to the launch. Hehir had gotten to know the future astronaut subjects so well that even he had trouble considering the scariest question of all: What if the astronauts didn’t survive the mission? “It’s probably irresponsible on my part that we didn’t have a concrete plan for what we would’ve done,” Hehir said in an interview this week. “But we didn’t want to go there.”

Any seasoned astronaut or NASA veteran knows all too well that going to space is one of the most dangerous undertakings a human being can do. In 1986, the Challenger space shuttle erupted shortly after liftoff; in 2003, the Columbia disintegrated on reentry. Even as the privatization of space has opened up new opportunities for non-professionals to experience microgravity and cosmic views of the planet from above, every mission comes equipped with the terrifying potential of failure.

Much as the filmmakers behind “Free Solo” had to contemplate what to do if their daring climber subject fell off a mountain, Hehir did have to consider a contingency plan if the Inspiration4 mission went awry. “It was obviously a radioactive conversation that no one wanted to have,” he said. “We had loose plans for what we were going to do with the final episode but the reality is that SpaceX likely would’ve seized all the footage. I don’t know how we would’ve made a doc with what we would’ve been given. It would’ve been talking heads and felt like a news report. But I am confident we would’ve made an episode.”

Fortunately, that hypothetical never came into play. The hourlong finale of the five-episode “Countdown: Inspiration4 Mission to Space” that comes out this week chronicles how Isaacman, along with child cancer survivor Hayley Arcenaux, geology professor Sian Proctor, and data engineer Chris Sembroski completed a successful three-day mission that brought them up to 575 kilometers above the planet and concluded with their splashdown in the Atlantic Ocean. With the crew’s dazzling 4K iPhone footage at its center, the episode provides the first up-close look at the potential for space tourism that is poised to evolve in the near future. As the giddy crew float around the Dragon capsule and gaze out its expansive cupola, they marvel at the stunning imagery of the globe as they circle its perimeter every 90 minutes.

To date, that experience has been limited to the 600-odd professional astronauts who have gone to space in the last 60 years. While recent efforts by Richard Branson and Jeff Bezos captured fleeting rollercoaster rides into microgravity for a few minutes, the Inspiration4 mission is closer to what the future of private space travel might look like.

The opportunity to capture that story came to Hehir in April, when Netflix executive Gabe Spitzer sent the director a New York Times article about the crew selected for the mission. Hehir said he was reminded of an HBO series he directed, “24/7,” in which he followed a pair of boxers in the days leading up to their matches. Though the original plan was to shoot a six-part limited series that would air next year, they quickly decided to take a page from the earlier project. “I wanted to do this project because of the challenge of turning around a feature-length documentary one week from the events that transpired,” Hehir said. “The first four episodes were all about gaining the trust of these astronauts and their families in order to slowly convince them to let us in.” 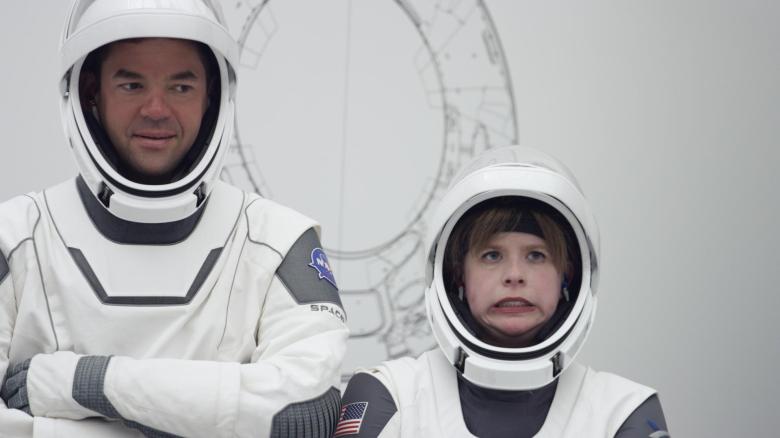 At the time, Hehir knew next to nothing about the latest chapter in space travel. “This space thing was completely foreign to me before this project,” he said, “but I feel like my learning curve has been straight up the wall. I’m now a proud space nerd.”

Hehir most recently won an Emmy for directing the multi-part Chicago Bulls docuseries “The Last Dance,” and saw a similar opportunity with the Inspiration4 story. “The two most important factors in making a great story are characters and stakes,” he said. “Anyone willing to risk their lives to go to space and be a pioneer is an incredible character by definition.”

The project required access to SpaceX facilities. While Elon Musk appears in the series, he’s largely a supporting character in a project focused on the impact of the mission on the astronauts and their families, though SpaceX technology takes centerstage. “It really was about developing a relationship with SpaceX where they trusted us and we could get quick turnaround and feedback from them,” Hehir said. “There was some proprietary technology they didn’t want us to show, but it was stuff we never considered, like blurring out two digits on a piece of metal. Who knows what that is?”

While the previous space race unfolded against the backdrop of the Cold War, the new one has found its way into a competitive media landscape on a global scale. On October 5, Russia’s Soyuz MS-19 spacecraft will launch filmmaker Klim Shipenko and actress Anton Shkaplerov to the International Space Station, where they will spend 12 days shooting a movie with the working title “The Challenge.” Next spring, the winner of the upcoming Discovery+ reality series “Who Wants to Be an Astronaut?” will go on a similar journey on another SpaceX Dragon capsule. And Tom Cruise and director Doug Liman have joined forces with Universal for a secretive undertaking that will reportedly take place at the ISS as well, though details are scant and it’s unclear when that production will move forward. However, Cruise appears to remain invested in the opportunity, as SpaceX reported during the Inspiration4 mission that the actor actually called the crew to speak with them during the mission.

That conversation, however, did not make it into Hehir’s series. “It’s cool that Tom Cruise called them, but I don’t really care about celebrities,” he said. “I wasn’t missing that. It was never even a consideration.”

Netflix may have bragging rights with the first limited series shot in space, and Hehir made the most of that access by foregrounding the footage from the cupola, which includes intimate and personable moments as the crew capture themselves floating against a backdrop than in any other context would register as science fiction. Hehir trained the astronauts to record themselves in advance of the launch, with one specific iPhone. “There was one phone designated as the Netflix phone,” he said. “We had coached them on how to interview each other, what questions to ask each other, and how to make a documentary. We were at the mercy of people who have a lot of other things to worry about besides producing a documentary. Luckily, they nailed it.”

Hehir had to scramble to make the most of the footage. After the crew arrived back on Earth, he followed their convoy to the Space Force base at Kennedy Space Center, where the crew had to undergo medical tests. “Someone walked over to me and I rolled my window down,” he said. “They gave me the four phones that were in space with them and said, ‘I need these back ASAP.’” He dashed back to his condo and transferred the videos to his computer. “It’s the best photography ever taken in space by an astronaut,” he said, adding that the crew deserved an award for their cinematography. “It’s the most ambitious cinematographic achievement I’ve been a part of,” he said. “These people should be listed on the list of cinematographers. They captured stunning images.”

As more filmmakers eye the potential of sending cameras to orbit, Hehir said there was plenty of room for followups. “There’s always going to be ample opportunity to tell stories about people who are willing to go up there and risk their lives for the future of humanity,” he said.

And yes, he would be open to going up there, too. “I would not have five months ago,” he said. “But I told Gabe last night that if we did something like this again and needed someone up there on a larger mission, I would go.”

“Countdown: Inspiration4 Mission to Space” is now available to stream on Netflix.