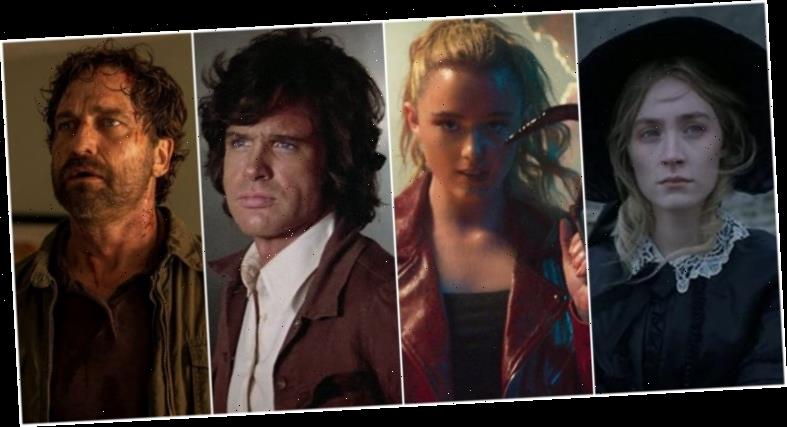 It’s Blu-ray time! Put the kettle on, boil some eggs, lock all the doors, and gather around as I tell you about the wonderful world of physical media. This week’s Blu-ray round-up includes the historical romantic-drama Ammonite, the body-swap horror-comedy Freaky, the paranoid classic The Parallax View, and the very surprising disaster pic Greenland.

When it comes to Ammonite, comparisons with Portrait of a Lady on Fire are inevitable. Both are historical romantic dramas about women engaged in a lesbian relationship against a seaside backdrop. And both come from distributor Neon. Whether or not Neon welcomes such comparisons is not for me to say, but releasing Ammonite so soon after Portrait of a Lady on Fire might have hurt the film. Because the passion that burns up the screen in Portrait is severely lacking here. Where that film was gorgeous and sweeping, Ammonite is cold and flat.

To be fair: Ammonite is under no obligation to be Portrait of a Lady on Fire 2.o. But even if you remove the comparison, it can’t be denied that Ammonite is lacking. Based (loosely) on the true story of British paleontologist Mary Anning, Ammonite finds Kate Winslet playing Anning as a no-nonsense loner. She has no patience for other people and would prefer to spend her time roaming along the coast looking for fossils. But Mary’s go-it-alone lifestyle is abruptly turned upside down when she’s tasked with caring for the melancholy Charlotte Murchison (Saoirse Ronan). Charlotte’s husband all but abandons her to Mary’s trust, and when Charlotte catches deathly-ill, it’s up to Mary to nurse her back to health. A romance is kindled between the two women, but even though it can’t be denied that Winslet and Ronan are fantastic performers, they fail to generate a spark. We simply do not buy their romance.

Director Francis Lee frames all of this with an appropriate wet grunginess to adequately display the sea-side setting, but Ammonite ultimately feels as cold and lifeless as the stones Mary digs up.

This is a rental. I sincerely doubt Ammonite is the type of movie you’re going to want to revisit anytime soon. It’s worth checking out for Winslet and Ronan’s performances, but after it’s over, you’ll probably be done with it. Rent it and move on.

The best slasher movie since Scream, Freaky was one of 2020’s best surprises. I was already a fan of co-writer and director Christopher Landon because of his Happy Death Day films, but even I was unprepared for how successful this body-swap horror-comedy ended up being. Working with co-writer Michael Kennedy, Landon has crafted a funny, gory, and surprisingly sweet film that goes for broke and wins you over in the process.

Kathryn Newton is Millie Kessler, a shy high schooler still reeling from the death of her father – and her life is about to get a lot more complicated. One night, Millie is attacked by the Blissfield Butcher (Vince Vaughn), a serial killer who has been lurking about. The attack doesn’t go as expected, and through a series of unlikely but completely acceptable events, Millie and the Butcher switch bodies. Now, Millie is walking around inside the body of a very tall, scary guy, and the Butcher is inhabiting the body of a teen girl.

Needless to say, Millie wants to get back in her own body. Meanwhile, the Butcher adapts to his new teen girl form, and while he’s not as hulking and strong as he used to be, he still finds inventive (and bloody) ways to bump of anyone who crosses him. Nestled amidst all this hack and slash is a movie with real heart, and the elements about Millie dealing with her father’s death, mixed with a sweet romantic subplot involving Millie and her crush (Uriah Shelton) elevate Freaky into something genuinely special. And Newton and Vaughn are both dynamite here, particularly Vaughn, who has a lot of fun pretending to be a frazzled teenager.

Without question, you should own Freaky. It’s a wonderful movie that holds up on repeated viewings (trust me, I’ve seen it several times already). It’s worth the purchase, and it’s worthy of a place on your Blu-ray shelving unit of choice.

The second entry in Alan J. Pakula’s Political Paranoia trilogy (the first was Klute, the third was All the President’s Men), The Parallax View hit theaters mere weeks before Richard Nixon resigned. It arrived at a time when trust in the United States government was at an all-time low, and fear and paranoia swarmed around American institutions. And the film has aged masterfully.

A bleak, nightmarish story about crashing up against absolute power and being helpless to do anything about it, The Parallax View opens with a stunning, disturbing political assassination atop the Seattle Space Needle. A potential presidential candidate is gunned down, and the assassin ends up falling off the Needle in the scuffle. Three years later, multiple witnesses to the assassination have turned up dead themselves, and a paranoid reporter named Lee Carter (Paula Prentiss) turns to another reporter, Joseph Frady (Warren Beatty), for help. Frady shrugs off Lee’s fears as paranoia, but when she turns up dead, too, Frady begins to think there’s something there.

And there is. There’s a mysterious corporation that seems to specialize in political assassinations, and Frady wants to infiltrate them and blow the lid off the story. But he’s way out of his depth, and the walls start closing in. The Parallax View is often quite thrilling (there’s a great chase scene), and even funny (Beatty really leans into his character’s sardonic nature). But ultimately, The Parallax View is almost crushingly dark. It’s a film that pulls the curtain back and makes us realize we never should have looked back there to begin with – because the truth will do nothing but damn and doom us.

You must own this. The Criterion Collection release gives The Parallax View the restoration it richly deserves, and watching it will remind you of an era where Hollywood would dare to produce things like this. The film might ultimately depress you, but you’ll be enthralled, I promise.

At this point, you tend to know what you’re getting into with a Gerard Butler movie. That’s not a knock on Mr. Butler – he’s good at what he does! And what he usually does is, well, trash. The actor tends to gravitate towards trashy, mid-budget action pics, many of which are destined for VOD. So when I heard Butler was appearing in a disaster movie, I had a pretty good idea what I was getting into.

I was wrong. As it turns out, Greenland is not a movie where Butler plays a tough guy kicking some ass and maybe saving the world. Instead, Greenland is a shockingly harrowing portrait of what would probably really happen if a planet-killing comet was headed straight for us. Yes, there are a few shots of cities being leveled by big balls of fire. But mostly, Greenland is a surprisingly intimate character piece, and it does a disturbingly good job of showcasing how humanity would deal with its impending doom.

Butler plays a structural engineer who learns he’s been selected to shelter in a bunker in Greenland with other select people (the logic being that since he knows how to design buildings he can help rebuild the planet). But a series of nerve-shredding events prevent Butler and his family – Morena Baccarin as his wife, Roger Dale Floyd as his son – from boarding a plane to get to the bunker. Separated, the family has to find their way back to each other, and then find a way to potentially survive as the comet hurtles towards Earth.

The results are incredibly well-done. Greenland is often pulse-pounding, and there’s an existential dread that blankets the entire movie. At one point, a scene cuts to someone from the military being interviewed on TV less than 24 hours before the final comet is about to strike. As the military man puts it, everyone is working to maintain as much order as they possibly can while also knowing that in a few hours it’ll all be meaningless. Just hearing it spelled out so bluntly like that caused me to have something akin to a mini-panic attack. Usually, disaster pics revel in the destruction and don’t pause to think about the loss of human lives. Greenland does the opposite, and the end result is effective.

Going to go with “own” on this one, gang – but a warning: do not go into Greenland expecting some dumb, mindless disaster porn. I turned my Blu-ray copy on late the other night, assuming I was plunking down for some mega-cheese that I didn’t have to get too emotionally invested in. I was wrong, and it left me emotionally drained. That’s a good thing! I’d rather come away completely caught off-guard by a movie than get something predictable. But I almost feel like this movie should come with a big disclaimer on the cover that shouts THIS IS NOT YOUR TYPICAL GERARD BUTLER MOVIE.